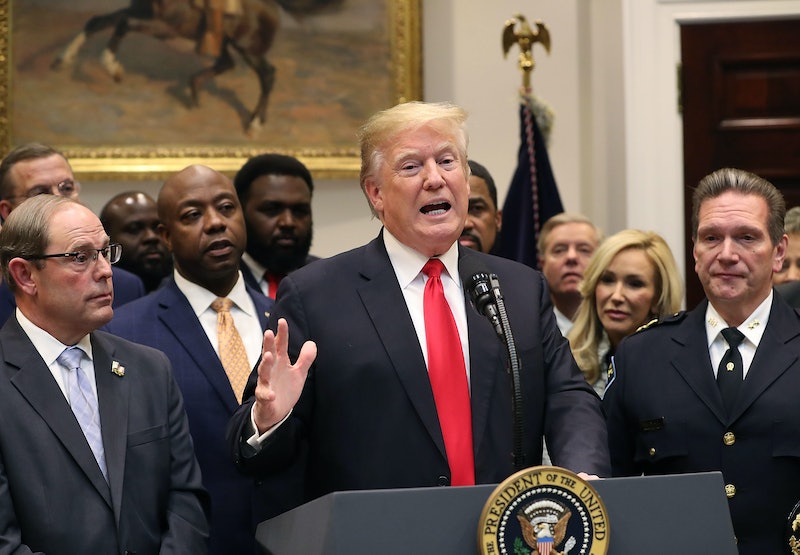 On Wednesday, Donald Trump backed a criminal reform justice plan that was developed by Jared Kushner and a bipartisan group of lawmakers. For those wondering what the "First Step Act" does, it's a program that's designed to improve rehabilitation programs for former prisoners, and to give judges more wiggle room when sentencing offenders for nonviolent crimes like drug charges. Though Trump's support was not necessarily required at this stage, USA Today reports that supporters of the bill hoped a virtual signature by POTUS could move the legislation's approval forward on a fast track.

Trump announced his support on Wednesday at a press conference, saying that the legislation would hopefully "make our communities safer and give former inmates a second chance at life after they have served their time." He also praised the bipartisan efforts that went into the creation of the act, saying, "Did I hear that word 'bipartisan'? Did I hear that word? That's a nice word." And that's what it is: a first step, but it's a very big first step.

Trump's actual signature will only come through once the bill goes through the Senate. But he made his support for the act extremely clear, which might have the effect of further swaying Senate Republicans toward supporting the bill.

"Today’s announcement shows that true bipartisanship is possible,” Trump said. “This is a big breakthrough for a lot of people. ... They’ve been talking about this for many, many years.”

On its official site, the First Step Act breaks down all of the ways in which it would work to change the lives of those impacted by the prison system. If implemented, for example, it will fix good time credits, "ensuring that incarcerated individuals can earn the 54 days of good time credit per year, and not just the 47 days that BOP currently allows."

It will also put incentives programs in place for prisoners and former prisoners who participate in programs, allowing "for 10 days in prerelease custody for every 30 days of successful participation, with no cap on the prerelease credit that can be earned."

Other benefits to the program will include: the prioritization of "medium to high risk" inmates, since they pose the highest risk of committing a crime again; the expansion of "life-changing classes" available to prisoners; the enhancement of "dignity" for women (including offering tampons and sanitary napkins to women, free of charge); the expansion of "compassionate release," and more.

The First Step Act was introduced by Sens. Sheldon Whitehouse (D-R.I.) and John Cornyn (R-Texas), and has already been approved by the House of Representatives. Now, it will have to pass the Senate's approval. The New York Times reports that Sen. Mitch McConnell has confirmed that he will offer the bill up on the Senate floor if it has the support of at least 60 senators.

The lawmakers behind the First Step Act will have until mid-December to get the bill passed before Congress breaks and a whole new slew of politicians come into the mix. If it does pass in the Senate, then Trump will be able to sign it into law for real, this time.