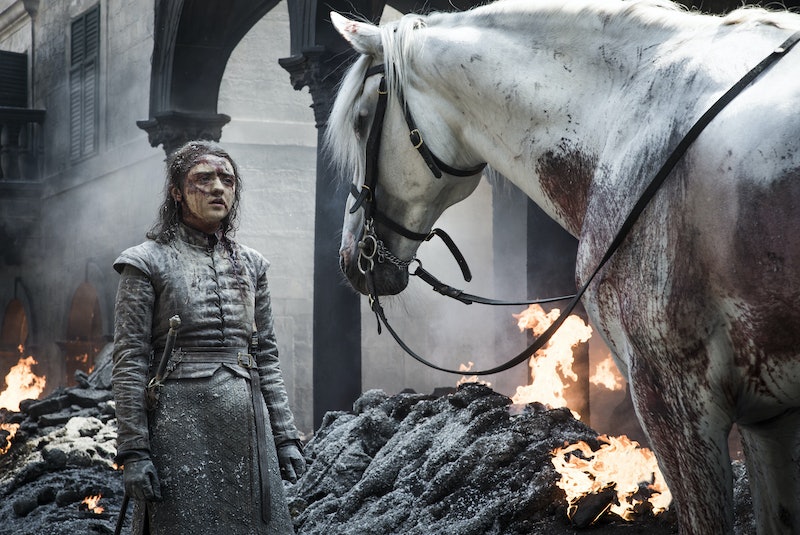 Spoilers ahead for Game of Thrones Season 8. Nothing like a little symbolism on Game of Thrones to bring some much-needed hope to a bleak episode. Arya narrowly escaped Daenerys' siege of King's Landing in "The Bells", and had a surprising last-minute helper. But what does the horse mean on Game of Thrones? Arya's ride came out of nowhere.

When Arya finally rose from the rubble of King's Landing, ash falling around her, a white horse appeared. She hopped on, and high tailed it out of the city. Does it mean anything? Time to dig deep into Horse Girl Internet™ to find out.

It's possible that this was just a pretty, cinematic shot to end the episode. Sometimes the cinematography is just so good that you start to look for hidden meaning in everything when it comes to this show. However, white horses pop up in mythology a lot, so it's worth a gander. They can mean wisdom, death, or the end of the world. Arya, as someone who both worships and eschews the God of Death, may hav become a horseman of the apocalypse in her own way. Has Arya become Death, personified? There's also, of course, some very Shadowfax-y vibes in this Lord of the Rings inspired series.

It's not the first time that a white horse has been on the show, either. Remember that flashback to Ned and Lyanna Stark's childhood (yes, the one where that thing happened to Hodor) that Bran witnessed? She was riding a white horse then, too, and Arya has been said to resemble her Aunt Lyanna quite a bit. Then again, Daenerys rode a white horse too back in Season 1.

Yes, there are theories already that Bran warged into that horse to save his sister. While that would be really, really cool, it's not the best use of his abilities. Plus, Arya would have noticed the eyes.

If the white horse is a symbol for anything, however, it's hope — both for the realm and for Arya herself. The reason Arya was down on the ground in King's Landing is because the Hound advised her not to devote her life to revenge. Instead, she actually tried to save people rather than killing them.

Now, whether or not she plans to hightail it on that horse out of there or try and assassinate a different green-eyed Queen... that we don't know yet. The horse was just concerned with getting her out of King's Landing. We don't know where they're going next. Arya also, incidentally, rode into the city on a black horse — and trained to become a faceless person in the House of Black and White.

It may be asking too much of Game of Thrones this late in the, well, game... but can Arya please deploy a faceless disguise one last time while also heeding the Hound's advice? He begged her not to get revenge. Beric advised her to live. The white horse may mean that Arya is Death... but it also may be leading her out of darkness and into light. The penultimate episode of Game of Thrones may have been a total downer, but there's still hope.