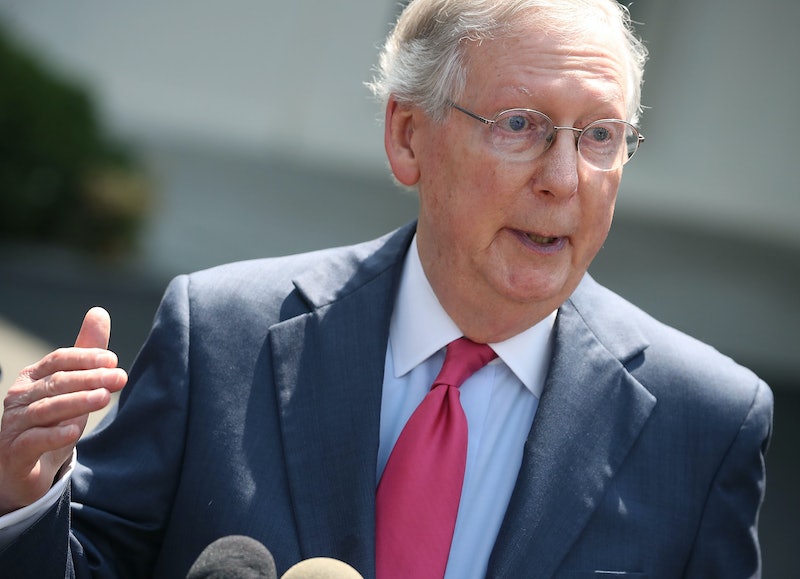 There's lots of talk about a vote on health care in the Senate Tuesday. Senate Majority Leader Mitch McConnell is pushing for a vote on repealing Obamacare and, maybe, replacing it with a GOP alternative. But what that alternative is or whether there will be one is a big mystery. So, what does the new health care bill say? At this point there is no "new" health care bill, only the different versions you've seen before. Whether McConnell can successfully convince the Senate to debate any of them on the floor is yet another mystery.

If you're thoroughly confused, I don't blame you. Basically, the main goal — as espoused by President Trump — is to vote to debate on repealing Obamacare. That requires not only a majority vote in the Senate, but a bill to debate. According to The New York Times, the bill that McConnell plans on opening debate with is the House repeal and replace bill that was passed in May.

If debate is opened successfully with that bill, then all sorts of amendments can be put forward including replacing the bill with other versions. The two that would likely be put forward first are the straight repeal bill and a Senate version of the repeal and replace bill. The repeal and replace bill could be the one you've already seen or another version that's totally different. At the moment, there's no way to know what the new health care bill will say. In fact, Republicans themselves don't even know this. CNN reported that the mystery bill will be discussed at the Senate GOP's weekly lunch Tuesday.

Even getting as far as debating a bill will likely prove to be an uphill battle. The vote will be so close that even Sen. John McCain of Arizona, who was just diagnosed with brain cancer, has come back to participate in the vote. Sen. Susan Collins of Maine is expected to vote no on opening debate, and there are another several senators who have expressed their doubts about supporting the opening of debate too.

President Trump is pushing hard to make the issue come to a vote. He spoke on the matter Monday and tweeted some highlights of his remarks. "Any senator who votes against starting debate is telling America that you are fine with the Obamacare Nightmare," Trump tweeted out as the caption to a screen grab from his speech. The speech was even more intense. The president is going all in with the pressure:

To every member of the Senate I say this: The American people have waited long enough. There's been enough talk, and no action. Now is the time for action.

Depending on what is actually put forward, action could be detrimental to the president's goal of repealing Obamacare. If a vote is called and fails, taking up the issue again could be nearly impossible, especially if senators don't know what they're voting for sooner.