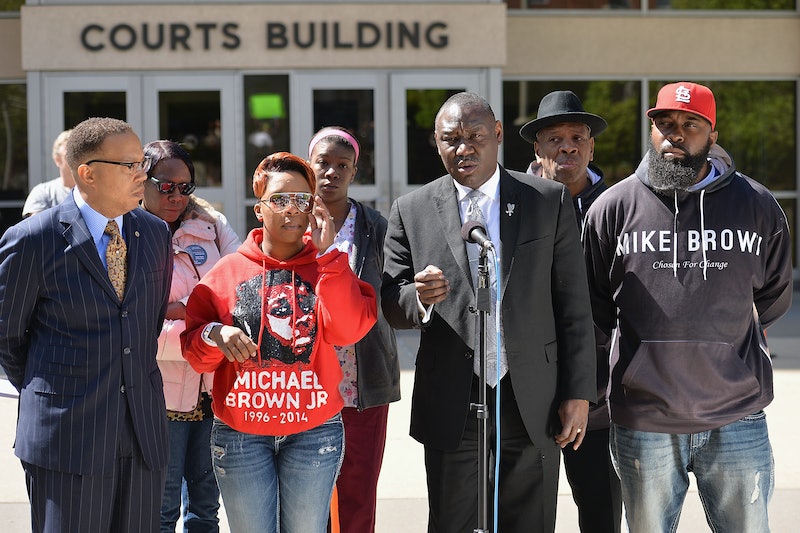 It's been two and a half years since Darren Wilson shot and killed Michael Brown, sparking national outrage and awareness surrounding police shootings of unarmed black Americans. But there's been a new development in the case, with newly released footage raising questions about what actually happened the night Brown was shot. So, what does the new Michael Brown video show?

Ferguson Police have said that Brown was a suspect in a robbery that took place at a convenience store shortly before his killing, and released footage from that store's security camera that seems to show Brown shoving an employee and taking two boxes of cigarillos. The new footage, which is featured in the documentary Stranger Fruit, is also from that security camera, and while it's not conclusive, it seems to suggest that Brown wasn't actually robbing the store.

St. Louis County police chief Jon Belmar told the St. Louis Post Dispatch that he didn't know Brown had been in the store the day before his shooting, while former Ferguson police chief Tom Jackson told the paper that he hadn't seen the footage in question.

The newly released video appears to depict an exchange between Brown and the convenience store's employees. In the footage, which was taken the day before his shooting, Brown enters the store and hands a small item to one of the clerks behind the counter; Jason Pollack, the documentary's director, suggests that this was marijuana. The clerk smells it, and then a different clerk puts two boxes of cigarillos in a bag and hands them to Brown. Brown begins to leave with the bag, but then stops and gives the bag back to the employees, who stash it behind the counter.

This raises the possibility that, in the footage the police released, Brown wasn't actually robbing the store, but rather attempting to retrieve the merchandise he'd received in a trade. According to Pollack, the St. Louis County Police's report on the incident notes that Brown entered and exited the store that night; however, it omits the details of his interactions with the clerks.

In a statement, the lawyer for the convenience store disputes that there was an exchange of any kind between Brown and the employees.

“There was no transaction,” Jay Kanzler told the New York Times. “There was no understanding. No agreement. Those folks didn’t sell him cigarillos for pot. The reason he gave it back is he was walking out the door with unpaid merchandise and they wanted it back.”

It's still impossible to say for certain what happened in either of the two videos, as they are grainy and silent. Moreover, although the new video might recontextualize the earlier footage of Brown at the store, it doesn't resolve the more important question of what exactly transpired between Brown and Wilson. But it certainly casts doubt on the claim that Brown was robbing that convenience store.

More like this
Joe Lycett Just Took HIs David Beckham Qatar Protest To A Whole New Level
By Sophie McEvoy
Footballer Jake Daniels Shared His Thoughts On A World Cup Boycott
By Sam Ramsden
Iran Has Issued A Death Sentence Over Mahsa Amini Protests
By Catharina Cheung, Darshita Goyal and Maxine Harrison
Steve Banerjee's Wife Irene Sold The Chippendales Brand Prior To Her Death
By Brad Witter
Get Even More From Bustle — Sign Up For The Newsletter