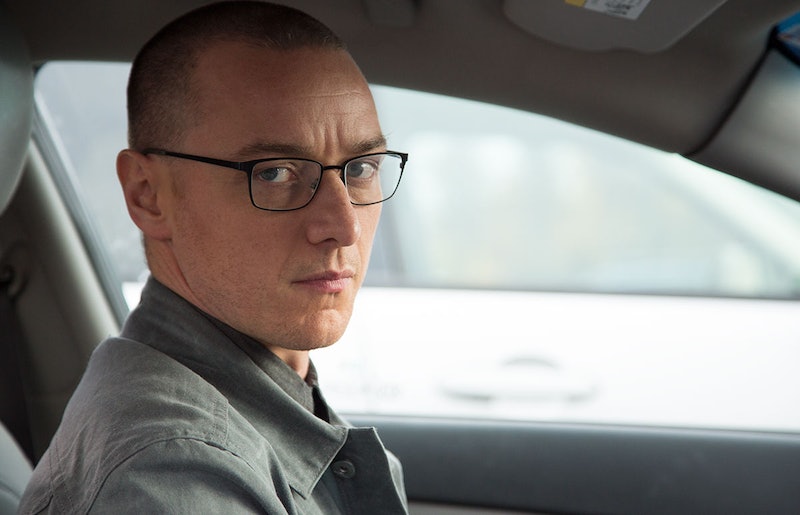 The trailers for the new M. Night Shyamalan movie Split may leave you confused about exactly what genre it falls into. Is it a psychological thriller? Is it a horror film? As with many of the director's previous efforts, it's not quite clear until the end. Split stars James McAvoy as Kevin, a troubled man who exhibits 23 distinguishable personalities. A few of his selves go rogue and kidnap three young women (Anya Taylor-Joy, Haley Lu Richardson, and Jessica Sula), locking them in a windowless, underground room. They're as confused about his intentions as the audience is for much of the movie. Just what does the villain in Split do to his prisoners? If you're worried about being triggered by the film, you may want to have all the information going in. Major spoilers for Split ahead!

First of all, it's important to note that there is no physical sexual violence committed against the teenagers in the film. One of Kevin's personalities, Dennis, makes references to his inappropriate desires but actively fights against them. He's very deliberate about avoiding contact and leaving space and locked doors between them. He also appears to be suffering from Obsessive Compulsive Disorder. He chides the girls for not properly cleaning their bathroom, and when any of them dirty an item of clothing, he demands they take it off. This leaves two of the young women partially exposed, though he does not comment on their state of undress or move to attack them.

Side note: Though Kevin doesn't assault the women, flashbacks reveal that Taylor-Joy's character Casey has endured years of sexual abuse at the hands of her uncle and guardian. There's an upsetting scene in which he invites a young Casey to play their favorite animal game, which involves both of them taking off their clothes.

In the present, Casey and her classmates wait to learn what Kevin wants with them. Dennis is supported in his work by two other personalities: the calm and motherly Miss Patricia and a talkative nine-year-old named Hedwig. They're all preparing for the arrival of something. They call it "The Beast," and indicate that they've detained the girls to present as a form of sacrifice. They talk about "The Beast" as if he were a god — stronger, powerful, and more pure than any human.

"The Beast" is Kevin's as yet un-acted upon 24th personality. His therapist believes his brain created his multiple personalities in order to shield Kevin from the pain of the abuse he experienced as a child. "The Beast" is such a strong mental projection that he actually can do the things Dennis and Miss Patricia say that he can. He's even taller and more muscular than Kevin, with the ability to heal himself instantly. He's Kevin's ultimate protector.

But the myth of "The Beast" also requires that he feed on the flesh of the impure, i.e. anyone who has not experienced pain and brutality in their lives. Thus, the end of Split is a bit of a bloodbath. "The Beast" squeezes the life out of his therapist once she learns what he's done. Casey finds him ripping apart Claire and Marcia with his teeth. He's on the verge of doing the same to her when he sees the scars covering Casey's body. She's a victim; pure, like him. He allows her to live, and the movie hints that through the experience, Casey possibly gained the confidence to break away from her uncle.

The Split villain (or villainous personalities) is certainly a killer, but the movie spares its female characters the humiliation of sexual objectification.