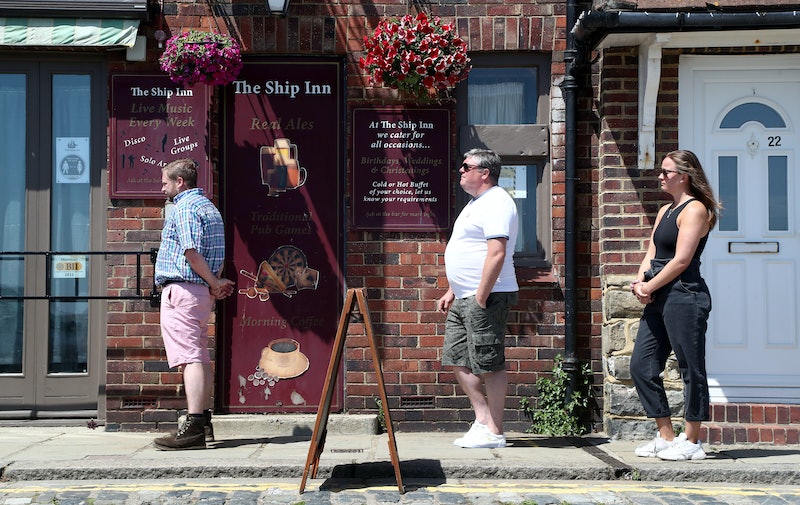 In May 2020, Boris Johnson announced the government's plans to ease lockdown restrictions and, since then, UK residents have slowly been given more and more freedom to see friends and return to normal life. On June 20 it was revealed that the two-metre social distancing rule was going to be changed. But what is the one metre plus rule that the government is now planning to implement, and how will it impact day-to-day life?

According to an exclusive from the Telegraph, the government is planning to roll out a new social distancing rule that would allow people in certain outdoor settings to stand closer together provided other protective precautions were being taken, including wearing a mask. The one metre plus rule will apply to shops, restaurants, schools, offices, and parks among other venues which have had to close due to the pandemic.

Although nothing is confirmed just yet, Chancellor Rishi Sunak has dropped a big hint, telling reporters that he hopes reducing the distance will make "an enormous difference" to businesses "who are keen to see a change." He went on: "Obviously we need to go through that review but I’m very understanding of the calls for action on that, particularly for our hospitality industry, for our pubs, for our restaurants. [They] are keen to see if there’s some change that can be made there."

The Telegraph reported that the government will outline the one metre plus rule on June 23 and that it will go into effect from July 4. It’s also been reported that pubs may be allowed to reopen on July 4 as well as cafés and other hospitality businesses.

However, the government are still being cautious around social distancing, with a Number 10 spokesman telling the BBC: "The reason we are able to move forward this week is because the vast majority of people have taken steps to contain the virus. The more we open up, the more important it is that everyone follows the social distancing rules. We will not hesitate to put the handbrake on to stop the virus running out of control."

More like this
Iran Has Issued A Death Sentence Over Mahsa Amini Protests
By Catharina Cheung, Darshita Goyal and Maxine Harrison
Joe Lycett Just Took HIs David Beckham Qatar Protest To A Whole New Level
By Sophie McEvoy
What To Know About Martin Bashir After Watching 'The Crown'
By Bustle UK
Wimbledon Alters All-White Kit Rule Amid Candid Period Discussions
By Catharina Cheung and Rachel Mantock
Get The Very Best Of Bustle/UK