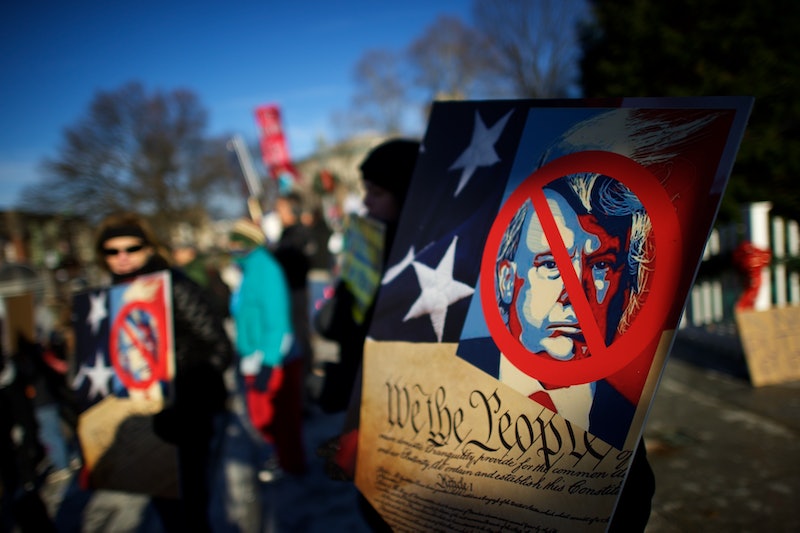 With the presidential inauguration (too) quickly approaching, hundreds of thousands of protesters are preparing to descend on Washington D.C. to voice their objections to Donald Trump's presidency. There's been a lot of talk about the march itself, but not a lot about the movement's purpose. What does the Women's March on Washington want? The march doesn't really have any specific goals, because it's more about solidarity than action right now.

One of the main groups helping to mobilize protestors is Women's March, which describes its mission with a focus on unity. "We stand together in solidarity with our partners and children for the protection of our rights, our safety, our health, and our families - recognizing that our vibrant and diverse communities are the strength of our country," reads the website. Since the march was born in the post-election period of widespread numbness, it makes sense that the whole point is more about coming together than advocating for very specific demands.

However, not all protestors will be completely aligned with this mission, because of the decentralized organization of the march. Though that individualized motivation may make the protest less likely to bring about any tangible change, it also means that the event can be as inclusive as possible. That's an especially good thing since the organizers got in some hot water for appropriating black feminists in the early stages of the planning. Black women planned the Million Women March in 1997, which was also the first name for the protest planned this year, and some women of color argued that the white women organizing the march were ignoring the intersectionality of Trump's social harm. After changing the name of the event, the organizers made their commitment to diversity a central part of the protest.

Though there are as many reasons to protest as there will be protestors, the common thread between them seems to be objection to Trump's win and upcoming presidency. Given everything that Trump said about women during the campaign, women certainly have the right to show up and say that they still won't support him, even as president. The protest is also a chance to inspire more activism and give women the chance to build networks and communities that support further action in the future. Although the march won't be trying to create mass change, it should produce a lot of activism and change in local communities as a result.