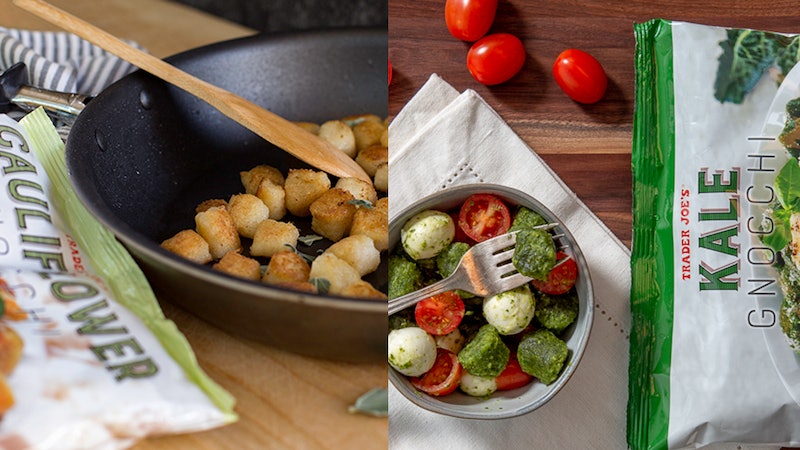 Trader Joe’s appears to be on a mission to go where no gnocchi has gone before. Recently, Trader Joe’s released their new Kale Gnocchi, testing the limits of what we can (or should) consider pasta. If you’re wondering what Trader Joe’s Kale Gnocchi tastes like but don’t want to commit to buying an entire 12-ounce bag, I have volunteered myself as tribute and tried the Kale Gnocchi.

Trader Joe’s is no stranger to innovations in gnocchi science. They’ve got shelf-stable gnocchi, frozen gorgonzola gnocchi, sweet potato gnocchi, Outside-In Stuffed Gnocchi — which, as its name suggests, has marinara and cheese on the inside of each gnocchi pillow — and the beloved cauliflower gnocchi. In 2019, the world was graced with Trader Joe’s Chocolate Lava Gnocchi, a combination of cocoa, hazelnut, and a blatant disregard for the laws of pasta.

Now, they have introduced Kale Gnocchi, with each little dumpling made from potato starch, chickpea flour, a bit of sea salt, extra virgin olive oil and, of course, a bunch of kale. Traditional gnocchi is made primarily with potatoes, flour, egg, and, of course, zero kale. So, does Trader Joe’s new Kale Gnocchi stand up to traditional gnocchi? Does it taste like pasta at all? Will it successfully trick you and your loved ones into, for the love of God, eating more vegetables? I sought to answer these questions in my kitchen.

Let us begin as all pasta meals should with a poem:

This is just to say

because they have the word “kale” in the name

Preparing the Kale Gnocchi is as simple as the packaging suggests. Just heat a tablespoon or two of olive oil in a saute pan over medium heat and throw your lil green gnocchi nugs in there for seven to eight minutes. The next step is to not be alarmed by the appearance of your gnocchi nuggets as they cook. They will look like frozen green gumdrops and you will be tempted to see if maybe, just maybe, they taste like gumdrops as well. Do not do this: you will be disappointed.

I was skeptical of whether my gnocchi would be tender enough and cooked them for a minute or two more. They were probably fine without this additional time. Your gnocchi mileage may vary. The Kale Gnocchi got a little brown and crispy on the bottom which was not typical of other gnocchi but did taste good. (Again, this was likely due to my skeptical user error.)

The result? Without any additional ingredients — just the gnocchi sauteed in some olive oil — the Kale Gnocchi was... pretty delicious. It tasted far less “green” than I thought it would and than its color suggested. The kale flavor was subtle but nice, more of a suggestion of being from a leaf than a loud “SORRY TO INTERRUPT YOUR PASTA BUT IT IS ME! KALE!!!” If I didn’t know it was made with kale, I might have assumed it was spinach or peas or perhaps even just green food dye.

For my final plating — cue dramatic Chopped music — I combined my sauteed Kale Gnocchi with another drizzle of olive oil, halved cherry tomatoes, basil, and torn pieces of a product called — and I cannot stress this enough — Trader Joe’s Mozzarella Cheese Chub. (LOL and furthermore haha.) Despite what my amateur food photo shown above may suggest, it was bomb. It was like a gnocchi Caprese salad — light, savory, but still heartier than if I were to just eat a handful of kale.

If you want to make it slightly more sauce-y, Trader Joe’s blog has a pesto kale gnocchi recipe that is essentially what I made plus a few spoonfuls of Trader Joe’s Vegan Kale, Cashew & Basil Pesto. I suspect it would also taste great with your favorite marinara or even an alfredo to really amp up the gooeyness. There really is no wrong way to Gnocchi.

Is It As Good As The Cauliflower Gnocchi?

I had never tried Trader Joe’s Cauliflower Gnocchi until this test and let me tell you: it lives up to the hype. Admittedly, on its own, the Cauliflower Gnocchi really tastes like cauliflower. Whether that’s a pro or con depends on your particular palate. However, when combined with a sauce, it’s a believable dupe for your standard potato gnocchi.

I combined my Cauliflower Gnocchi with few tablespoons of Trader Joe’s Garlic and Herb Butter Spread. I also dropped a spoonful of garlic and herb butter on the ground which was not part of my intended recipe and would not recommend. Topped with a sprinkle of Trader Joe’s Parmesan, Romano, and Asiago Cheese blend, the final gnocchi dish was a creamy, cheesy, pasta delight.

If you’re looking for something that makes for an accurate potato gnocchi substitute, the Cauliflower Gnocchi beats the Kale Gnocchi by far.

OK But Is It Pasta?

Noodles are my love language. However, I’m not a pasta expert nor is my palate particularly discerning as I will gladly demolish a box of mac and cheese. My assessment of “is it pasta yes or no” is mostly limited to whether the kale gnocchi hits the same way your delicious, carby pasta hits.

Will Kale Gnocchi satiate you pasta cravings? I’m going to say probably not. It’s significantly less dense than your traditional potato-based gnocchi or even the cauliflower gnocchi. Texture-wise, it’s soft and definitely more doughy than you might expect from something kale-based. However, it’s not quite as creamy and doesn’t give you that same potato-y mouth-feel as other gnocchi. That might be a positive, depending on your feelings about potato mouth-feel.

Overall, I give Trader Joe's Kale Gnocchi 3.5 out of 5 gnocchi nuggets. It’s filling without being heavy and makes for an easy but creative dinner. However, it doesn't really taste like pasta. As long as you don't go in with that expectation, you are safe to kale gnocchi as you please.