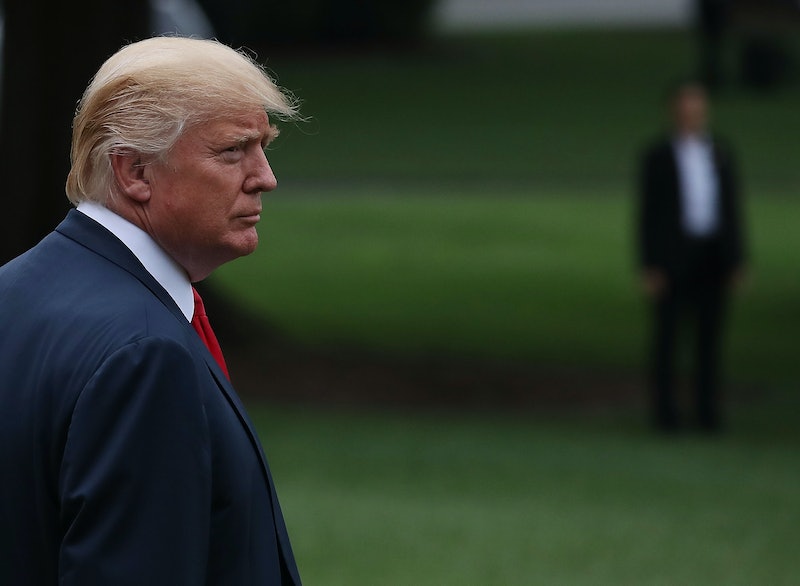 In a testy press conference on Tuesday, President Donald Trump doubled down on his criticisms of both sides of the Charlottesville, Virginia protests and fatal car attack. Additionally, Trump defended the presence of Confederate statues as "history," accusing their opponents of wanting to "change history," and likening Confederate figures like General Robert E. Lee to past slaveholder presidents like George Washington and Thomas Jefferson.

"Many of those people were there to protest the taking down of the statute of Robert E. Lee," Trump told reporters. "So, this week it's Robert E. Lee, I notice Stonewall Jackson's coming down, I wonder, is it George Washington next week?"

Trump expanded on the same point minutes later, challenging a reporter as to whether Washington and former president Thomas Jefferson owned slaves, and whether statues of them should be torn down, as well.

Then, he made it clear what he actually thinks of the effort to remove Confederate statues ― statues not just of slave-owners, but of people who fought an armed rebellion against the American union to preserve slavery at a time it was at-risk of ending ― as an effort at "changing history."

Trump is undeniably, flat-out wrong that the removal of Confederate statues is "changing history," because nothing can change history. It's a matter of fact, and of historical record, that a collection of southern states fought a civil war against the American union explicitly to preserve and continue a system of chattel slavery and white supremacy. You can't undo any of that by removing a statue ― it's indelibly branded into American history, and the impact of it persists into modern American life.

He's quite right, however, that it's an effort to change culture; namely, to do away with glorifying monuments to white supremacy in the former Confederate states, and to treat the memory of the Confederacy, if in spirit rather than law, more like how Germany treats its own dark history of Nazism. It's fairly obvious from the president's remarks that he's not interested in advancing such an anti-racist effort.