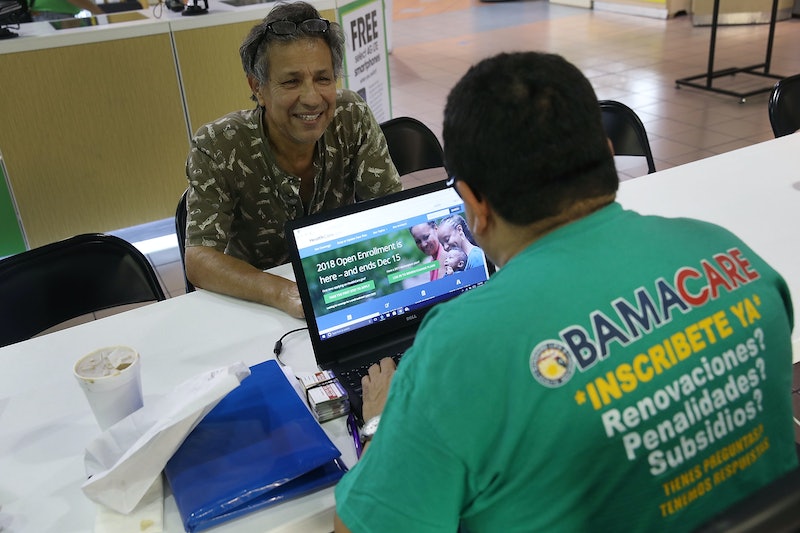 On Saturday, the Trump administration announced that it is freezing key Obamacare payments intended to stabilize the insurance marketplace. Following this announcement, you might be wondering what Trump's freeze on Obamacare payments means for you. Unfortunately for recipients of Obamacare, the suspension of these payments could mean that premium rates increase substantially in 2019.

As the New York Times described, the Trump administration is suspending what are known as risk adjustment payments. These payments are facilitated by the federal government to insurers and are designed to help guarantee that insurance companies don't favor healthy consumers over sicker ones when selling medical insurance.

The suspension of the risk adjustment payments could have substantially negative implications for consumers. As Politico reported, the uncertainty caused by the freezing of the payments could result in significantly higher premiums next year for those who use Obamacare. The Blue Cross Blue Shield Association's President and CEO, Scott Serota, emphasized this point to the outlet, saying:

This action will significantly increase 2019 premiums for millions of individuals and small business owners and could result in far fewer health plan choices ... It will undermine Americans’ access to affordable coverage, particularly those who need medical care the most.

Brad Woodhouse, the director of Protect Our Care, an organization focused on "preserving and improving the Affordable Care Act," echoed similar sentiments to the New York Times. Woodhouse noted that he believes that the Trump administration's suspension of the payments represents another way in which the administration is attempting to undermine Obamacare. “The Trump administration just keeps pushing their destructive repeal-and-sabotage agenda, no matter the cost to the American people,” Woodhouse said to the paper. “Following through with this latest act of sabotage could raise rates for all consumers even more.”

The Trump administration said it would be halting the payments following a decision made by a federal court in New Mexico back in February. The court ruled that the method used to calculate the risk adjustment payments was invalid. However, in January, a different federal court in Massachusetts ruled that the payment method was valid. As a result of the conflicting court rulings, the Centers for Medicare & Medicaid Services, which administers the risk adjustment payments program, said it has asked the New Mexico court to reconsider its decision. However, in the meantime, it is suspending all payments.

As the Los Angeles Times described, risk adjustment payments don't actually cost the federal government any money. Instead, the government merely facilitates the transfer of funds among insurance companies. Companies that insure mostly healthy individuals pay into a pool. These pooled funds are then transferred to plans and companies which insure sicker individuals, in order to compensate for the higher risks and costs associated with this insurance. This helps guarantee that companies will continue to insure sicker people and not just healthy ones.

Slate reported that the federal government's decision to freeze these payments after divergent court rulings is somewhat unprecedented. As the article explained, the government often does not just simply stop enforcing a regulation if one judge makes a ruling on it. Moreover, the government also has the power to issue an interim new regulation, which would allow it to continue facilitating the payments, something which it has not done. As Georgetown University Law Center professor David Super described to Slate, this could be the case because the administration perhaps does not wish to see the payments continue. “They’re doing this because they want to ... They’re doing this because they don’t like these payments," Super suggested.

The suspension of these payments comes just as insurance companies are developing their premium rates for 2019 — and as it remains to be seen whether or not the administration will take any action to reinstate the payments before next year's premium rates are finalized. Either way, many Americans will soon know whether or not the Trump administration's freeze on risk adjustment payments has had an effect on their health insurance costs.

More like this
Twitter Has *A Lot* To Say About The "Single Penalty”
By Sam Ramsden
The UK Government Is *Finally* Banning Conversion Therapy
By Sophie McEvoy
Here’s Where The NHS Nurses’ Strike Currently Stands
By Sophie McEvoy
Watch Jacinda Arden’s Devastatingly Honest Resignation Speech
By Sam Ramsden
Get Even More From Bustle — Sign Up For The Newsletter
From hair trends to relationship advice, our daily newsletter has everything you need to sound like a person who’s on TikTok, even if you aren’t.