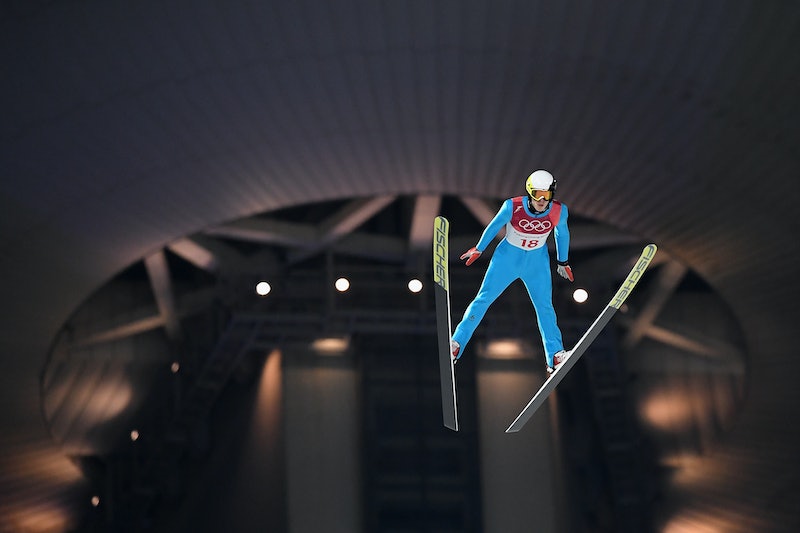 It's simple: The Olympics keeps track of how many games have been held using Roman numerals, and that's what those characters are. The PyeongChang games will be the 23rd Winter Olympics. In Roman numerals, an "I" means "one," and an "X" means "10." Add two Xs, three Is, and you've got 23.

However, it's a bit ironic that the Olympics use Roman numerals — given that they get their name from a festival that was originally held in Greece.

This is the same naming convention that's usually used for the Summer Olympics. However, there have been "gap years" — years in which games should have been held, but weren't.

In the 20th century, several Winter and Summer Olympics were cancelled due to the outbreak of world wars. The Summer Games of 1916 were canceled in light of World War I (the Winter Games didn't start until 1924). And there were no Winter or Summer Olympics in 1940 or 1944, thanks to World War II.

The Winter Olympics returned in 1948, after the world stopped warring with itself. These would have been the seventh Winter Games, but thanks to the two canceled games, they were merely the fifth. So, the 1948 Winter Games were called "Winter Olympics V," with V being the Roman numeral for "five."

The Summer Olympics went about things a bit differently. Although the Summer Games of 1916, 1940, and 1944 never took place, they had already been assigned host cities (Berlin, Tokyo and London, respectively) and had been given official names when they were canceled. And so, though the games never actually happened, they retained the titles they were given, and the naming order resumed as if the canceled games had taken place.

As a result, the Roman numerals for all Summer Games that took place after 1912 are all technically incorrect. The 1920 Summer Games in Antwerp, for instance, are officially called the "Summer Olympics VII," and because VII is the Roman numeral for "seven," the this should mean that the Antwerp event was the seventh Summer Games. But in reality, they were only the sixth.

There's no such discrepancy with regard to the Winter Games, though. The games in PyeongChang are called "Winter Olympics XXIII," and as that name implies, they're the official 23rd Winter Games.

Roman numerals are believed to have been developed around 500 B.C. (in Rome, of all places). Although they gradually fell out of fashion in favor of the Hindu-Arabic system that we now use, Roman numerals can still be found in some modern-day contexts other than the Olympics.

For instance, the Catholic Church keeps track of Popes using Roman numerals. The same goes for monarchs ("Queen Elizabeth II") and, sometimes, people who have the same name as one of their parents ("Edwin Pobert III").