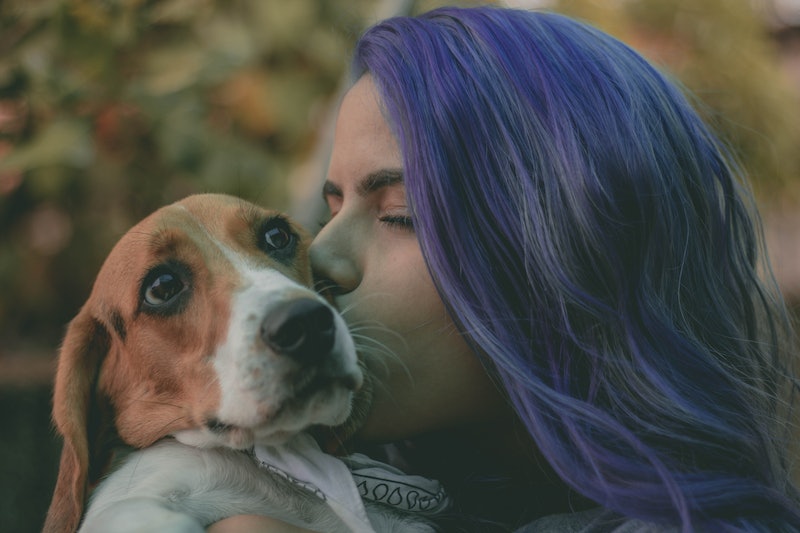 National Dog Day (August 26) is a celebration of all our canine buddies. But recently, "doggos" — a popular internet term for dogs — have proven themselves to be the best, floofiest pups around. In their own words, they bork. They stick out their tongues and do a mlem, a blop. They boop snoots. They bamboozle. Sometimes they are heckin’ concerned.

Most importantly, they are always excellent, a fren to everyone they meet.

Maybe that all sounded like gibberish to you, but this language of “the doggo” is actually a growing internet culture that is gaining popularity not only due to its sheer cuteness, but because of how the language is interpreted as polite, inclusive, and kind by the people who use it.

According to an April 2017 article published by NPR, “DoggoLingo,” as it’s sometimes called, came to be part of the internet vocabulary through Facebook and Twitter pages like Dogspotting (which began to really take off in 2014) and WeRateDogs (founded 2015), which post pictures of dogs alongside descriptions written in their “doggo” language. For example, a heavy dog is “thicc,” the tiny ones are “smol,” and so forth. DoggoLingo mostly involves changing the spelling of standard English words to make them look and sound “cuter” by use of onomatopoeia and extra suffixes.

What NPR and other outlets have found fascinating about this lexicon is how easy it is to transition words like “woofer,” “pupper,” and “pupperino” into spoken language — and one that is easily comprehended by most English speakers. Internet linguist Gretchen McCulloch told NPR, “A new cutesy word for a thing you’re already used to using cutesy words for? That's such an easy entry to vocabulary.”

The way the language highlights and expands this natural tendency, combined with its accessibility even to unfamiliar speakers, makes DoggoLingo one of the most thriving languages on the Internet.

English is a perfectly expressive language, but it doesn’t exactly have the reputation for being inclusive.

And while its cuteness is probably the primary reason for its popularity, DoggoLingo can do so much more. It goes beyond just offering humans new ways to cute-speak. This language is surprisingly diverse and inclusive to all kinds of creatures in a way that, all too often, the English language is not. In fact, there are lessons we can learn from the the language of doggos that could change the ways we communicate with each other, particularly when we talk about diversity and consent.

The memes exemplifying this trend in the doggo language are largely from the Facebook page Bork Bork I Am Doggo. Despite only being active since July 2016, the page already has over 400,000 followers (and is still growing). Mark Wing, administrator and founder, tells Bustle that he created the page after his own traumatic experience to be “a happy place for people to escape to.” He’s a fan of DoggoLingo “specifically because it’s something universal. Everyone loves dogs, and everyone loves to smile and laugh.”

And while Wing didn’t have any expectations for the page to go viral, he’s pleasantly surprised and humbled by the response. He says he often receives messages where “people thank us for making their day a little better, and helping them get through their daily struggles... I like that our page is a small refuge in a world where everyone is mean to each other.”

Bork Bork I Am Doggo prides itself on sharing mostly original work, created by both admins and followers. While many of the posts are pictures of single dogs meant only to be funny, the ones that really stand out for their awareness of inclusive language are the memes where doggos meet other kinds of animals.

Often these images include an introduction between two animals wherein they ask the new creature what it most likes to be called. The doggo always refers to the other animal as “fren" — their word for “friend” — exemplifying a warm way to welcome someone different, as is the case with the above memes featuring a lamb and a wallaby, respectively.

Of the wallaby meme, administrator Kat Higgins-Foster tells Bustle, “I love the doggo’s clumsy attempt at using an expression from the new fren’s native country. The doggo’s heart is in the right place.”

The wallaby and lamb memes were created by administrator Regina McGinty, who says that while the “feel good vibe” in them was intentional, she “didn’t think too deeply” about the warm and inclusive way that the doggos approach diversity until it was pointed out. “I love it,” she says, “but also [I’m] not surprised as it does match our personalities.”

But doggos don't just model excellent communication when it comes to inclusion. The memes created by Higgins-Foster for the Bork Bork I Am Doggo page consistently show dogs asking for — and receiving — consent before touching another animal (in DoggoLingo, this is doing a "mlem" or "boop"). Better still, many memes both support self-identification / accept diversity and ask for consent. They exemplify what it means to be a good fren to everyone, which is a lesson humans can certainly stand to learn from our doggos.

While many people roll their eyes at the culture surrounding the way we discuss race, gender inclusion, and sexual assault, the truth is the language we use when discussing those subjects matters greatly. And where traditional English (and English speakers) sometimes struggle to adapt fast enough — gender-neutral pronouns, anyone? — DoggoLingo, though perhaps a little silly at first glance, often proves to not only be a balm, but also universal dialogue. Most humans share a common understanding about animals, especially our beloved dogs — their hearts are indelibly pure, and the thing that is most important to them is receiving and maintaining our love (also, treats). In fact, we’re actually hardwired to love each other; our brains produce oxytocin (the same hormone produced by new mothers) just by looking into our dogs’ eyes.

For the administrators of Bork Bork I Am Doggo, this connection between how we feel about dogs and the language we assume they speak makes perfect sense. “Because we see animals in such a light of goodness, the language naturally lends itself to the expression of that goodness,” says Higgins-Foster.

And that language is powerful. “English is a perfectly expressive language, but it doesn’t exactly have the reputation for being inclusive,” says Wing. “I see [DoggoLingo] as sort of a cultural middle ground where people from all over the world feel accepted and welcomed.”

Higgins-Foster understands why consent and compassionate curiosity are reoccurring, if subconscious, themes among the doggos memes. “I feel a sense of innocence and morality in the doggos, and I think it comes out naturally in the memes,” she says. “Dogs epitomize unconditional love, purity, and understanding… So, naturally they would be tolerant and considerate. If we create the doggos with a sense of morality and through that comes tolerance and consent, then that tells me [tolerance and consent] are inherently moral and not a matter of opinion.”