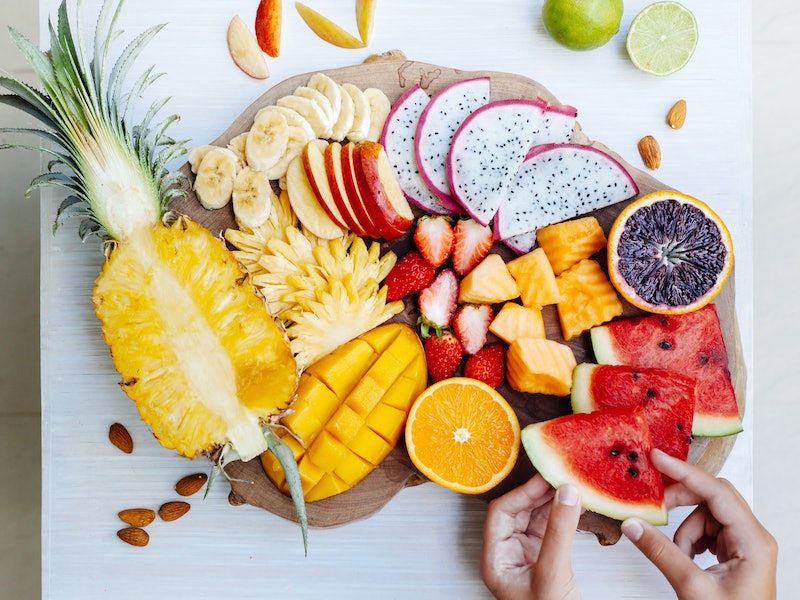 Buying organic isn't always easy. As someone living paycheck to paycheck (thank you, student loan payments), I know what kind of bite paying even a small premium for packages of organic produce can take out of your weekly grocery budget. But there are some foods you should try to buy organic, if you can, and luckily, the Environmental Working Group's (EWG) recently released 2018 Shopper's Guide to Pesticides in Produce lets you know which "Dirty Dozen" foods you should definitely consider buying organic.

According to EWG's summary of its findings for the shopper's guide, tests done by the U.S. Department of Agriculture (USDA) found that "nearly 70 percent of samples of conventionally grown produce were contaminated with pesticide residues." Those residues come from a wide range of pesticides — 230 different ones, according to the USDA's tests.

And the produce those pesticide residues tend to cling to the most? It turns out the number one culprit is strawberries. In fact, the EWG reported, in one single sample of strawberries, testers found 20 different pesticides. Yikes. As for the rest of the Dirty Dozen, strawberries are followed by, in descending order, spinach, nectarines, apples, grapes, peaches, cherries, pears, tomatoes, celery, potatoes, and sweet bell peppers. If you're hoping to shop and take chances that your particular cherry or peach won't have residue, that's unlikely, according to the summary. "More than 98 percent of samples of strawberries, spinach, peaches, nectarines, cherries and apples tested positive for residue of at least one pesticide," the EWG reported.

But if that knowledge freaks you out, know that you don't have to scratch those products off your shopping list just yet. While this information may be new to you, it's not new to your body — by which I mean "Americans still consume a mixture of pesticides every day," the EWG reported in its summary, noting that research has suggested the health risks from consuming pesticide residues are "subtle," and that many dangerous pesticides have already been banned thanks to the Food Quality Protection Act of 1996.

The only way to dramatically lower the amount of pesticides in your produce is to buy 100 percent organic produce, the EWG reported, citing a study by scientists at the University of Washington, which showed that "people who report they often or always buy organic produce had significantly lower quantities of organophosphate insecticides in their urine samples."

However, if going organic isn't an option for you because of cost or availability, you can also take a crack at lowering your pesticide consumption by lessening the Dirty Dozen products you eat, and choosing more of the "Clean Fifteen," aka the foods that had the lowest levels of detected pesticides, which the EWG also released in its shoppers guide. Those would be avocados, sweet corn, pineapples, cabbages, onions, frozen sweet peas, papayas, asparagus, mangoes, eggplants, honeydews, kiwis, cantaloupes, cauliflower, and broccoli. With the Clean Fifteen, "no single fruit sample [...] tested positive for more than four pesticides," and "[m]ultiple pesticide residues are extremely rare. Only 5 percent of Clean Fifteen vegetable samples had two or more pesticides."

If you do buy non-organic Dirty Dozen foods, you can minimize your pesticide exposure by washing them thoroughly with plain ol' water, according to the National Pesticide Information Center (NPIC). There are fruit wash products out there, but "they have not been proven to be any more effective than water alone," according to the NPIC. You should hold your produce under flowing water rather than dunking it, gently rub soft-skinned products, and for tough-skinned products like potatoes, you should scrub them with a brush, the NPIC said on its website.

The takeaway: Pesticides are present in our fresh produce — sometimes a number of pesticides that, when spelled out, can be frightening. But chances are you've already been regularly consuming foods with pesticide residues on them, and you're OK. If you want to take steps to minimize your exposure, purchasing organic produce is your best shot — but if you're not able to, it's definitely not worth stressing over.