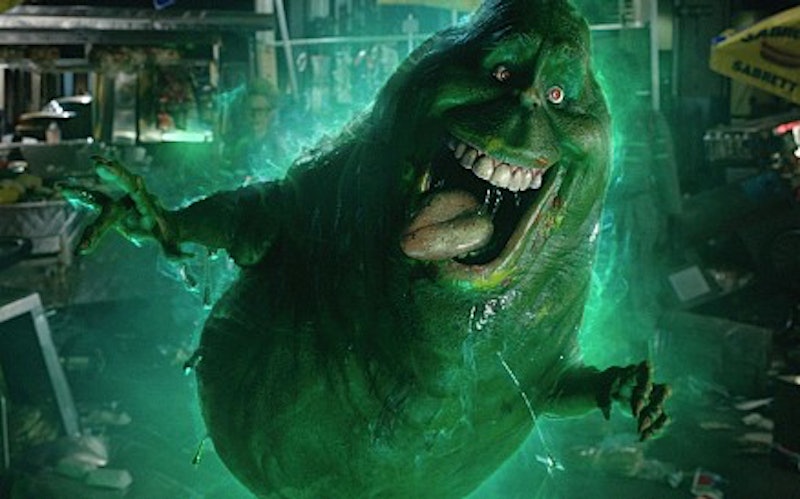 Legends of ghosts — or spirits of the dead that linger in the living world — are common all over the world, but what ghosts look like in different cultures and religious traditions varies widely, from invisible spirits to, well, things I would rather not think about. As disparate as ghosts may be in appearance and behavior, stories about them hinge on the same universal questions: What happens after we die? Is there a soul or spirit that is separate from the body? Can the living interact with the dead? Every culture has its own way of answering.

Compared to some of the ghosts on this list, typical American ghosts seem fairly tame. That’s not to say that Americans don’t have any fun ghosts. North America did invent Slimer, after all, and Ghost Patrick Swayze (which is obviously the very best one of all). But the standard “hazy white figure going bump in the night” just isn’t all that exciting compared to, I dunno, a ghost of a woman’s head with all of her entrails floating behind her. (You can thank Southeast Asia for that one.)

For all the variation there is in ghost tales, one thing that’s clear is that a lot of Americans certainly believe in ghosts of some fashion. In fact, a 2013 poll by the Huffington Post and YouGov found that 45 percent of Americans say they believe in ghosts, or that spirits of the dead can return to the realm of the living. Whether you’re a skeptic or firm believer in spirits returning from the afterlife, there’s no denying that ghost stories from around the world are certainly creative… and also creepy as hell. Read on for 14 ghosts that you would not want to meet in the dark.

A figure in Scandinavian folklore, the gjenganger is a ghost that looks just like a regular (living) person. The malevolent gjenganger (say that five times fast) kills people by pinching them; after the pinch, the victim will turn blue and his or her body will slowly rot, with the heart decaying last. Er, nice, right?

OK, this one freaks me out: In Malaysia and Indonesia, the toyol is a dead fetus that has been brought back to life by black magic. According to The Atlantic, toyols look like little green goblins with red eyes, and they work for their masters, committing theft and other minor crimes on their behalf. To maintain their loyalty, masters give their toyols milk, small gifts, and sometimes their own blood. Toyols also like to suck blood from the toes of people who are sleeping.

The popobawa, or “bat wing,” hails from the island of Pemba in Tanzania. NPR reports that the story of the popobawa emerged only a few decades ago, during a period of intense political upheaval following the assassination of the nation’s president. It usually attacks at night and is known for sexually assaulting its victims, especially men. In 2007, the BBC reported that fear of the popobawa had spiked in Tanzania. “Some men are staying awake or sleeping in groups outside their homes,” the BBC stated. “Others are smearing themselves with pig's oil, believing this repels attacks.”

The krasue is a female spirit that figures into the folklore of a number of countries in Southeast Asia, including Thailand, Cambodia, Laos, Indonesia, and Malaysia (though she sometimes goes by different names). According to Thai legend, the krasue was once a princess who was burned to death. As a ghost, she appears only as a floating head atop a pile of disembodied organs; she roams at night, hungrily eating the blood and organs of cattle and people, and often haunts pregnant women. The krasue has been a popular inspiration for a number of Southeast Asian horror films.

Originating in Romanian folklore, strigoi are vampire-like ghosts that feast on human blood. The Atlantic says that these ghosts were once people "lived or died under unhappy circumstances," meaning that they might have committed suicide or been unbaptized, illegitimate, or (GASP!) unmarried. Strigoi have purple/blue eyes and red hair.

This Brazilian ghost is a tall, thin woman with red eyes and creepy long fingernails, who hangs out on rooftops and watches people eat. If someone falls asleep after a big meal, she’ll sit on his or her chest, waking them and keeping them paralyzed under her. NPR suggests that the folklore of La Pisadeira is related to sleep paralysis, a real sleep disorder in which a sleeper awakes but is unable to move or speak.

Kuchisake-onna, or “the Slit-Mouthed Woman,” hails from Japan. Legend has it that, before she died, her husband cut her face from ear to ear in a fit of jealousy. She came back to haunt the living, and wanders around wearing a covering over her face (such as a fan, scarf, or, in more modern versions, a surgical mask). She asks her victim, “Am I beautiful?” If the victim says, “Yes,” she removes her mask to reveal her mutilated face. There appear to be multiple versions of what will happen next, but they’re not good: She’ll follow by killing her victim or slicing his or her face to resemble hers. If her victim says she’s not beautiful, she responds by cutting his or her face or decapitating the victim with scissors. (Um, I’m terrified. Please hold me.)

Though the Kuchisake-onna legend dates back centuries, it was given new energy in the late 1970s when people reported sightings of her in the Nagasaki Prefecture. Since then, Kuchisake-onna has appeared in a number of Japanese horror films.

A number of cultures have ghosts linked specifically to train injuries. In Bengal and India, skondhokatas are headless ghosts of people decapitated by railway trains. They’re violent, but, thankfully, not terribly intelligent. In Japan, there is Teke Teke, the ghost of a schoolgirl who was sliced in half by a train. As a spirit, she carries a scythe along with the lower half of her body in her arms, making a “tek tek” sound as she moves along (hence the name). If she stumbles across a living person, she slices them in half with her scythe.

In the Mexican story of La Llorona, a woman named “Maria” drowned her children. (The reason varies. Some say she killed them in order to be with a man, who then rejected her; others claim she was jealous of her children.) Having committed suicide after murdering her kids, La Llarona now haunts riverbanks, dressed in white and wailing for her children. Sometimes, she tries to kidnap living children if they get too close.

The Hawaiian Night Marchers are the ghosts of ancient Hawaiian warriors, dedicated to protecting sacred people. They aren’t malevolent, but beware of staring at them directly: To look upon the night marchers is to die. If one of the marchers happens to be one of your ancestors, you’ll be spared. According to Honolulu Magazine, “If you’re already in the path of the night marchers’ trail, legend dictates you must strip naked and lie face down. There’s a rumor that peeing on yourself will keep you alive. Whatever you decide to do, don’t look at them!”

In Indonesian and Malaysian folklore, pontianaks are the ghosts of women who died during pregnancy. Pontianaks have long hair, pale skin, red eyes, and sharp fingernails they use to slice open their victims' stomachs, so that they can feast on their organs. They also like to drink the blood of newborn babies. (Ew.) Pontianaks sometimes find their victims by smelling their laundry, so beware leaving your laundry hanging outside overnight!

Ugh, these creepy baby demons really get to me. Somewhat related to the pontianak, tiyanaks exists in Filipino folklore as the ghosts of fetuses whose mothers died before giving birth. These ghosts become little vampiric demon-babies that lure victims into the forest by crying. Usually the victims get hopelessly lost, but they can save themselves by turning their clothes inside out.

In Jewish folklore, the dybbuk is a ghost that possesses the body of a living person. According to Shoshana Kessock at Tor, “The stories state that it is either a malevolent spirit out to harm an innocent person, or a more neutral spirit out to punish a wicked person for their transgressions. Either way, the defining factor that represents a dybbuk is that they are out to cause harm to their host.” Kessock points out that, contrary to what happens in the 2012 film, The Possession, dybbuks do not attach themselves to boxes or other objects.

In Japan, "onryō" literally translates as “vengeful spirit.” Onryō have the appearance of what they looked like upon death, so often they’ll appear to be maimed or wounded. (Onryō tend to arise from people who had extreme passions in life, such as rage or jealousy, so it’s common for them to have had violent deaths.) There are a variety of specific onryō in Japanese folklore, but one of the most famous is Oiwa, the subject of Yotsuya Kaidan, penned as a play in 1825. In the story, Oiwa is the wife of Iemon, who poisons her so that he can marry another woman. The poison disfigures Oiwa’s face, and when she’s shown her new appearance, she goes mad and accidentally kills herself by running into a sword. Oiwa haunts Iemon, leading him to kill his new wife and her family. Eventually, he runs mad and dies. So, you know, not the happiest of stories. Tales of onryō have served as inspiration for a number of horror films, including 2004's The Grudge.