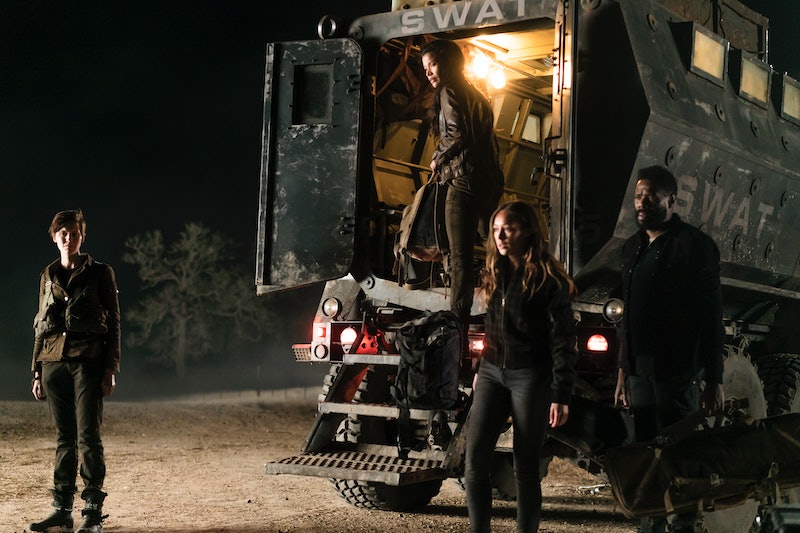 Spoilers ahead for the May 6 episode. Fear The Walking Dead is messing with time this season, to varying levels of confusion and intrigue. For example, Morgan Jones encounters the survivors after a traumatic incident that they aren't quite talking about just yet. What happened at the stadium on Fear The Walking Dead? Viewers are finally getting some answers as to how the group ended up on the road and without their matriarch — but not enough.

There is one major reveal in the May 6 episode, however. Turns out Jenna Elfman's character Naomi is John Dorie's former beau, Laura. Surprise! But it's not a happy surprise, however, as she was apparently unable to get out of the stadium. The group presumes her to be gone now. John believes he can find her again, which gives fans an idea as to where this series is going — but still not where it's been.

So, something bad has happened at the stadium, that much is clear. "Naomi didn't make it out," says Luciana when he asks what happened. "The stadium. Things went wrong." Alicia adds, "She's dead." Althea promises to find out what happened, too.

"I think it’s safe to say that John’s search for her is going to have its ups and downs," said executive producer Andrew Chambliss in an interview with Entertainment Weekly, "and he’s not going to give up, and maybe we will cross paths with her. The when, the where, the how — they’re lots of surprises and, like I said, some ups and downs for John on that journey."

What do fans know about what went down? Not much. It's known that Naomi didn't make it out, and presumably Madison and Cole didn't make it out either. Ennis did not expect to ever see Nick again, and they haven't gone far enough from the Vultures that young Charlie couldn't come and shoot Nick down on her lunch break. Alicia, Luciana, and Strand blame the Vultures for what happened and are ready to exact their revenge.

The rub, as Strand might say, is that the Vultures have posited themselves as passive aggressors. An invasion doesn't seem like their brand of evil. In the episode, the group is starting to split apart as their resources drain and the watchful eyes of the Vultures start to burn. While Madison seems confident that everything is going to work out, it clearly doesn't. Her family is ready to leave again. Strand is hoarding resources in order to run off with Cole. Nick and Luciana are ready to hit the road as well. Things are falling apart all over. The fact that the Stadium Incident results in the group actually staying together may be telling. It must have been really bad for them to close ranks again.

Stadiums are, by definition and for better or for worse, closed in. There are a lot of ways that people could be trapped inside. Maybe they were locked in with a bunch of zombies. Maybe there was a terrible fire, or a storm. Maybe the Vultures were provoked, or got bored, and a siege took place. This mystery is unfolding bit by bit on Fear The Walking Dead.

Surely fans will see what became of the stadium community in an upcoming episode. Some kind of potentially violent, epic, post-apocalyptic happening in a sports arena is too good of a set piece (a film term meaning a big conflict or sequence of scenes typically tied to a specific local and some kind of showdown) to give up for a TV series like Fear The Walking Dead. The reveal of whatever happened there isn't only the answer to may questions, but it also sounds like it might be the most exciting moment of the spin-off series to date.

More like this
‘Squid Game’ Creator Hwang Dong-Hyuk Just Dropped A Major Season 2 Tease
By Brian Anthony Hernandez and Bustle Editors
Everything To Know About 'Evil' Season 4
By Meguire Hennes
Netflix Reveals First Look At Wednesday In The 'Addams Family' Spinoff Series
By Bustle Editors
Who Plays Trent In 'Never Have I Ever'? Benjamin Norris Calls His Character A “Himbo Stoner”
By Grace Wehniainen and Radhika Menon
Get Even More From Bustle — Sign Up For The Newsletter