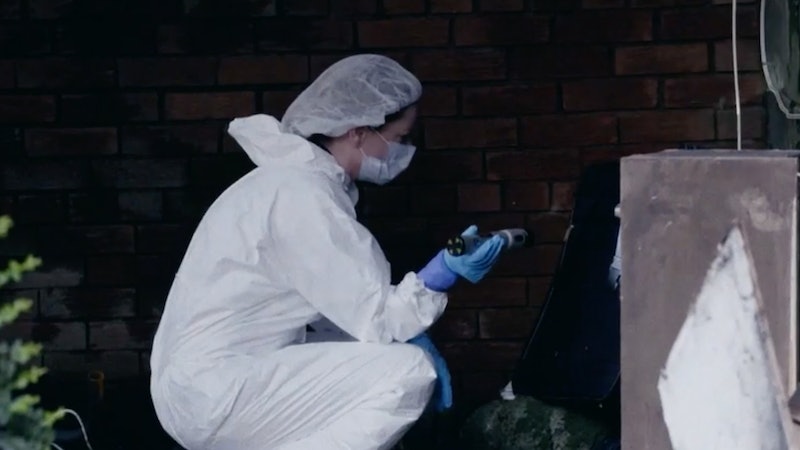 On Feb. 15, 2018, 47-year-old Julie Reilly was reported missing in Glasgow. A lengthy murder investigation resulted, with the search for a body continuing even after the conviction of a man named Andrew Wallace. The story of this major investigation has been told in a three-part BBC documentary, entitled The Disappearance of Julie Reilly. But what happened to her killer, Andrew Wallace?

Earlier on in life, Reilly had suffered a severe brain injury that affected her memory and speech, reports the Daily Record. It is said that she had let Wallace stay in her home with the hope that he could be her carer, per the Daily Star, but the reality of her decision proved to be much darker.

After her family failed to hear from her, Reilly was reported missing. Through CCTV images, police were able to confirm her last recorded sighting in an Aldi supermarket on Feb. 6, 2018. Wallace, then 41, was with her, reports the Daily Record.

It took two months for any trace of Reilly's body to be found, but, in April 2018, a member of the public found some of her remains in their front garden.

As the BBC reports, Wallace eventually pled guilty to murder, receiving a mandatory life sentence in February 2019. The judge gave him a minimum term of 28 years, reduced from 30 due to his guilty plea, describing his actions as an "evil and despicable act."

Tragically, it wasn't the first time Wallace had killed someone. In 1992, at the age of 15, he was found guilty of culpable homicide after stabbing 51-year-old Caroline Packer to death. Her daughter, Roseanne, questioned his release from prison, telling the Scottish Sun: “He destroyed my family when he took my mum and now he has destroyed another family. He should never have been given the chance to do it again. I understand people can’t be locked up for forever, but this shouldn’t have happened again."

The BBC documentary, which first aired on BBC Scotland in June, follows Scotland's Major Investigations Team over the course of 18 months as they piece together Reilly's last movements and ultimately determine what happened.

In the three-part series, DCI Mark Bell discusses the moment where Wallace finally reveals the whereabouts of the rest of Reilly's body. “I requested to see him three months after he’d been sentenced to 28 years in prison," Bell told the Scottish Sun. “I went to Barlinnie in Glasgow to meet him and asked him where Julie was — and he told me." The police officer said "it was a really unique moment in [his] 27 years of service."

“Within hours we found her, on the first go," he added. “It was somewhere we hadn’t looked before; our search parameters actually stopped one street to the west of where she was found.”

Wallace is still believed to be in a Glasgow prison. He won't be eligible to apply for parole until the year 2047; 28 years after his sentencing, reports the Birmingham Mail. At that time, he will be 70 years old.

Reilly's daughter Tiona Hanlon praised the documentary, per the Daily Record. "My family and myself were filmed during the hardest days of our lives, and also the elite murder squad as they searched for my mum and brought her the best idea of justice our system has to offer," she wrote online.

“We got a preview of this documentary a few weeks back. It’s not the easiest thing to watch, but for those that make up what they don’t know or simply loved my mum and was part of her life then I’d give this a watch."

As DCI Bell explained to the Scottish Sun: "Policing isn’t just about putting someone in the jail, it’s about doing the right thing for the victims of crime. There was no way on this earth we would have stopped looking for Julie."

The first part of The Disappearance of Julie Reilly airs at 9 p.m., August 14 on BBC Two.