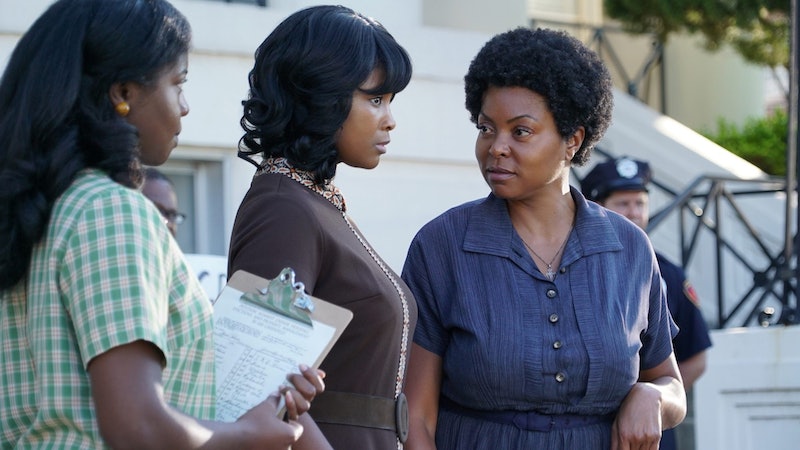 Robin Bissell's new historical drama The Best of Enemies is based on the true story of civil rights activist Ann Atwater and her contentious relationship with Ku Klux Klan leader C.P. Ellis. Taraji P. Henson portrays Atwater in the movie, which is set in Durham, North Carolina in the early 1970s when the two figureheads co-led 10 days of town meetings in an attempt to ensure the non-violent desegregation of local schools by court order. Per The News & Observer, Atwater was ultimately convincing, inspiring Ellis to give up his KKK membership and to support the safety of black students in previously all-white schools, which is where the film ends. But what happened to Ann Atwater from Best of Enemies after she successfully nailed the charrette?

Atwater married Willie Pettiford in 1975 and eventually had two daughters, the late Lydia Green and Marilynn Turner. She continued her grassroots activism work in Durham, remaining a local hero, according to Jonathan Wilson-Hartgrove's book Reconstructing the Gospel: Finding Freedom from Slaveholder Religion.

"Schools and housing developments had been named after her, books and plays chronicled her story, and she lectured regularly at colleges and universities," Wilson-Hartgrove wrote. "But she lived in the same Department of Housing and Urban Development (HUD) housing and did the same organizing work she'd been recruited to do half a century earlier because she was good at it."

Atwater was a mentor and maternal figure to Wilson-Hartgrove, who wrote in his book that she while she wanted to continue the localized conversations of keeping black children in school to defy the odds of incarceration, most people wanted to hear her speak about befriending a Klansman or went to her for help. "This was the Ms. Ann whom folks in Durham still called on when they need something from the powers that be," Wilson-Hartgrove wrote.

In 1981, Atwater began working for the Durham Housing Authority. One yer later, Rosa Parks named Atwater the recipient of the national Women in Community Service (WICS) Rosa Parks Award, as reported by the Carolina Times.

"Ann Atwater was selected from many nominations submitted from across the country because of her extensive voluntary contributions to the poor and the disadvantaged which resulted in a positive influence on the lives of so many people,” said Martha Villalobos, WICS national president, per the publication.

In 1991, after a decade with the Housing Authority, Atwater was injured on the job and retired, receiving medical disability, per the News & Observer. She continued her activism, though, and was a member of the Durham Committee on the Affairs of Black People, an organization that honored her as a peacemaker for their 62nd anniversary in 1997. In 2004, she was given the Durham NAACP award, per Durham Tech, and in 2006, she began working with Wilson-Hartgrove at the School for Conversion as a "freedom teacher," mentoring young people and activists in community organizing.

In 2013, the city of Durham declared December 6 “Ann Atwater Day," according to the Southern Oral History Project at University of North Carolina at Chapel Hill. That same year, the stage version of The Best of Enemies (by Mark St. Germain, based on the book by Osha Gray Davidson) played in Durham and, inspired by the death of Nelson Mandela, Atwater penned a column for the Durham Herald Sun called "What Forgiveness Costs." In it, she wrote about choosing to forgive and befriend Ellis. "C.P. showed me that people can learn to love," Atwater wrote. "We really can be born again, but it means leaving the life we’ve known behind."

By 2013, she was wheelchair bound, joking with WUNC that “[the reasons] I’m not running on the streets and fighting is because I fell and broke my leg in two places and I’m not able to get out, but I can still holler at folks."

Wilson-Hartgrove was at Ann's side when she passed away at 80 in 2016, telling WUNC that at the end of her life, she had been looking forward to the premiere of the film The Best of Enemies, also based on Davidson's book, which she was able to read during her lifetime.

“You know at the end of Ann’s life she was so looking forward to being on this red carpet. Which is the only reason I’m here right now," said Wilson-Hartgrove. "Because she said make sure people know this story, so she was delighted this movie was coming in.”

Until her death, she was an attendee of Mount Calvary United Church of Christ, where she was also the first female deacon. In her final public appearance, the School for Conversion dedicated their Ann G. Atwater Freedom Library in her honor. Her portrait can be seen in the The Durham Civil Rights History Mural and the Art Wall at the Durham County Courthouse.

Atwater appeared alongside Ellis (who's played by Sam Rockwell) in the 2003 PBS documentary An Unlikely Friendship and also spoke with students of a local Durham school for an interview in 2009.

"She was Big Ann and I'm Little Ann," Atwater's granddaughter Ann Nakia Green told ABCC 11, adding that her family stayed close with C.P.. Ellis until his death in 2005. "My grandmother actually did his eulogy when he passed away. We were family and I still look at them as family."

Before her death, Atwater showed off her awards and spoke of her calling to help other people in a video for School for Conversion. "God gave me number one the gift to reach out and touch, and when I feel that somebody called me for some help, God wants me to go on record as saying I tried."

Atwater is buried at the Woodlawn Memorial Park in Durham, North Carolina, not far from her friend C.P. Ellis.