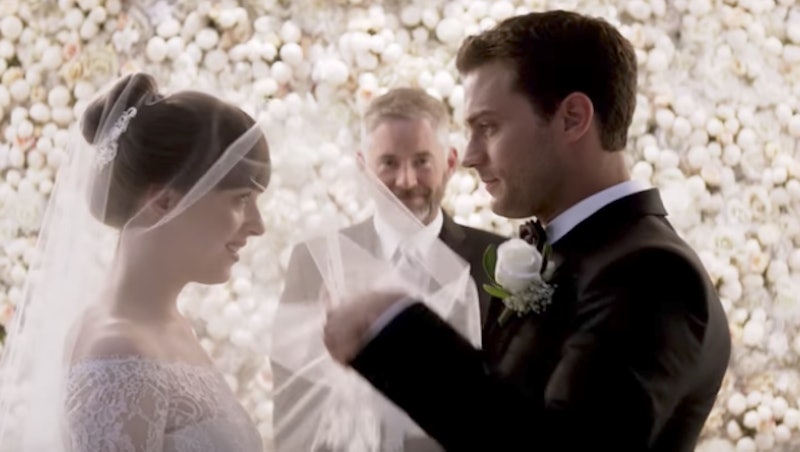 When most people think of the Fifty Shades of Grey franchise, "tragic" isn't usually the first word that comes to mind. "Sexy", or "silly," or even "ridiculous", sure — but "tragic"? Not exactly. Yet if you've paid close attention to the series, you've probably witnessed more upsetting events than you realize, from Jack assaulting Ana to the full story of what happened to Christian Grey's mom. Fifty Shades Freed reveals more info about the latter situation, and the truth about Christian's dysfunctional childhood is actually really depressing.

Spoilers ahead, so if you haven't yet seen Fifty Shades Freed, out Feb. 9, or read the E.L. James book it's based on, stop now — or hey, keep going, if you're someone who's more into the series for the entertainment and sexiness than the twists and turns. So in the first movie, Fifty Shades of Grey, viewers meet Christian's family, including his parents, Dr. Grace Trevelyan Grey and Carrick Grey. In the second movie, Fifty Shades Darker, Ana learns that Christian was adopted, and that his birth mother was a sex worker and drug addict who committed suicide when Christian was young. As a result, Christian entered the foster care system, until he was eventually adopted by Grace and Carrick and brought into the wealthy Grey family.

Audiences knew at this point in the series that Christian had strong feelings of disgust and hatred towards his birth mother, and that, as he told Ana later on, he tended to pick submissive women who looked like her in order to enact a messed-up form of revenge. It's already pretty depressing stuff, but Fifty Shades Freed takes things a step further. In this movie, we learn that when Christian was in foster care, so was a young Jack Hyde. This guy, as we know, grew up to be the dangerous, unstable man who was Ana's boss at the publishing company before being being fired for assaulting Ana in Fifty Shades Darker.

Jack, apparently, has always resented Christian for being adopted instead of him while they were in foster care, as shown by a message he leaves Christian in Freed: "you owe me a life." Jack believes that Christian took his opportunity to have a better, healthier adolescence and adulthood, even though Christian, obviously, had nothing to do with Jack being adopted or not. This resentment — in addition to obvious other mental instability — makes Jack willing to do anything in order to get revenge on Christian, including kidnap his sister and demand millions of dollars. Luckily, Ana, Christian, and the police intervene before Mia gets hurt, and Jack is captured and arrested.

But even after everything is settled, Christian thinks about the fact that he and Jack grew up together, and how different things could've been if they'd traded lives. Ana reassures her husband that he wouldn't have ended up as horrific and violent as Jack, but Christian is clearly unsettled by the "what if" possibility. After all, the men came from similarly troubled backgrounds — Christian with his absent father and drug-addicted mother, and Jack with his dead father and alcoholic mother. Things could've been very different for Christian if he hadn't been adopted by the Grey family.

But of course, this is Fifty Shades we're talking about, so Christian's intense thoughts on his upbringing are quickly overshadowed by his desire for Ana and need to have sex with her, like, right now. But for audiences, learning the full truth about Christian's background, his relationship with Jack, and his connection with his mother adds some depth to his character and some juicy drama to the movie.

More like this
These 25 International Horror Movies On Netflix Prove Fear Is A Universal Language
By Bustle Editors
Harry Lawtey Is Weighing Up The Price Of Success
By Olivia-Anne Cleary
A New Scooby-Doo Movie Confirmed Velma Is Gay & Twitter Is Pumped
By Radhika Menon
Everything You Need To Know About ‘Black Panther: Wakanda Forever’
By Bustle Editors
Get Even More From Bustle — Sign Up For The Newsletter