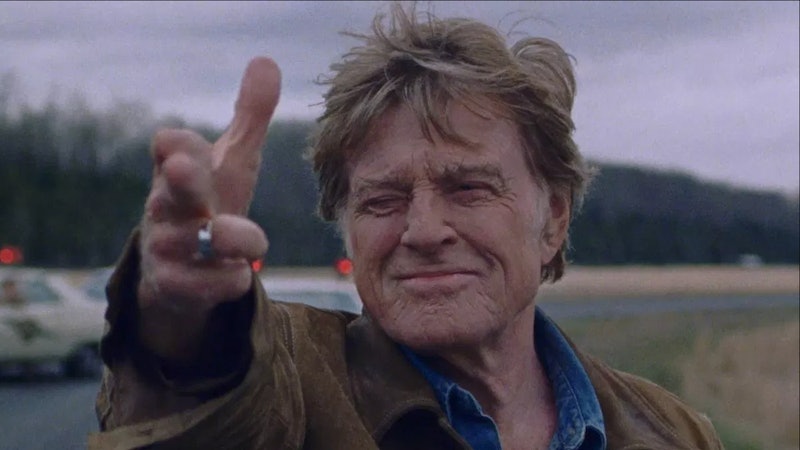 Police caught Forrest Tucker, the real inspiration behind the new movie The Old Man and the Gun, for the last time in 1999. They were shocked to realize the person they'd tailed and cornered for armed bank robbery was a charming 78-year-old man, and their surprise only grew when it came out he had a criminal career spanning over six decades. During his previous incarceration, a seven-year stint at San Quentin, Tucker spent most of his time and energy penning his life story into a script, hoping it would become a Hollywood movie. With the release of The Old Man And The Gun, starring Robert Redford in his last role before retiring from acting, his dream has finally come true. But what happened to Forrest Tucker from The Old Man And The Gun?

As History Vs. Hollywood reports, The film is remarkably faithful to Tucker's life story; with multiple jailbreaks, daring bank robberies, three marriages predicated on keeping his life of crime hidden, and a natural winsomeness that caused even a juror convicting him to say, "You got to hand it to the guy — he's got style", it'd be overkill to do anything but follow it to the letter. He really did form a three-man team of silver-haired scoundrels dubbed "The Over-The Hill Gang" by pursuing authorities, telling David Grann of The New Yorker that at age 60, he'd finally mastered the art of bank robbery.

In 1980, the Over-The-Hill Gang robbed as many as 60 banks in just one year. The gang consisted of John Waller (played by Tom Waits), who'd escaped maximum-security San Quentin with Tucker in 1979; another man with whom they'd built a boat from smuggled supplies and nearly made it past the guard tower before high waves capsized them; a guard who saw their hand-painted outfits and overturned kayak was won over by a joke Tucker made, and let them go on their way; and Teddy Green (played by Danny Glover), an escape artist and fellow bank robber Tucker met during his 1950s stint in Alcatraz. Their key to success was the elderly Tucker's "hearing aid", which was actually a police radio he used to monitor their movements and tell if any silent alarms had been triggered.

After an in-jail quadruple bypass in 1986 and a grant of leniency from a judge, Tucker was released from jail at age 73 in 1993. He settled into a happy life with third wife Jewell Centers who, unlike her movie counterpart (played by Sissy Spacek) had no idea of her husband's criminal career until his 80s arrest, thinking he was a stock broker named Bob Callahan. She stuck by him, but in 1999 he went back for one last hit. As she later told The New Yorker, "He didn’t do it for the money. We had a new car, nice home paid for, beautiful clothes. He had everything." Everything but the notoriety he craved. In the same article he tells Grann, "“When I die, no one will remember me.” Tucker's health was already failing — he'd had several strokes due to blood clots cutting off oxygen, and died in prison May 29, 2004.

In a follow-up to his original article on Tucker, the very one that led to his life story getting turned into an actual Hollywood script, writer David Grann reflected in The New Yorker on Tucker's twilight years that “as he confronted the prospect of dying in jail, alone, he had his own regrets.” Still, it's possible Forrest achieved the kind of immortality he craved with the release of The Old Man And The Gun, coming to theaters Sept. 28.