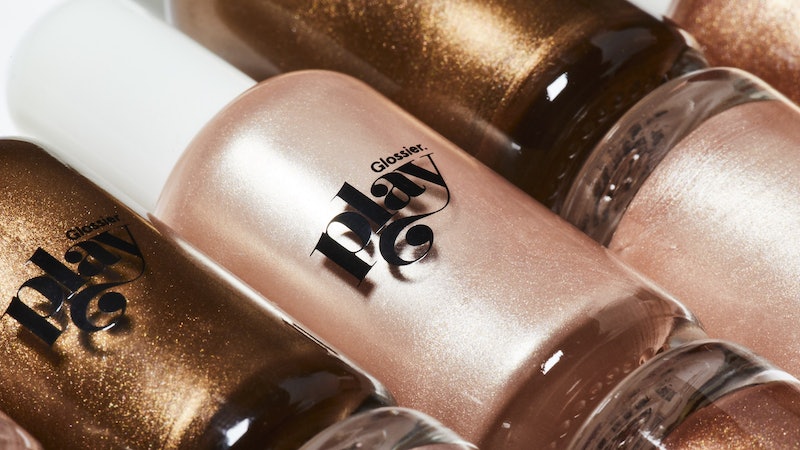 One year ago around this exact time, hyped beauty brand Glossier released a teaser of a mysterious new range. Fans went wild, trying to guess what the minimalist skincare company would come up with next. But, if recent news is anything to go by, the result — a sub-brand called Glossier Play — was underwhelming. As the Business of Fashion reports, Glossier is pausing Glossier Play. And it doesn't look like the line of vibrant makeup is coming back.

So how did a brand that seems to get everything right go so wrong? Was it the criticisms about non-biodegradable glitter and wasteful packaging? A feeling that the products already existed elsewhere? Or the fact that Glossier's fanbase just wasn't into rainbow eyes and high-shine lips?

Lacklustre sales were reported, leading the brand to merge Glossier Play into its main line. Per the Business of Fashion, there are no plans to launch new Play products. Play's Instagram account is now private, and the Glitter Gelée — a widely criticised product — will be discontinued on March 2. (However, the eyeliner and lip lacquer's shade range will be extended.)

Play took two years for Glossier to develop, the brand revealed at launch time. Still, it's hard to ignore the mistakes that were made. The aforementioned glitter gel was condemned, per Harper's Bazaar, for its environmentally harmful ingredients. (Glossier advises washing the product off with a cotton pad and its Milky Oil "to avoid getting glitter into the waterways.")

In a statement, Weiss said it was clear they'd "made the wrong choice," saying the team had been trying to reformulate the gel with bio-glitter. "But ultimately, we haven’t been able to make a product that we love," she added, stating the product's upcoming discontinuation.

The brand also appears to have listened to criticism surrounding Play's excessive foil packaging. In June 2019, the foil wrapper disappeared. Glossier also now allows customers to opt out of 'pretty' packaging, has discontinued its famous sticker sheets, and has started to remove "unnecessary liners" from boxes.

A focus on customer feedback has been a big driver in Glossier's success. So perhaps it's not the environmental issues that spelled the demise of Play, but the fact we didn't need the sub-brand in the first place. As Canadian magazine Flare explains, customers weren't convinced of Glossier Play's originality, likening it to existing products from the likes of Pat McGrath.

Perhaps, in a busy beauty world, Glossier should stick to doing what it does best: releasing formulas that make people's beauty regimes easier. According to the Business of Fashion, that's the exact realisation Weiss has come to.