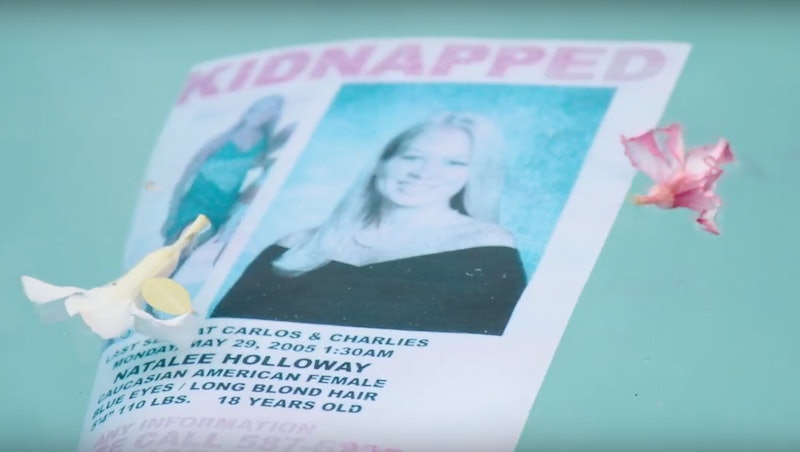 If you were alive and reading the news 12 years ago, then the name “Natalee Holloway” should be inescapably familiar to you: It all but took over the American media landscape in 2005 when she went missing in Aruba. Now her story will once again be told in The Disappearance Of Natalee Holloway, a new six-part documentary series on the Oxygen Network that will explore a new lead in the hunt to solve one of America’s most famous missing persons cases. But will the series be able to uncover what happened to Natalee Holloway?

Natalee Holloway was an 18 year old girl from Mountainbrook, Alabama who disappeared in Aruba during an unofficial senior class trip in 2005. Her story instantly captivated press outlets, law officials, and the general public; according to Court TV, some 700 volunteers and 4,000 Aruban civil servants joined police and FBI agents in searching for her, in what was then the island’s largest search party. Even local divers joined in by sweeping the ocean floor for her remains, CBS News reported at the time. However, no trace of Holloway was ever found, and while many suspects were interrogated and even arrested, no one was ever convicted of any crime relating to her disappearance.

What happened to Holloway remains unclear to this day — in no small part because the prime suspect, Joran Van Der Sloot, has changed his story many times in ways that were easily debunked by authorities. In 2008, he claimed that Natalee Holloway seemingly died of natural causes in a series of videos that were secretly recorded by Dutch crime reporter Peter R de Vries and broadcast on Dutch News. However, Van der Sloot immediately claimed he’d made up the story, and his statement could not be considered a confession. That same year in 2008, Van der Sloot also told Fox News in an interview with Greta Van Susteren that he’d sold Natalie Holloway into sexual slavery, which he also later retracted. (Van der Sloot was arrested twice in connection to Holloway's case but was released both times and never charged with a crime in relation to her disappearance, according to the New York Daily News.)

Now, Van der Sloot is currently serving a 28-year sentence in Peru for the murder of a young woman named Stephany Flores — but that hasn’t stopped him from continuing the muddy the waters of the Natalee Holloway case. In 2012, CNN reported that he’d been caught attempting to extort money from Holloway’s mother, Beth Twitty, in exchange for the location of her body; according to Interpol, the building he pointed to as the site of her remains hadn’t even been built at the time she disappeared.

Despite all the drama surrounding Van Der Sloot, the search for Holloway still continues; her father, Dave Holloway, and private investigator T.J. Ward are currently in the midst of an 18-month long investigation to determine what happened to her, which has been documented by The Disappearance Of Natalee Holloway. They announced in the August 17 episode of the Today show that their recent has led them to the discovery of unidentified human remains, which are now being DNA tested to determine if they belong to Natalee.

In the meantime, Natalee Holloway is now considered legally dead in absentia, as ruled by an Alabama judge in 2012; if she reemerges, that order can be reversed. In any case, hopefully the truth of her vanishing can one day be revealed.

More like this
Anthony Templet Wants To “Live Normally” After Killing His Father
By Brad Witter
The 'Black Bird' Stars Are Both Heading Back To Apple TV+
By Brad Witter
The 'House Of The Dragon' Showrunners Revealed One Key Similarity With 'GoT'
By Grace Wehniainen and Kadin Burnett
An Ultimate Guide To The Music Of 'Rap Sh!t'
By Brad Witter
Get Even More From Bustle — Sign Up For The Newsletter