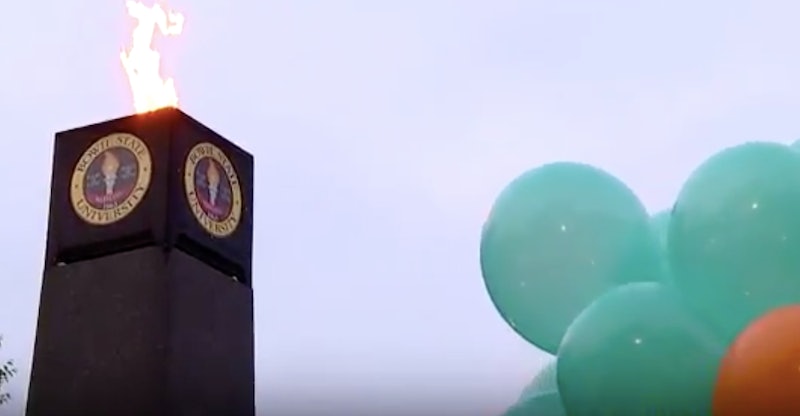 According to The Nation, Collins was waiting for an Uber ride with two friends — both students at UMD — at approximately 3 a.m. on Saturday. It was then that another UMD student, Sean Urbanski, reportedly approached them. “Step left, step left if you know what’s best for you," Urbanski is reported to have said. Collins refused, and Urbanski allegedly stabbed him in the chest. Collins was taken to the hospital, where he died.

Officials have not yet called it a hate crime, but Urbanski was reportedly a member of a racist Facebook group called "Alt-Reich: Nation," the administrators of which argue that the group was founded on satire and not white supremacy. Nonetheless, the group was once notorious for racist — specifically anti-black — and sexist memes.

Collins was set to graduate just three days later, and in the aftermath of his death, Bowie State University — a historically black institution — honored him at the graduation ceremony by draping his gown over a chair. Collins' father accepted his degree in business administration on his behalf during the ceremony.

On Monday, Bowie State held a vigil to honor Collins that was attended by hundreds of people. And on Tuesday, at the commencement ceremony, Collins was on everyone's minds.

"Let us pause now in a moment of silence and contemplation of what each of us might do to promote greater peace, harmony and love that seems to be so lacking in our country and our world today," Bowie State University President Mickey Burnim said.

Collins' classmates, mentors, and friends called for people to reflect on and celebrate his life.

Collins' father told NBC News that while his son was competitive and prided himself on his ROTC involvement, he also had a "loving and giving heart." Collins "would go out of his way, sometimes to my chagrin, to go and help others, but you want to try to encourage that in your children," his father said.

Indeo Ragsdale, a Bowie State junior and a friend of Collins from the school's ROTC program, told TIME that Collins would be "truly missed."

"It's sad that it happened up the street from here, but it's out of our control," Ragsdale said. "We're not focused on the negativity today. We're focused on the positivity. Collins was a joyful person."