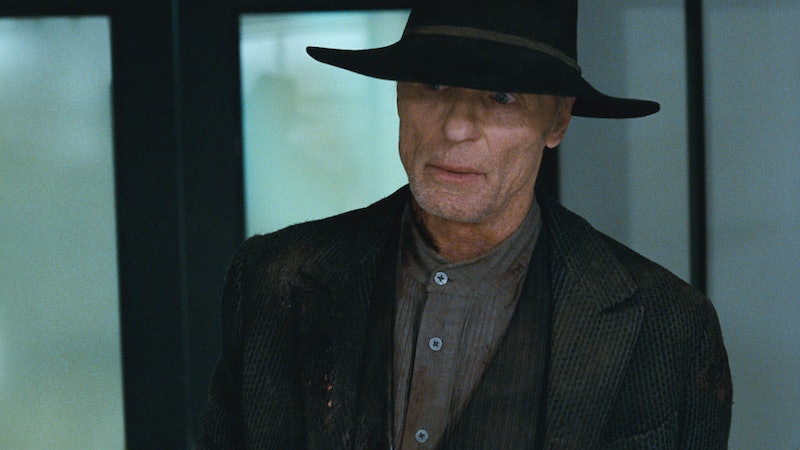 Promos for Westworld Season 3's fourth episode, "The Mother of Exiles," center around the Man in Black's return. That means we'll likely finally get an explanation as to why he's been MIA and allowing Charlotte to dictate all of the decisions at Delos — a company that is now his. But in order to understand his current circumstances, it's important to remember what happened to the Man in Black in Westworld Season 2, which traced his downfall from the kind-hearted William to the cold, cruel antagonist he is today.

Season 2 introduced the Man in Black's daughter, Emily, and revealed the complicated relationship they had developed over the years. She too had a habit of coming to the parks, but the Man in Black was on a different level. He was so obsessed with the game Robert Ford set up for him, he became paranoid that nothing in the park was real —including his daughter. As such, he killed her, believing that she was simply a host created by Ford to torment and distract him from his goal. He later realized his mistake, but by then it was too late.

Afterward, the Man in Black had another run-in with Dolores just outside The Door and became severely injured. He was later seen lying on the beach in critical condition after presumably being found by Delos officials. However, a post-credits scene showed him in what looks to be the distant future, trapped in a loop of the fateful day he killed his daughter and forced to relive it over and over again.

Is this a future host version of the Man in Black? Is Dolores the one controlling this loop? Little is known about how he ended up in this situation, but considering that he appears to be speaking directly to Dolores in the promo, it would be surprising if she wasn't somehow involved in all of this.

So far in Season 3, the Man in Black hasn't been mentioned by name, but a suspiciously empty in chair in the Delos boardroom indicated that his absence wasn't going unnoticed. If he isn't coming to board meetings, what exactly is he up to? It's possible that Dolores has imprisoned him as a pawn in her scheme to infiltrate Rehoboam, or that his future loop is of his own making. Maybe being able to see his daughter in any form, even if it's a painful recreation of the day he killed her, is the only existence the Man in Black can bear anymore.

Whatever the case, Episode 4 should shed some light on where he's been.