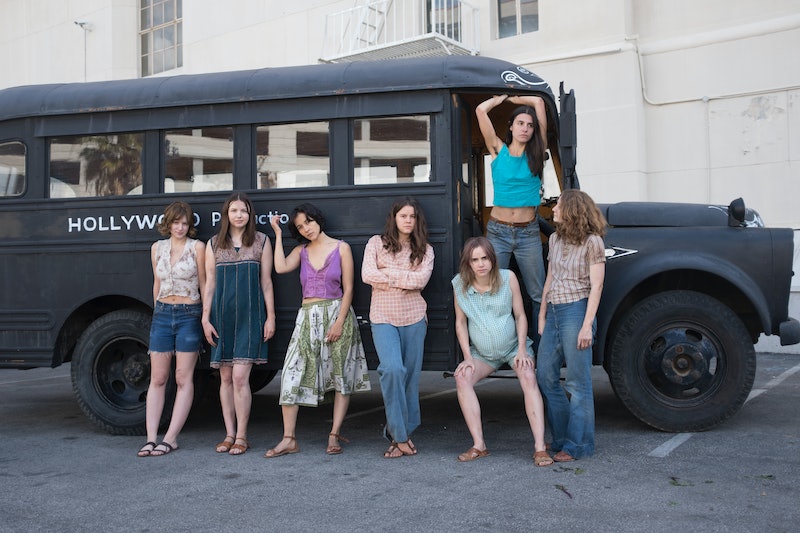 The horrific crimes of Charles Manson and members of the "Manson Family" have been spun into feature films, television dramas, musical numbers, novels, podcasts, and pretty much every other kind of media known to man. So you might assume that any new movie about the cult and their murders might be retreading old territory. But in their film Charlie Says, which comes to theaters May 10, director Mary Harron and screenwriter Guinevere Turner (who also collaborated on American Psycho and The Notorious Bettie Page) put their focus on the women who followed Manson. Though they have absolutely been a source of fascination for decades, the filmmakers found that there wasn't much public interest in what happened to the young women who participated in the Tate-LaBianca murders after they were convicted — or, at least, that any public interest hadn't been satisfied by an exploration of their lives in prison. Sitting down with Bustle the afternoon of the movie's Tribeca Film Festival screening, Turner describes Patricia Krenwinkel, Susan Atkins, and Leslie Van Houten, all convicted of murder, as being "frozen in time" after the trial, even for those who know the Manson story. "You know: acid, orgies, murder, trial, bye! What happened? Nobody cares."

So her method of finding a new perspective on Manson was to fill in that gap. In her research, Turner came upon a book by Karlene Faith, The Long Prison Journey of Leslie van Houten: Life Beyond the Cult. Played by Merrit Wever in the film, Karlene is a student (who later becomes a criminology professor) who is asked by the warden of their California prison to spend some time with Patricia (Sosie Bacon), Susan (Marianne Rendón), and Leslie (Hannah Murray), who are confined together, outside of the general population. The movie shifts back and forth in time, showing how their life on Spahn Ranch and Charlie's (Matt Smith) influence still hang over the women; the "Charlie says" of the title is a refrain often repeated, to Karlene's disbelief and sadness.

The real Faith passed away in 2017, but in the years leading up to the film, Turner reached out to her and worked on gaining her trust.

"Since she’d written this book, it had been about 20 years, and most people approaching her were like, 'Tell me, tell me, tell me,' and she just said, 'No, no, no, no, no. Unless this is something that’s going to get Leslie parole, I’m not interested," Turner describes.

Now 69, the real Van Houten is still imprisoned in California, but is eligible for parole. Krenwinkel won't be eligible again until 2022, when she'll be 75. Atkins died in 2009. A card that appears before the end credits explicitly states that Krenwinkel and Van Houten did not participate in the film, as Turner says it would hurt their chances of being released "if they are perceived by the parole board to have had any association with anything that rehashes, glamorizes, aggrandizes, celebritizes their crime."

Eventually, Faith gave her blessing and Turner was able to speak with her about the work that she did with the women — as the film shows, through teaching them and talking about their lives, she was intent on breaking them out of their delusions and dependence on Manson.

"I think without her, without those classes, without her opening up the outside world to them, they would be happier because they wouldn’t have to face their remorse and their guilt," Harron says. "They could still believe in 'helter skelter' and this fantasy of Charlie. But, in a way, they would have been degenerating more into madness."

"Once she got in there she was doing it because she wanted to, and because she started to really care about them, and she saw that she could actually do this, even though it was a painful thing for them," Turner says, also adding that Faith was "absolutely transformative" in what she achieved.

Considering the violent nature of the 1969 murder spree, it might have been easier for many to write the women off as "these freaky girls" as Harron puts it. In treating them as human beings, both Faith and the movie get to the root of some of the universal weaknesses at work within them. In Harron's estimation, the real challenge for Charlie Says was to humanize the Manson women who actually killed for him, instead of focusing on the ones who didn't.

"I have to say it was very appealing to me to take on the story of the women who were perpetrators," Harron says. "I think that was the most serious thing you could do, was to try to really go through it step-by-step to see how they got there."

For Turner, learning what made the Manson women tick was about "trying to have us see ourselves in that — in shitty relationships, pyramid schemes, or weird scams that we’ve fallen for. We all have it in us to be manipulated." Harron adds, "Very few of us have joined cults, but we’ve all let ourselves be subjugated by someone at some point in our lives."

Highlighting Manson's garden-variety misogyny was an important focus for the filmmakers as well. It's the reason Turner wrote the one scene that she says didn't come from her research, but was instead completely invented, using what she understood about him and other men like him. A family member brings a young woman to visit the ranch and introduces her to Charlie. He makes a remark that offends her, and she says as much. Charlie quickly demands that she get out of his sight.

"It’s sort of demystifying his process, which is to say, at the end of the day, he was a pimp. He knew who was exploitable and who wasn’t," Turner explains. "And [he] immediately flips it to Leslie, like, 'See, I don’t just choose anyone,' but really, [the other woman] just seemed like she wasn’t going to be manageable."

On some level, all women probably know what it's like to have someone try to exert control over them. But Turner has a more intimate knowledge of the type of structure that the Manson women were a part of. Until she was 11, the screenwriter herself grew up in a group called "the Lyman Family," as she wrote about in her recent New Yorker piece, "My Childhood in a Cult." While she didn't choose that situation for herself, Turner recalls missing it after she left. On a return visit, she was even considering staying, until she observed what she called "the rigid gender hierarchy" of the group.

The reason why the film follows Leslie's arrival and indoctrination into the Manson family is because Harron and Turner wanted to show how — "like the frog in the pot", per Turner — these women were drawn in to a way of life that eventually landed them in prison. "I think the popular image of the girls as zombie followers kind of completely neglects the idea that they were drawn in and oppressed in a relationship that’s very like one of domestic abuse or domestic violence," Harron says.

The filmmakers also note that, despite the free love and drug use within the family, the influence of the previous generation still clung to the Manson women. According to Faith, Krenwinkel, Atkins, and Van Houten were just as sweet and accommodating in real life as they are shown to be in the film, making presents for their teacher and flirting with the guard assigned to them.

"[Faith] said they were such good girls, that’s how [Manson] got them to become these criminals, because they were used to being docile and doing what they were told," Turner says. Harron adds, "Which is how their mothers from the '50s were raised."

Turner says says that it's "shocking" to her that, while Manson stayed close to the top of the public consciousness until his death in 2017, the women who did his bidding were so quickly forgotten, "especially because what did happen to them is fascinating." Charlie Says, with its predominantly female team, strives to finally give them their say.

More like this
This First Look At 'The Gold' Shows Jack Lowden In A Whole New Light
By El Hunt and Sam Ramsden
Jennifer Coolidge Hunted For Jewels & Lashes In J.Lo’s Hotel Room
By Jake Viswanath
Owen Thiele Asked Sundance Attendees About Films That Don’t Exist
By Grace Wehniainen
Keke Palmer Shares The Sex Of Her & Darius Jackson's Baby
By Jake Viswanath
Get Even More From Bustle — Sign Up For The Newsletter
From hair trends to relationship advice, our daily newsletter has everything you need to sound like a person who’s on TikTok, even if you aren’t.