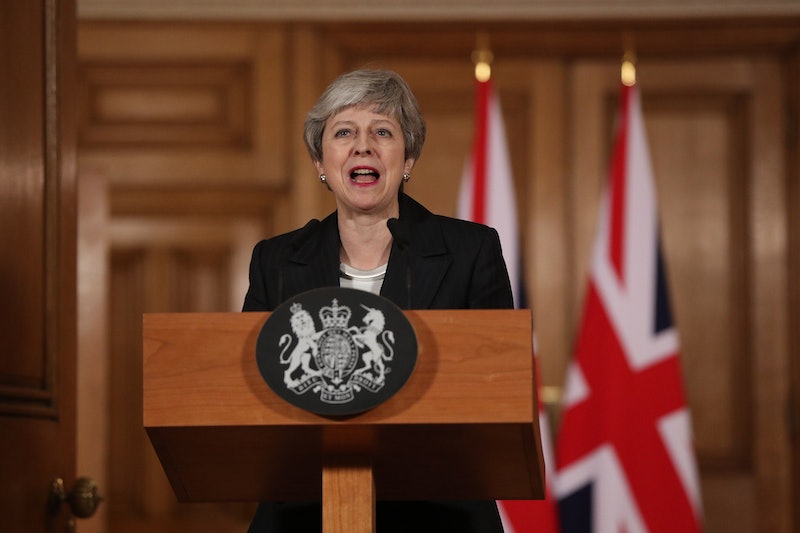 The deadline for Brexit is just under a week away, and you'd think the country would be full of apprehension in regards to what the outcome will inevitably be. But if the fact that a petition to revoke Article 50 crashed Parliament's website this morning is anything to go by (which is nearing a million signatures), I'd take a wild guess and say that Britons are fed up with all things Brexit. While that may be the case, there is still the prospect that negotiations could be extended beyond the deadline date, but what happens if Article 50 isn't extended?

As The Telegraph reports, on Wednesday Theresa May requested for Brexit to be delayed until June 30 in a letter to President of the European Union Council Donald Tusk, as opposed to the original deadline of March 29. Tusk rejected this, stating that a short delay will only be granted if MPs support May's Brexit deal which will be put to the House of Commons for the third time next week, as CNN reports. As per The Telegraph, if MPs don't agree with this deal (again), an emergency summit would be held in Brussels where EU leaders will "offer either a long extension or a no-deal Brexit" before the March 29 deadline.

Even so, the Prime Minister will still be attending an EU summit in Brussels today (March 21) where "she will press her case for a short Brexit extension," according to The Telegraph.

Whatever happens, the brunt of it is that the UK will not leave the EU on time for the original deadline, and May is not prepared to extend the negotiations any further than June 30 as she stated during a statement at Downing Street on last night. But if an extension isn't put into place, it's inevitable that the UK will leave the EU with a no-deal. This means that the country has to immediately acclimatise to being removed from the EU instead of going through a 21-month transitional period, which will lead to all sorts of problems, reports iNews.

If Article 50 isn't extended and the UK ends up with a no-deal scenario, the main areas that will be affected are the trade and immigration systems. The UK will have to revert back to the World Trade Organisation's (WTO) rules on trade, which could result in prices going up in shops "as businesses would have to place tariffs on goods imported from the EU," according to iNews. Some manufacturers may try to bypass this by moving to the EU, which would result in a loss of jobs and infrastructure in the UK. As for immigration, there may be long delays at border control as the government would be free to impose their own controls on immigration of EU nationals, but the EU could do the same to Britons travelling abroad.

But as Bustle UK previously reported, since a country has never left the EU before there's not exactly a "how-to" guide to follow. Until a final (and I mean final) decision is made, there is no way of knowing what will actually happen next.