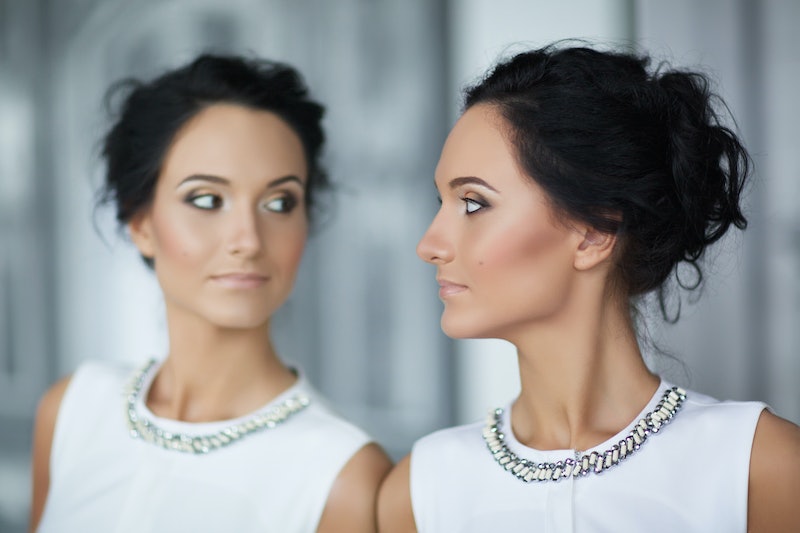 It's often said that everyone has a twin somewhere in the world, and you've probably even posted a pic of you and your celebrity doppelgänger to social media. But what happens if you see your own doppelgänger in real life? While having a meet cute with your doppelgänger might sound like fun, coming face to face with your twin actually has some dark undercurrents. Legend has it that meeting your doppelgänger, which means "double walker" in German, is actually an interaction with your ghostly double, and it could mean something really creepy.

"One theory is that everybody has a body double. Of each, one is good and one is exceptionally evil. Assuming you are the good one, the other one is probably evil, and can be just an apparition trapped in another time or dimension," Halloween Web noted. If you believe the urban legend, coming face to face with your doppelgänger is a bad omen, and it means that both you and your double could be in danger. More common than you seeing your doppelgänger is friends or family running into your twin.

For instance, once, I saw my roommate's ghostly walker at Target, and despite the fact that I knew she was at work and could not possibly be shopping, it looked so much like her that I almost tapped the woman on the shoulder. Was the doppelgänger actually there, was it someone who just looked a lot like her, or was this a vision trying to send me a message? Was the message that she should go to Target, or was it something more serious?

Before you freak out, there is no actual evidence that encountering your "double walker" means your days are numbered. But that doesn't mean it's not fun to entertain the possibilities. In rare cases, coming across your doppelgänger could uncover a family secret that you are actually a twin, like in the movie The Parent Trap. There are tons of stories online about twins separated at birth who had no idea the other existed but somehow found each other later in life.

In other cases, seeing your ghostly double could be a sign of a neurological disorder. The BBC reported that a man saw himself standing at the foot of his bed while he himself was still lying in bed. The man, who had been experiencing seizures before the vision, was so shook that he jumped out a window. He survived the fall and underwent surgery to remove a brain tumor; after that the seizures and hallucinations stopped. This is called the doppelgänger effect where "a person may hallucinate that they are actually seeing and interacting with another 'me' — a visual double."

In folklore, a ghostly walker will have no reflection in the mirror and cast no shadow, the website Crystalinks explained. If this happens to you persistently, you might want to see your doctor to rule out any medical problems like the aforementioned doppelgänger effect.

In famous instances of doppelgänger sightings, people reported seeing their double walker before death. Carl Sandburg's book Abraham Lincoln: The Prairie Years and the War Years reported that Lincoln told his wife that he saw two versions of his face in the mirror, and one was ghastly pale. His wife is said to have believed that this was a sign that Lincoln would be reelected but would not survive. President Lincoln was assassinated 42 days into his second term.

If you believe in time travel, get out your flux capacitor because things are about to get weird with your temporal doppelgänger. "It is an exact likeness of one at a specific time in one's history (or future). Meetings with oneself may occur when one version of oneself travels backwards through the time stream and encounters a younger version of oneself, or when two or more of the same person from different time streams travel to the same moment in their futures," Crystalinks explained.

In reality, speculating about doppelgängers is all in good fun, and if you do come across your double walker, you're likely going to be just fine — but you might want to throw some salt over your shoulder just to be on the safe side. I mean, you never know.

More like this
26 Ghost Story Podcasts To Get You Ready For Halloween
By Jessica Booth, Mia Mercado, JR Thorpe and Emma Carey
14 Scary Campfire Stories To Tell Your Friends
By Charlotte Ahlin and Kaitlyn Wylde
These 25 International Horror Movies On Netflix Prove Fear Is A Universal Language
By Bustle Editors
15 Easy Pranks To Play This Halloween
By Emily Kelley and Lauren Grant
Get Even More From Bustle — Sign Up For The Newsletter