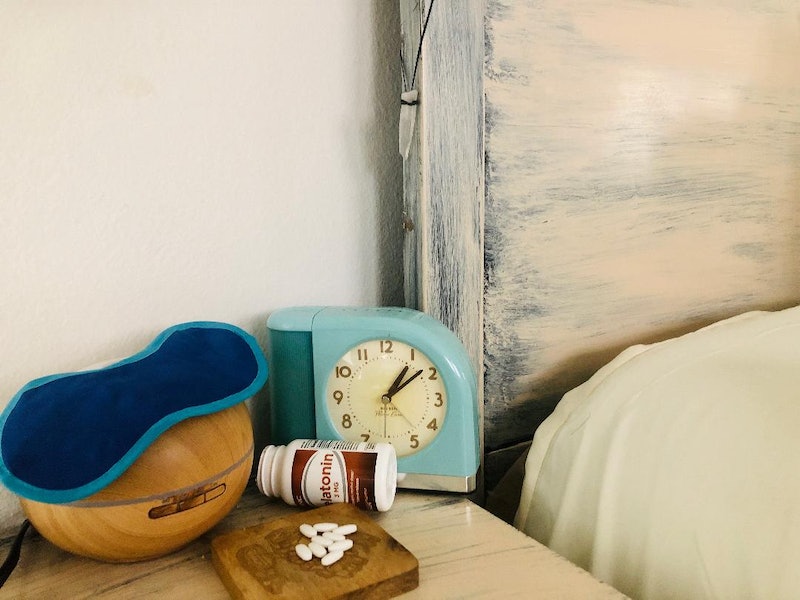 If you have a hard time falling asleep, melatonin might be your bedtime bestie. And if the first dose doesn't help you drift off to dreamland, you may even consider taking another. But before you pop that second (or third) pill, it's important to know what happens if you take too much melatonin. First, some background: Melatonin is a hormone that occurs in your body naturally, and while taking too many melatonin supplements won't kill you, it can give you some pretty gnarly side effects, according to Medical News Today.

"Too much" melatonin is a pretty vague term, for a reason. Because dosages vary between supplement brands, and everybody's natural sensitivity to melatonin is different, the threshold where it becomes too much won't be the same for everybody. "In adults, doses in the 30-mg range may be harmful," Healthline reports. A general starter dose might be around .2 mg to 5 mg, according to Healthline, but pay attention to how you feel after starting to take some.

The most surprising side effect of taking too much melatonin is hyperactivity, which is the exact opposite of what you want when you're trying to get to sleep. Taking too much melatonin can also cause crankiness, headaches, dizziness, gastrointestinal problems, joint pain, anxiety, and excessive sleepiness. If you're new to taking melatonin, Medical News Today recommended starting with the lowest dose to see how it affects you.

The National Capital Poison Control Center explained on its website that because melatonin is a supplement and not a medication, it's not regulated by the FDA. "This can make it hard to interpret research studies that don't describe the formulation of melatonin used. Melatonin seems to be safe when taken for short periods of time, though there are no studies of long-term safety," the NCPCC wrote. What's more, the website reported that people with seizure disorders should not take melatonin at all.

This is why the Mayo Clinic recommended talking it over with your doctor before taking melatonin. "Your body likely produces enough melatonin for its general needs. However, evidence suggests that melatonin promotes sleep and is safe for short-term use. Melatonin can be used to treat delayed sleep phase and circadian rhythm sleep disorders in the blind and provide some insomnia relief. Treat melatonin as you would any sleeping pill and use it under your doctor's supervision."

While you can't become dependent on melatonin like you can on prescription sleep aids, it does have the potential to interact with certain medications, including: anticoagulants and anti-platelet drugs, herbs and supplements; anticonvulsants; blood pressure medication; certain antidepressants; diabetes medication; immunosuppressants; and contraceptives, according to the Mayo Clinic. What's more, it's not recommended for people with autoimmune diseases.

Taking melatonin can also produce vivid dreams and even nightmares in some people. Research suggests that it's not actually the melatonin that causes these dreams but rather, the fact that you're experiencing deeper REM sleep than you're used to. Make sure you know up front what to expect so you're not freaked out the next day.

If you're not used to remembering your dreams, it can be a little unsettling at first. Overall, just because it's sold over the counter in the vitamin aisle doesn't mean it shouldn't be treated like any other medication. Follow the dosage instructions carefully, and evaluate how it makes you feel the next day before adopting it as part of your bedtime routine. #TheMoreYouKnow