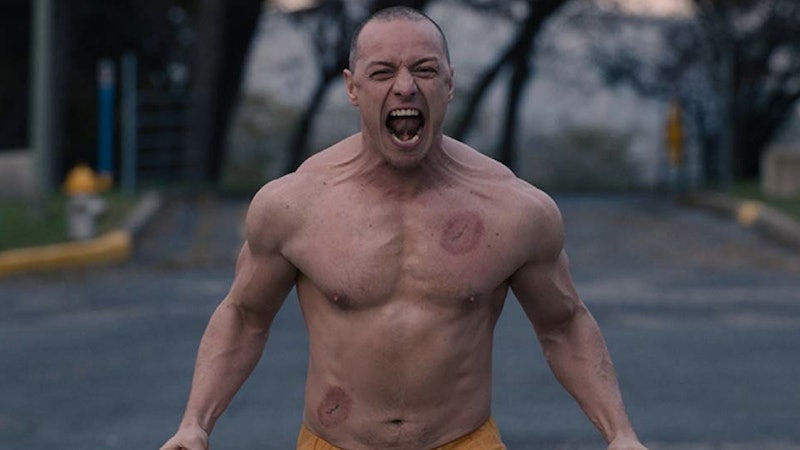 M. Night Shyamalan's latest film Glass has been almost 19 years in the making, starting with 2000 fan-favorite Unbreakable and, in a surprise to most everyone, continuing with 2016's Split, featuring James McAvoy as a man with dissociative identity disorder who houses a disturbing personality known as The Beast. Though the film barely ties into what Shyamalan previously set up in Unbreakable, what happens in Split is key to understanding what he has in store with Glass. Spoilers for Split and Unbreakable ahead!

The two seemingly unrelated films, from two different production companies no less, were with a brief cameo revealed to be part of the same universe. At the very end of Split, diner patrons discuss a series of similar events years ago, unable to recall the nickname given to the perpetrator back then. A quick pan over reveals Bruce Willis' Unbreakable character David Dunn name-dropping Mr. Glass, tying both films together with a neat bow that left fans of Unbreakable shrieking with excitement.

Glass continues the story, possibly satisfying the main complaint fans had with Unbreakable — that the film ended right where it should have started, a fully realized comic-book world with nothing happening between the good guy and the super villain. Though it works on its own as a terrifying film focusing on trauma and survival, the small bit of extra information reframes Split entirely as another creation story, that of impossibly strong and feral villain The Beast.

Keeping in line with Unbreakable's unusual reframing of superhero films, Split's main focus is on Casey (Anya Taylor-Joy), one of three high schoolers kidnapped and held in an unknown subterranean lair by Kevin Wendell Crumb (McAvoy). Kevin is in therapy with Dr. Karen Fletcher (Betty Buckley), who notices Kevin not only undergoes a personality, but a physical change when each of his identified 23 personalities come forward. Speaking to a colleague she notes that "an individual with multiple personalities can change their body chemistry with their thoughts." When asked what will happen when he unlocks the potential of his brain, Dr. Fletcher ominously adds, "There is no limit to what he can become."

Main personality Barry controls who comes forward, and Dr. Fletcher notices that Dennis, who has a bad habit of bothering younger women, and Patricia, an uptight matron, haven't been allowed "in the light" lately. It comes out that, in addition to their negative attributes, both have been worshipping The Beast, a potential 24th personality Dr. Fletcher's never seen. Kevin's therapy is concurrent with his kidnapping of high schoolers Casey, Claire, and Marcia, with sessions revealing information as the girls try and cope with their situation, and Dr. Fletcher slowly piecing together that Kevin might have something to do with the missing girls.

Casey is normally withdrawn — she's suffered longterm sexual abuse at the hands of her uncle, her legal guardian since her father died. But trapped with two girls who (luckily) have no concept of the depths of harm other humans can do, it's Casey who adapts and reaches out to Kevin's various personalities in an attempt to escape. Kevin also suffered abuse at the hands of his mother, and it's possible Dennis was created during a later awkward sexual encounter with teen girls, leading him to kidnap Casey and the others as sacrifice to The Beast. They are two very different responses to the pain and terror of abuse, particularly at the hands of someone responsible for your well-being.

Dr. Fletcher eventually finds Kevin's lair, but is unable to do anything to help the girls but scrawl Kevin's full name on a sheet of paper. (Saying his name out loud is the only way to snap Kevin back into control from other personalities.) Casey comes across this paper as The Beast comes towards her and gets through to Kevin, who's horrified to learn he's not been in control of himself for years. He begs Casey to kill him, but she can't bring herself to do so before The Beast takes back over. Here's an important point to note for Glass: as he chases Casey through the underground warren, she shoots twice at him close-range with a shotgun... to no effect. The Beast is truly super-human, something emphasized when he rips apart the bars of a cage Casey locks herself into.

What ultimately saves her is The Beast noticing signs of abuse on her body. With a goal of ridding the world of the "impure," those untouched by suffering, he sees Casey as pure, and spares her. She's the only survivor, and is left with the disturbing question of well-meaning rescuers of whether she's ready to return home — back to her abuser. Casey appears in the trailer for Glass, though it's unclear what role she'll play.

Split was about her survival and pain, and that may play a larger role in the new film. In a new reveal, Shyamalan himself confirmed a fan theory from Unbreakable regarding Kevin's past. Dunn gets flashes of wrongdoing from people he touches, and bumping into a woman and her young son outside of the stadium where he works, he has a sudden vision of the boy's abuse. Fans have long connected the young man with Kevin, and though he previously denied it, in a recent interview with Total Film, the director said "I actually think that was a remnant of the original Kevin Wendell Crumb and his mum that, by mistake, stayed in the movie. You can see the shadow of the original movie... so in a way it's a beautiful mistake that's an echo of the original story."

That echo is just one of the ways Split resonates with Glass's balancing three characters who are struggling with who, or what, they are in very different ways.

More like this
Everything You Need To Know About ‘Black Panther: Wakanda Forever’
By Bustle Editors
A New Scooby-Doo Movie Confirmed Velma Is Gay & Twitter Is Pumped
By Radhika Menon
The 50 Most Powerful Characters In The Marvel Universe, Ranked
By Johnny Brayson and Nola Pfau
Lin-Manuel Miranda & Tituss Burgess React To 'Little Mermaid' Casting Backlash
By Radhika Menon
Get Even More From Bustle — Sign Up For The Newsletter