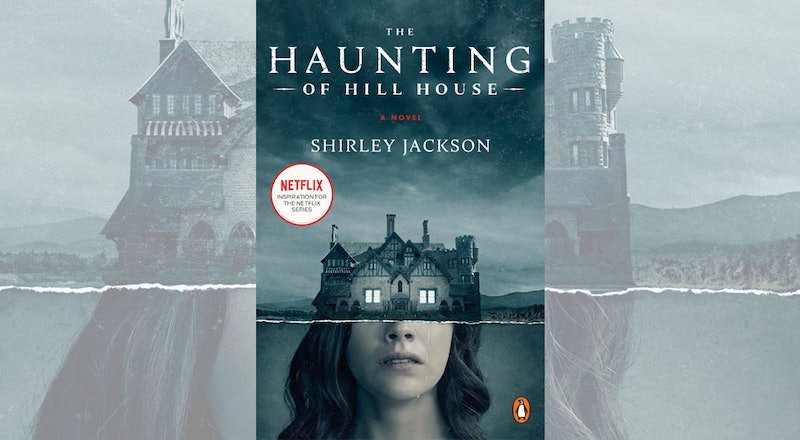 According to a press release from Netflix, the TV series follows "a group of siblings who, as children, grew up in what would go on to become the most famous haunted house in the country. Now adults, and forced back together in the face of tragedy, the family must finally confront the ghosts of their past — some of which still lurk in their minds while others may actually be stalking the shadows of Hill House."

The Haunting of Hill House book follows four strangers, all of whom come to Hill House, long-rumored to be haunted, under the guidance of Dr. Montague, who is hoping to scientifically prove the existence of the supernatural. Over the course of the summer, the house proves itself to be extremely haunted. It's terrifying on a supernatural and psychological level, and it's an absolute must-read for anyone who's obsessed with horror.

For a more detailed summary of the book (and what happens at the end), take a look below — but be prepared for major spoilers.

The Haunting of Hill House by Shirley Jackson, $16, Amazon or Indiebound

The Haunting of Hill House begins as it ends, with a chilling description of the house itself: "...whatever walked there, walked alone." Indeed, over the course of the novel, the house makes it very clear that it would very much prefer to be left alone.

The novel centers on Eleanor Vance, a painfully naive young woman who has spent the last decade of her life caring for her invalid mother and has, as a result, spent very little time in the "real" world. She also happens to possess supernatural abilities. In fact, it's her predisposition to the paranormal that endears her to Dr. John Montague, a doctor of philosophy who asks her to join him for the summer at Hill House as he attempts to scientifically prove the existence of the supernatural.

Eleanor accepts, against the wishes of her sister and brother-in-law. She steals their car, and journeys to hill house alone. There, she joins Dr. Montague, Theodora, another young woman with an affinity for the paranormal, and Luke Sanderson, the heir to Hill House.

When Eleanor arrives, she is immediately struck by its sense of evil. "The house was vile," Jackson writes. "She shivered and thought, the words coming freely into her mind, Hill House is vile, it is diseased; get away from here at once." The home's caretakers, Mr. and Mrs. Dudley, both of whom refuse to stay after dark, also warn Eleanor to reconsider her plans to lodge in the home for the summer. (When she arrives at the gates of the house, Mr. Dudley tells her, "You'll be sorry I ever opened that gate.") Despite her own intuition and warnings from the Dudleys, Eleanor stays.

At first, Eleanor hates the home. She is provided lodging in the "blue" room, which she describes as "chillingly wrong in all its dimensions, so that the walls seemed always in one direction a fraction less than the barest possible tolerable length..." However, her mood changes when she meets adventurous, bohemian Theodora, who sleeps in the "green" room adjoining her own. The two quickly become close.

It soon becomes clear that Hill House is definitely haunted, though the supernatural activity is only vaguely described: there are unexplainable noises, doors slam shut with no explanation, ghosts roam the halls, blood mysteriously appears on Theodora's clothing, and strange writings appear on the walls, including "HELP ELEANOR COME HOME ELEANOR." Eleanor is most sensitive to the hauntings, and even experiences a few that the other do not. As the novel progresses, her mental health deteriorates, though it's not quite clear if it's because of the hauntings of Hill House entirely. Despite her worsening condition, Eleanor exists in a dreamlike state. She doesn't want to leave behind Hill House because she's never been wanted anywhere, has never experienced life fully, and believes this is the happiest she's ever been.

However, the others in the home are not happy about the paranormal events, which are becoming more frequent and more terrifying. Dr. Montague calls in Mrs. Montague and her companion, Arthur, to help investigate. Mrs. Montague demands to sleep in the most haunted room of the house (the nursery, naturally) and decides to use a planchette, a tool for communing with the dead, to try and figure out what is haunting Hill House. She claims that the planchette has informed her that the house is haunted by a woman named Helen, but Dr. Montague dismisses her methods.

In one of the most frightening moments of the book, Eleanor experiences a severe haunting. She hears her mother's voice and exits her room in the night, pounding on the doors of the other guests as she follows the voice to the library. There, she climbs an iron staircase that is on the brink of collapse. Luke follows, climbing the precarious staircase in order to save her. He succeeds, but the guests are shaken and annoyed by Eleanor's actions. The following morning, the guests ask Eleanor to leave Hill House. She argues. She doesn't want to go! This is the happiest she's ever been, she cries! But Dr. Montague is firm: She must leave Hill House at once. Jackson writes: "'Walled up alive.' Eleanor began to laugh again at their stone faces. 'Walled up alive,' she said. 'I want to stay here.'"

Eleanor says goodbye, and gets into the car she's stolen from her sister. As she drives away, she experiences a moment of what she describes as "quick cleverness." She presses hard on the accelerator, and drives the car straight into a tree at the curve of the driveway.

After her death, the guests leave Hill House: Theodora returns home, Luke travels to France, and Dr. Montague publishes a paper on the supernatural that receives an "almost contemptuous reception." The novel ends as it begins: with Hill House — and whatever walks there — alone.