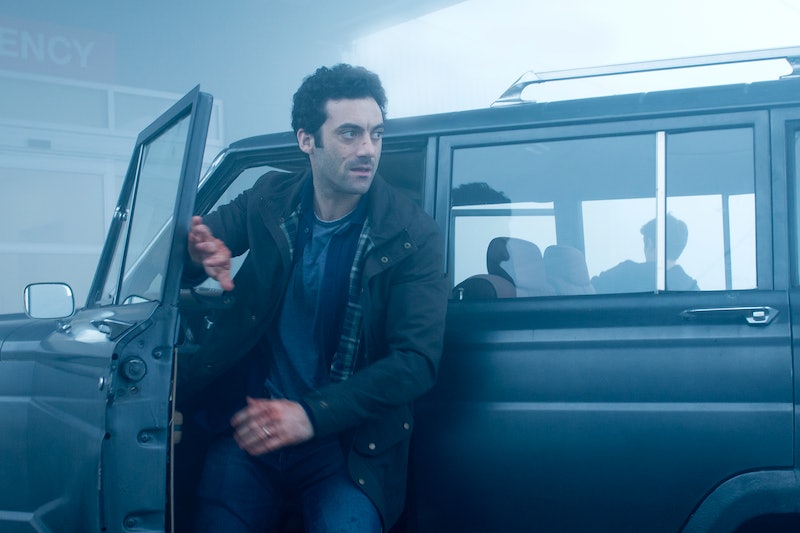 Carrie, The Shining, It, Cujo, and more — Stephen King's books have been adapted over and over again into terrifying movies, television specials, and series. This guy continues to freak out his fans, and they can't seem to ever get enough. King's 1980 novella The Mist was already adapted into a film in 2007, but now, 10 years later, The Mist has reemerged to frighten audiences yet again. The novella has been adapted into a Spike TV series, premiering Thursday, June 22. So, what's The Mist about?

With the premiere of The Mist just around the corner, fans likely don't have time to read King's story before the premiere episode, even though it's not as unwielded as some of his other works, which surpass 1000 pages. So, here's the TL;DR version viewers need before watching The Mist on Spike. (The show will probably deviate from the plot, but spoilers are still ahead.)

The place: Bridgton, Maine. The Monster: "the Mist"/TBD. The Hero: David Drayton. The story begins just after a thunderstorm, when a dense mist rolls into town and reduces visibility to nothing. The novella centers around a group of people who are stuck in the town supermarket due to the mysterious mist. Chief among them is the story's narrator, David Drayton and his son Billy. After the store's generator is tampered with, a man named Norm goes to fix the problem but he does not survive. David and the store manager Ollie Weeks see that Norm was taken into the mist by a creature with tentacles. The others in the supermarket do not believe their story.

A small group from the store led by David's neighbor Brent Norton attempts to leave, but they are, of course, killed. Also, there's a trip to a pharmacy that goes awry. Something is definitely in the mist, y'all. Two soldiers among the supermarket group have been working near the town on something called "The Arrowhead Project." The men commit suicide together and a theory develops that this secret project caused the titular mist.

The chaos has caused society to break down and a radical religious zealot, Mrs. Carmody, has risen to power. Mrs. Carmody believes that a human sacrifice must be made to defeat the mist. She decides that Billy and a young woman named Amanda (who happens to be David's love interest) are to be killed. But Ollie shoots and kills Mrs. Carmody before the sacrifice can take place, thus dismantling her congregation. Ollie isn't the hero for long, a creature from the mist kills him shortly after his courageous act. It seems he is chopped in half by a giant monster that looks like a lobster.

David, Billy, Amanda, and a character named Hilda Reppler escape Bridgton in a car. They drive aimlessly through a mist of monsters — they see massive creatures that resemble spiders and squids and a monster so large they drive under it. The novella ends on a grim note when the car radio picks up a static-riddled broadcast with the word "Hartford." It seems, the mist is spreading.

While this sound scary enough for a horror series, The Mist will likely be pretty different from the novella. To begin with, the characters are different. On IMDB, characters named Eve Copeland and Kevin Copeland have top billing — no Darmodies. And, the televised format of the series will definitely change the way the story is told.

So, even if you have read the book or this synopsis, or seen the film, The Mist on Spike will still likely be a fresh experience.