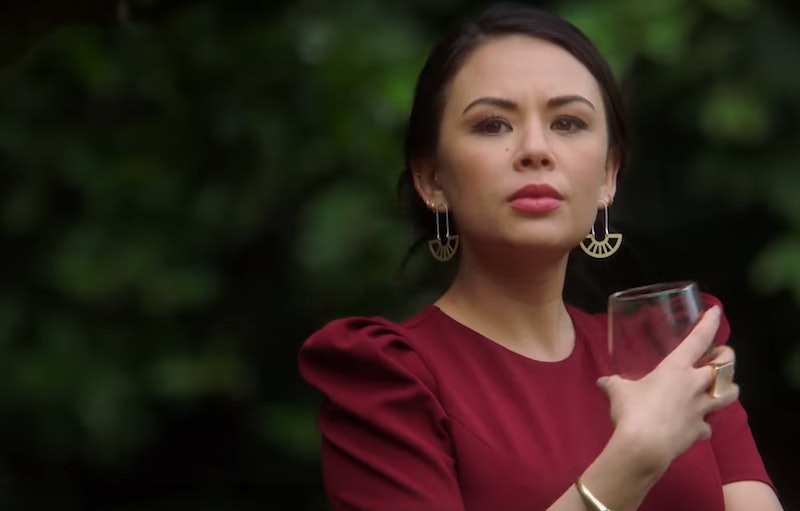 Spoilers ahead for The Perfectionists book. First there was Pretty Little Liars, then came The Lying Game. Now, Freeform is trying their luck turning yet another Sara Shepard YA book series into a thrilling teen drama. PLL: The Perfectionists premieres on Mar. 19, and stars Sasha Pieterse and Janel Parrish as returning PLL characters Alison DiLaurentis and Mona Vanderwaal. However, Alison and Mona never actually appear in Shepard's version of The Perfectionists. In fact, the network wound up making quite a few changes to the original story, so in order to keep you super fans up to date, here's a quick summary of what happens in The Perfectionists book and how it's different from the TV series.

The Perfectionists series actually consists of two books: The Perfectionists, and its sequel, The Good Girls, but as its unlikely that Season 1 will get too far into the second book, this article just covers the first. The official Amazon synopsis for The Perfectionist lays out the story without giving away too much detail. "Ava, Caitlin, Mackenzie, Julie, and Parker are all driven to be perfect—no matter the cost," it reads. The girls are driven together by their shared hatred of the same school bully, Nolan Hotchkiss, "who's done things to hurt each of them."

"They come up with the perfect plan to murder Nolan—jokingly, of course," the synopsis continues. "They'd never actually go through with it. But when Nolan turns up dead in the exact way they'd discussed, the girls suddenly become prime suspects in his murder. Only, they didn't do it."

For the rest of the book, the girls have to figure out who framed them and avoid being murdered themselves. But as any good Pretty Little Liar fan will remember, when it comes to solving and avoiding murder, the devil is in the details. And Freeform actually tweaked quite a few of those details in the new show.

Both the book and the show are set in Beacon Heights, Washington. However, the girls of the book are all students at elite Beacon Heights High School, while the kids on the series are college students at Beacon Heights University. Variety's Latoya Ferguson suggests this change helps the network avoid the uncomfortable problem of showing underage students getting involved with their teachers, since now everyone is at least 18 years old.

Possibly the biggest change from the book to the series is that of the lead characters. While Ava and Caitlin both share a name and general attributes with their original counterparts, Parker and Julie have been replaced entirely with the addition of Alison and Mona. This link to Pretty Little Liars doesn't occur in the books, and was added, Ferguson writes, to rope in the existing PLL fans. In addition, the talented cellist Mackenzie is replaced with the male character, Dylan, instead, who still happens to be a cellist with his sights set on Juilliard.

The central victim of the original story is Nolan Hotchkiss. In the promo for the Freeform series, it looks like Nolan is actually at least pseudo-friends with Dylan, Ava, and Caitlin. However, in the books, per Refinery 29, he was only ever really friends with Parker (one of the characters who didn't make it into the show).

According to the summary from Refinery 29, the twist at the end of The Perfectionists comes when it's revealed that Julie and Parker are actually the same person. Parker was actually dead all along, having been murdered by her abusive father. Julie created Parker as a separate personality in order to cope with her guilt and grief. And it was Julie's version of Parker that committed the murder, which is why Julie had no memory of it whatsoever.

Obviously, the show has yet to reveal who the murderer is going to be, but it seems unlikely that they would have it be two characters (or one) that didn't even make it into the trailer. Fans will just have to wait and see what happens.