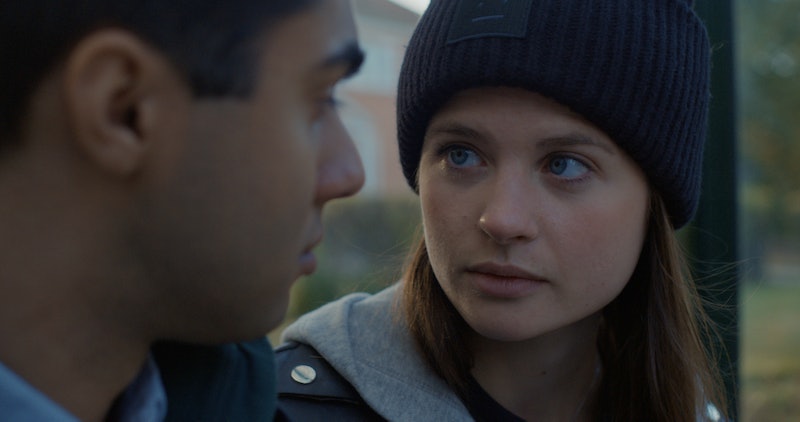 Quicksand is the latest international thriller to hit Netflix's ranks, and it's actually a story you might have already heard of. It's based on an acclaimed Swedish book of the same name by Malin Persson Giolito, and follows a troubling and mysterious act of violence. Now that it's being adapted for the screen, you'll be glad to hear that the Quicksand book's plot is one that'll make for good television.

According to the book's official Amazon description, the story's narrator is 18-year-old Maja Norberg, who's been charged with involvement in a mass shooting at a wealthy Swedish prep school. Her best friend and boyfriend died in the attack — making it even more sinister if she is indeed guilty — and she begins to tell her tale after spending nine months in jail awaiting her trial. "How did Maja — popular, privileged, and a top student — become a cold-blooded killer in the eyes of the public?" the description reads. "What did Maja do? Or is it what she failed to do that brought her here?"

The Washington Post review of Quicksand goes into a bit more detail on how the story is all laid out. Maja and her boyfriend, Sebastian, are accused of killing Sebastian's father before heading to the prep school and killing multiple students and a teacher. "The outburst of violence ends with Maja fatally shooting Sebastian — possibly in self-defense — and left to face justice alone," the review states.

From there, the story hops back and forth between what Maja is facing in the courtroom, and what she remembers of her life and her romance with Sebastian leading up to the attack.

According to Shelf-Awareness.com' review of the novel, Maja's backstory becomes clearer to the reader little by little, even though she appears to be a bit of an unreliable narrator, leaving holes and uncertainty in her own recollection of things. And even though there are some solid breadcrumbs to follow, the mystery of how much Maja was involved in the shooting remains largely up to the reader to decipher until the very end.

"The central question of the novel is, of course, Maja's guilt or innocence," the site reads. "Although the trial itself shapes the narrative, she is reluctant to make a claim about her involvement in the shooting, even in thought. Readers must follow along slowly in dual timelines, trying to determine the shifting truth for themselves."

Throughout the trial and her reminiscing, Maja also manages to touch on things like "Sweden's underlying economic and racial tensions," according to the New York Times. The Times also says that Maja dwells on why the crime happened at all, though the book seems to offer its own opinion on if readers should care.

"One answer the novel offers is that we shouldn’t be so interested either way," the Times' review continues. "People who commit horrific crimes usually have the same more or less banal feelings and motivations as anyone else: They couldn’t meet their needs or control their anger; they were loved too little or indulged too much."

If you're looking for spoilers on whether or not Maja is found guilty, I have some bad news for you. I was hard-pressed to find any outside sources that were willing to divulge that piece of information, so maybe we should all just read the book — only $1.99 on Kindle! Either way, the Netflix series is bound to deliver up some compelling TV, and explore Maja's disturbing story from an entirely new angle.