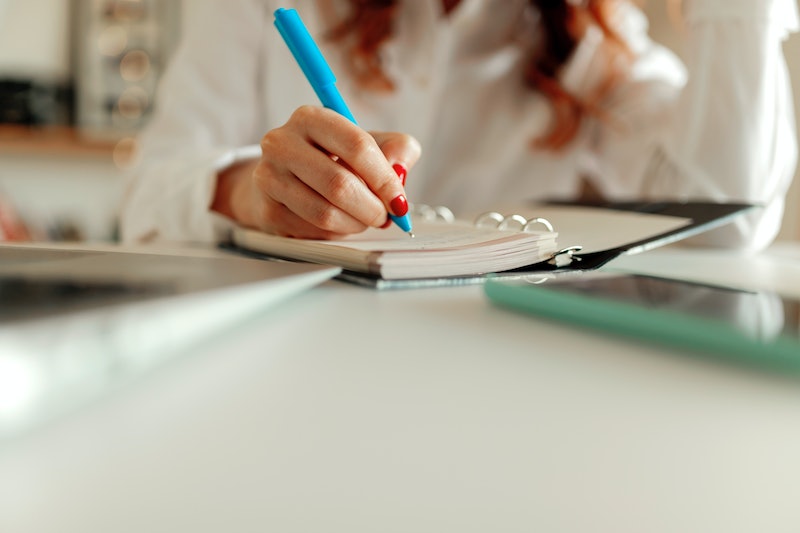 When you've finally completed something that's been on your to-do list for ages — washing your towels, filing your tax return, moving that picture frame a little to the left — you might expect your brain to do a little happy dance and let go of the to-do list item, ready for the next task. But researchers have found that's often not what happens. A research team looked at what happens in your brain when you finish your to-do list, and the results, published in Psychological Bulletin, show that often the brain hangs on to the to-do list item after it's finished — and people can end up getting confused, or accidentally doing the task again. If you've ever washed the same dish twice in five minutes, or tried to remember whether you locked the door or turned off the stove, this process may be why.

"In everyday life, it is not always possible to do everything we want to do at a given moment or at the same time," Dr. Marcus Möschl Ph.D., Chair of General Psychology at Technische Universität Dresden and one of the researchers on the study, tells Bustle. When you have to put your intentions on hold for a while, this is called prospective memory — where you remember what you have to do and perform it when you find the right opportunity. "To our surprise, the studies we reviewed showed that postponed intentions are often, but not always de-activated immediately after their completion," Dr. Möschl says. The intentions remain in your brain affecting your behavior after you've actually done them, and it's not entirely clear why.

According to the studies reviewed, people often experience these after-affects when they're reminded of the task they just did — like seeing keys in your hand after locking the door. Dr. Möschl tells Bustle that when people were given a reminder to do a task — for instance, pressing a certain computer key when they saw a particular word — and then shown the reminder again after they'd done it, they got confused. "People often slowed down, became distracted, and sometimes not only remembered their completed intention but actually performed them again," he says.

The research team believes this is because the brain performs an almost-automatic retrieval of the intention to do the task, and encourages you to do it all over again. It's particularly strong in the short term: even if you've just locked the door, you may see your keys two minutes later, and be driven to check just one more time that it's really locked.

It's not really clear why this happens. Technically, we should clear out these intentions once they're done, to make room for new ones. However, the system definitely isn't foolproof. Many of us have experienced failures in prospective memory, where we intend to do something, get distracted, and end up not doing what we planned. When it comes to intentions hanging around in the brain, it's possible that our brains just don't think we've completed the task, or something else has caught our attention — but Dr. Möschl says there's still a lot to understand.

This sort of malfunction, Dr. Möschl says, can give us insight into how the brain juggles long and short-term goals at the same time, and still remains flexible when situations change. Intentions might even be kept in the brain deliberately to help our productivity. One particular scenario could keep intentions hanging around in the brain after you've finished a task: having a bigger goal in mind. "It might well be that a small intention that is part of a larger goal is only deactivated once the goal itself is reached," Dr. Möschl says. If you have to complete a multi-step process to back up your computer or do a work task, but find yourself going back and worrying over one of the steps constantly, this could be why. Being more intentional about all the steps in the task might help, but it's possible the brain is just making sure we don't miss anything until the entire process is done.

Researchers still don't fully understand why intentions in the brain can stick around after you've ticked them off on your to-do list, and whether it's actually helpful. This may unlock new ideas about how we remember tasks and regulate our behavior, and why we just cannot resist checking we've locked the car one more time.

More like this
The UK Abortion Laws In 2022, Explained
By Sophie McEvoy
6 Abortion Advocates To Follow On TikTok
By Sara Youngblood Gregory
The Best Summer Workout Gear Of 2022
By Carolyn Steber
Plan C Vs. Plan B: What's The Difference?
By Lexi Inks
Get Even More From Bustle — Sign Up For The Newsletter