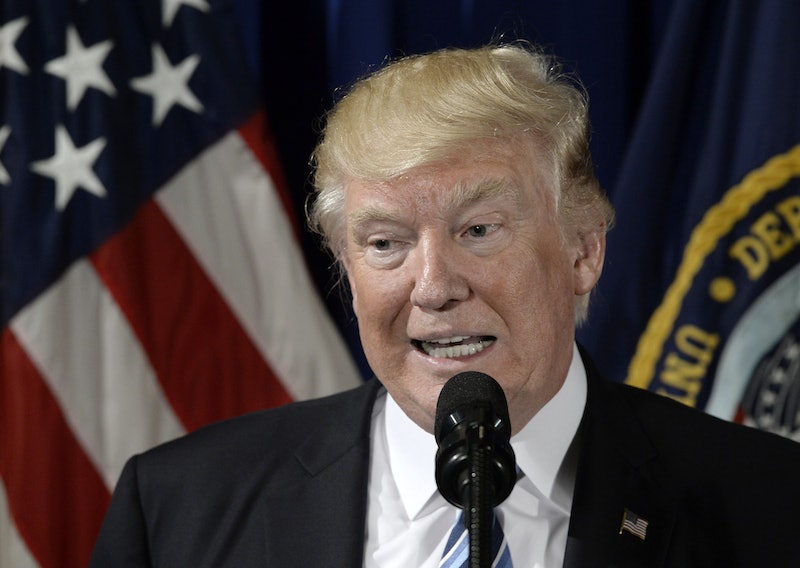 Donald Trump made a lot of promises for what was to come during the first 100 days of his presidency. And yet, it is abundantly clear that a lot of those promises haven't come to fruition. On Saturday, as Trump hits this much anticipated landmark of the presidency, what happens on Trump's 100th day in office?

To be fair, it's a rather arbitrary day, intended to mark the progress of the president's first term. It's sort of like the Groundhog Day of a presidencies: a day that is said to predict the fate of how the rest of the term will fare, but isn't always an accurate or reliable predictor. Although, Trump unnecessarily undercut his own argument on the significance of the 100 days. He at once insisted that the marker is a "ridiculous standard," while simultaneously patted himself on the back for his accomplishments in the first 100 days. He tweeted, "No matter how much I accomplish during the ridiculous standard of the first 100 days, & it has been a lot (including S.C.), media will kill!" In all, Trump seemed to be missing the historical significance of the time frame.

The 100-day mark has been meaningful to scholars, journalists, and politicians, as a way to translate to the public the impact of the work a president has done in the first three months of kicking off his time in the West Wing. Experts mainly focus on legislative accomplishments as a way to take the temperature of the strength of the new administration. The 32nd president, Franklin Delano Roosevelt, is understood to have set the bar, passing 76 bills into law and signing 99 executive orders.

But according to professor of history and public affairs at Princeton University, Julian Zelizer, it's not necessarily the reliable gauge on how things will go. In a piece for The Atlantic, Zelizer wrote:

But the first 100 days in office don’t really tell us much. Some presidents who get off to a strong start, like Jimmy Carter, go on to struggle during the remainder of their terms. Others, like Ronald Reagan and Bill Clinton, have tough early months, but then go on to serve two terms and end their term with strong approval ratings. Some of the biggest presidential achievements, like President Richard Nixon’s trip to China or President Obama’s health-care reform, come long after the 100 days are over.

There have been considerable ups and downs in the Trump administration's first 100 days, and many have been documented in tweets. The ups have included securing a new Supreme Court justice, Neil Gorsuch, and the downs have included accusing his presidential predecessor of wiretapping Trump Tower, an accusation that has, thus far, been completely unfounded.

Even though the 100-day marker is hardly scientific, taking time to pause and reflect on the developments of a presidency — especially one that has included as many scandals, allegations, and headline-making tweets as Trump's — is worthwhile.