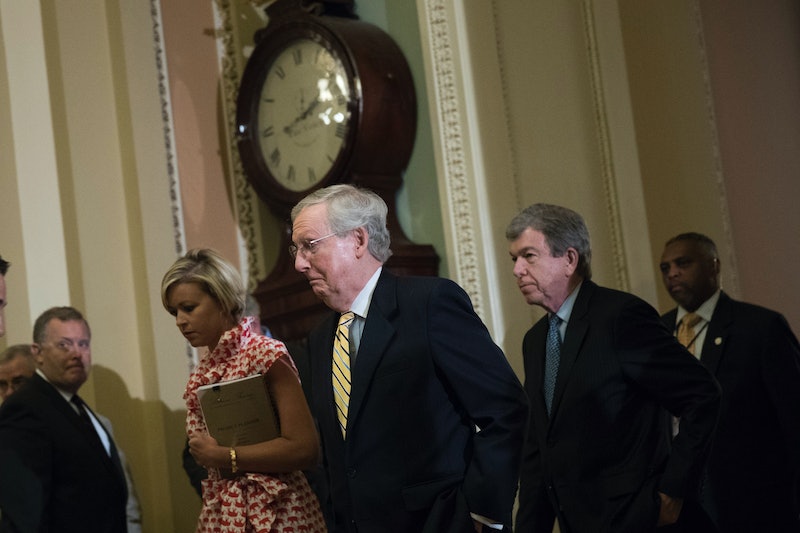 Following the failure of the so-called skinny repeal of Obamacare, there's a looming question for Senate Republicans: What happens to health care now? Now that they've tried pretty much every trick in the book, the Senate might be out of options for fulfilling President Trump's campaign promise of a swift Obamacare repeal and replace.

Senate Republicans had approached health care very secretively, drafting bills behind closed doors without putting them through public hearings or anything that could slow the process down. When the latest of their attempts to push through a repeal and replace bill failed, they turned to the skinny repeal — a bare bones bill, designed really just to allow the process to continue with a discussion in the House. The skinny repeal was only a partial repeal of Obamacare, and it only would have done away with a few of the Republicans' most hated aspects of the ACA. It wasn't particularly popular even among the senators voting for it, with some of them only agreeing to do so with the assurance that the House wouldn't pass it as it was.

In the end, one more Republican senator would have had to vote for the skinny repeal — but he wasn't swayed by Speaker of the House Paul Ryan's promises, so John McCain voted no. That leaves congressional Republicans with basically one option: move on to other things.

Senate Majority Leader Mitch McConnell's statement on the Senate floor indicated that this was the final effort to dismantle President Obama's signature achievement — at least for now. "It is time to move on," Sen. McConnell said, later specifying that the Senate would push forward on voting on nominations. Trump's tweet on the subject also implied that health care would no longer dominate Congress' activities, as he urged those who had voted against the bill to "let Obamacare implode, then deal."

Sen. McConnell also spent a good portion of his speech blaming Democrats for obstructing the process, saying, "It'll be interesting to see what they suggest as the way forward." This is a bold tactic for him to use, as he directed a process in which the bills were drafted completely out of the Democrats' view, without giving them a chance to contribute at all.

"It's time for our friends on the other side to tell us what they have in mind," he said, so perhaps he means the next effort to amend the Affordable Care Act — whenever it comes — could be more bipartisan.

Even after seven years of calls to repeal Obamacare and the election of a Republican president who actually would have signed a repeal bill if it had arrived on his desk, congressional Republicans were unable to fulfill their promises. Their effort will have to rest for now — but the debate over the future of American health care will no doubt continue.