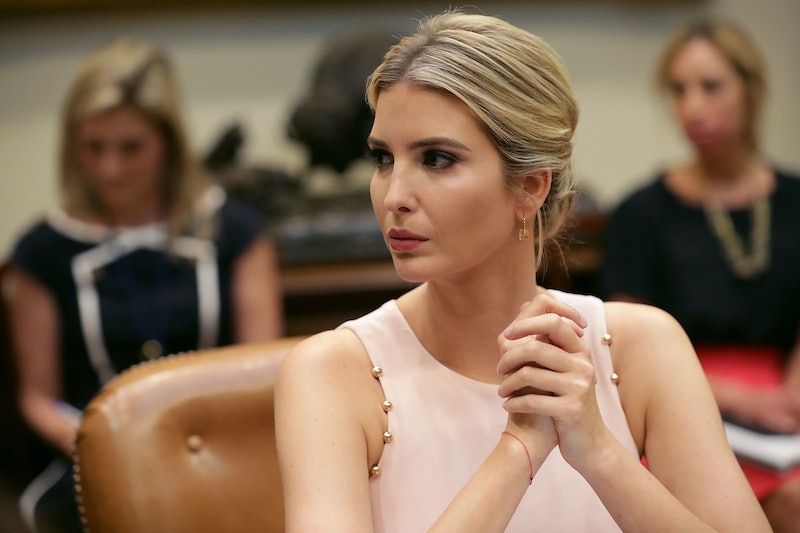 The Trump administration is having one of its wildest weeks on record, and underlying all the news about North Korea and nuclear war was the lingering possibility of impeachment. Rarely has the process seemed more imminent than throughout this national crisis, leaving many to wonder what the White House would look like in the post-Trump era. Should this situation actually arise, whomever takes over would probably start with one important staffing change. Impeaching Donald Trump means Ivanka would likely get fired, because she's an inextricable part of the problem.

If Trump is impeached, Mike Pence will almost certainly be the next president. Unless simultaneous impeachment trials on both Trump and Pence kick them out of office at the same time, the 25th Amendment stipulates that the vice president takes over when the president is ousted. In this specific case, it seems like Ivanka would have to go with her father. The family connections and alleged nepotism have plagued the administration since the beginning, and Pence's best chance at establishing an effective government rests on eradicating any trace of his predecessor.

No matter who becomes president, Ivanka doesn't seem like she'd stand a chance of keep her job. She has little to no foreign policy experience, even though the bulk of her work at the White House so far has been going on foreign trips. Her real influence in the White House is unclear; in an interview earlier this year, she said, "I think most of the impact I have, over time most people will not actually know about."

Despite the scrutiny on her high-level position, no successful policies or deal negotiations have been attributed to her. The next administration will be trying to trim the fat as much as possible, and little that Trump has done during her time in the West Wing has proved that she'd be worth keeping around.

There's also the possibility that Trump herself could be impeached. Article II, Section 4 of the Constitution states that "the President, Vice President and all civil Officers of the United States, shall be removed from Office on Impeachment for, and Conviction of, Treason, Bribery, or other high Crimes and Misdemeanors." This may be a question for constitutional experts, but someone who works in the White House could be eligible. However deep this hypothetical cause for impeachment against her father goes, Trump could find herself charged and removed from office as well.

Trump and her dad don't seem to be going anywhere in the short term, what with everyone distracted by the possibility of nuclear annihilation and all. But in the event that impeachment does happen, Trump might want to start looking for a new job.