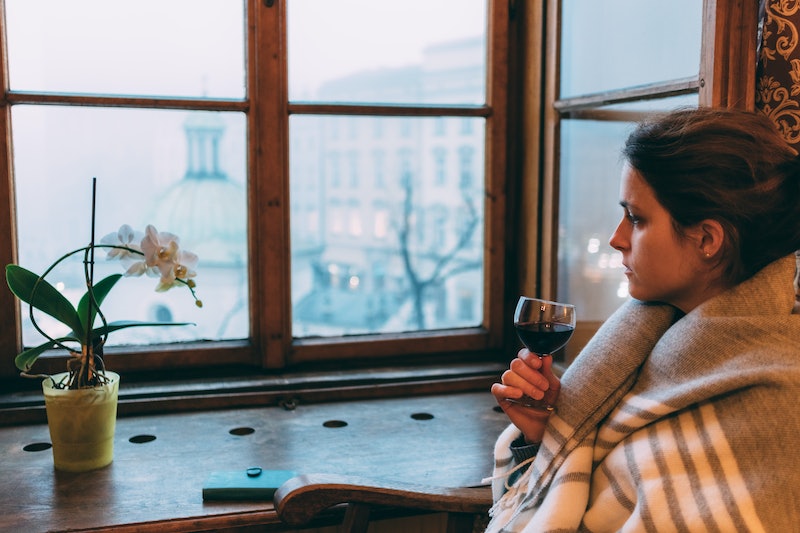 The first buzz of a cocktail on a night out, followed by a surprise burst of extroversion in a karaoke bar, then a blurry few hours and a headache in the morning: it's clear that alcohol has many different effects on the brain over the course of just one night. Alcohol and the brain have a complex relationship, experts tell Bustle, with even the occasional small drink creating noticeable neurological changes.

"Alcohol has two major effects on the brain," Dr. Joseph Volpicelli M.D. Ph.D., head of the Volpicelli Center for treatment of addiction, tells Bustle. "The first is to depress activity of the nervous system and the second is to increase feelings of pleasure." Over the longer term, depending on how much someone drinks, alcohol can also change the brain's shape and structure, affect memory and concentration, and affect things that might not seem related to drinking at all.

"Drinking causes an increase in the release of endorphins, which in turn increases dopamine in the reward centers of the brain," Dr. Volpicelli tells Bustle. Endorphins are neurotransmitters that heighten pain tolerance and increase mood. "The increased dopamine produces feelings of euphoria (the alcohol high) and increased energy." This is where the initial buzz of a night out comes from, and it's also why we keep drinking once we start: the brain wants the endorphin hit to continue.

Drinking also ramps down activity in other parts of your brain. "Alcohol is a sedative," Dr. Volpicelli says; it lowers your brain's activity level through altering your neurotransmitters.

Even one drink is enough to notice these effects. "Having a drink initially causes a depressive effect on the brain, which in most people reduces their social inhibitions and slows their physical reactions," Dr. Keith Heinzerling M.D., an addiction medicine specialist at Providence Saint John's Health Center, tells Bustle. Hence why you can become the most confident person alive after one cocktail. After several drinks, though, the areas control rational thinking and reflexes slow down too, as does your brain's reaction time.

"Multiple studies have shown a correlation between prolonged alcohol use and cognitive complaints," Dr. Clifford Segil M.D., a neurologist at Providence Saint John's Health Center, tells Bustle. Alcohol isn't good for memory at all. 2019 research published in Nature found that heavy drinkers showed changes in the memory centers of their brains over time. Alcohol can physically change the way the brain forms memories, and in people with alcohol use disorder, that can make cravings more powerful.

Chronic Alcohol Use Can Age Your Brain Cells

Heavy drinking can make your brain look older than it really is. A 2020 study published in Scientific Reports and found that daily drinking over the course of many years was associated with an older-looking brain. People who drank daily for years had smaller brains overall than people who drank less or not at all, making their brains look smaller and older. "For people who have been drinking for years, alcohol has a toxic effect on the brain and destroys the myelin sheath that covers and protects nerves," Dr. Volpicelli says.

The Brain Can Learn To Crave Alcohol

Science shows that when people crave alcohol, one particular part of the brain is responsible. "Like all addictive drugs, alcohol has effects on the brain’s reward system," Dr. Heinzerling says. In 2019, researchers were able to 'switch off' the part of the brain that causes alcohol cravings, a small group of neurons in the brain. When the neurons were activated, rats showed that they were craving alcohol; when they were turned off, the cravings stopped.

More like this
Got Brain Fog? Here Are The Best Supplements For Memory & Cognition
By Carolyn Steber
The Spiritual Meaning Of Angel Number 000, Explained
By Kristine Fellizar
Think Your Partner Is Cheating? These Tarot Cards May Confirm Your Suspicions
By Kristine Fellizar
Your October 2022 Monthly Tarot Reading
By Jezmina Von Thiele
Get Even More From Bustle — Sign Up For The Newsletter