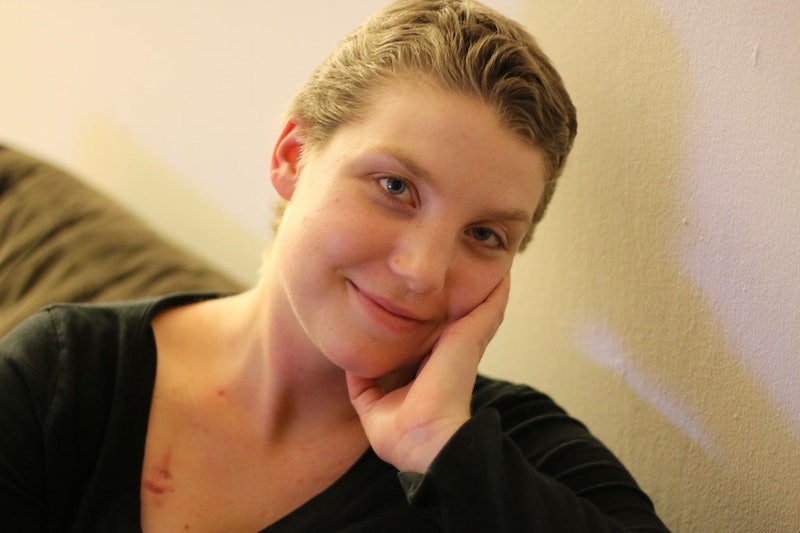 On a sunny autumn morning in Los Angeles, Briana Nettie woke up with her third sinus infection of the month. “Don’t you think it’s funny that all these things keep happening to you? That you keep having to go back to the doctor?” her roommate asked as Nettie headed to U.C.L.A.’s medical center for her fifth doctor’s appointment of the semester.

Nettie, 21, a senior majoring in Spanish and linguistics, wearing a gray university hoodie, jeans, and Nikes, dangled her legs over the exam table as a nurse ran a hand along her neck and stomach, pausing at a fist-sized lump above her shoulder.

“You need to get an x-ray right now,” the nurse told her.

The nurse directed her to a mirror, pushed Nettie’s dark blonde hair aside and pointed to a spot near her collar. “You don’t see the lump right there?” she said. “You probably have cancer. You need to stay and do these x-rays.”

“I walked out and I just started crying,” Nettie, now 22, recalls. “I had a very strong correlation that cancer meant death.” A month later, over Christmas break, Nettie received the call officially diagnosing her with Hodgkin’s lymphoma, a cancer affecting her immune system.

Nearly 70,000 adolescents and young adults (ages 15 to 39) are diagnosed with cancer each year, according to the National Cancer Institute. It is the leading disease-related cause of death for the age group, claiming nearly 9,000 lives annually and representing 10 percent of all adolescent and young adult deaths, behind only homicide, suicide, and accidents. Among those 15 to 24, leukemia, thyroid cancer, and lymphoma are the most common, with Hodgekin’s lymphoma the most frequent among college-age patients, according to Gary Kupfer, a pediatric oncology specialist at Yale University.

Though the institute reports that cancer rates for 15 to 39-year-olds have declined approximately 2.4 percent over the past decade, organizations like The Samfund, a nonprofit providing nearly $250,000 in financial support to young adults with cancer each year, see the statistic as still too high.

“People are graduating from school with tens of thousands of dollars in debt, very limited job prospects and the economy is in a tough spot,” Samfund C.E.O. Samantha Watson, who diagnosed with bone cancer at 21 and leukemia at 23, says. “There are so many hard things about being a young adult anyway — then throw in $100,000 for cancer.”

By February, two months after she was diagnosed, treatment was taking a noticeable toll on Nettie’s body and bank account. She had quit her minimum-wage paying job at Trader Joe’s, her only source of income, and relied on savings to pay her rent and financial aid to cover her tuition.

That left her drastically short of cash. In January, Nettie launched a crowdsourcing effort through GoFundMe called Briana’s Cancer Fund, asking for $5,000 in donations to make up for the several thousand dollars in medical expenses her insurance didn’t cover. The page also sought assistance in buying wigs, hats, and scarves as well as irritation-free beauty products like eyebrow pencils, false lashes, and unscented lotion. “I was my only source of income and then I just couldn’t work,” she says. “I just didn’t have any other option. Nobody’s going to mail me a check for rent.”

In a few weeks, the page garnered 800 Facebook shares from friends and strangers and more than $6,000 in donations, pushing Nettie past her goal. She also received gifts by mail and in-person, including a $200 wig from a boutique owner whose daughter saw Nettie’s story on Facebook. “Random people donated $500,” she said. “I felt so relieved, like I was actually going to be taken care of. It brought me to tears.”

With her financial expenses somewhat under control, Nettie worried about school. The exhausting therapy led to her nodding off in class. A side-effect of her chemotherapy, short-term forgetfulness, often caused Nettie to blank on a full night’s studying before a test. The day-long trips to chemotherapy also took out a huge chunk of her time, forcing her to squeeze in big assignments as an IV line dripped chemicals into her arm.

“Part of cancer is being able to be a normal college student — making class, not having to go home for a semester or lose a whole semester’s worth of credit because you’re sick from chemo,” Mel Rogers, an organizer for Colleges Against Cancer, tells Bustle. “The number one struggle I’ve seen is students trying to maintain their academic status and keep on the graduation track.”

With her closest family member, her grandmother, over 300 miles away, Nettie leaned heavily on her roommates for support. “She never used her cancer as an excuse because she loved school that much,” says Nettie’s roommate Jordan Dakin, who met Nettie only three months prior to her diagnosis. “Her cancer absolutely brought us closer. She jokingly refers to me as mom now.”

Dakin wrote scholarship essays and emailed professors on Nettie’s behalf, sometimes without her knowing. “She maintained a full workload, got straight A’s, got into a master’s program,” Dakin says. “It really actually was an incredible year for her, personally and scholastically.”

“When I wore my wig, I would get significantly more swipes ... One guy told me, ‘It’s not that you have cancer. I’m just really scared of bald chicks.’"

On a winter morning, straightening her hair in her bathroom, Nettie noticed a chunk of hair falling into the sink and made an impromptu decision to shave her head. “When my doctor diagnosed me, I talked to my grandma right after and I was like, ‘I don’t want to be bald! I’m going to miss my hair!’” Nettie says. “I always had long hair my whole life.”

Now, sitting on a stool in her living room as Britney Spears hits boomed over the buzz of a friend’s electric razor, Nettie watched strands of hair pile around her. “It was kind of liberating,” Nettie said. “After it was done, I took some selfies, swept it up, and threw it away.”

When Nettie’s roommates even encouraged her to get back into dating, about four chemotherapy sessions into her treatment, she reluctantly created profiles on apps like Tinder and Bumble, posting photos of herself both in her luxe ombre wig and completely bald. “When I wore my wig, I would get significantly more swipes,” she says. “One guy told me, ‘It’s not that you have cancer. I’m just really scared of bald chicks.’ It definitely shot my confidence down more than it already was.”

In July, after graduation, Nettie reached another milestone: finishing her last chemotherapy session and celebrating with an all-night karaoke session. The following month, a week after her 22nd birthday, she received another gift — a phone call telling her she was officially cancer-free.

“I wish myself now could tell myself in the past that really everything would be OK,” Nettie, who is now three months into her remission and pursuing a master’s in linguistics at U.C.L.A., says.

On Thanksgiving morning, almost exactly a year after her diagnosis, Nettie leans back in a leather recliner in her grandmother’s living room in northern California. Her grandmother, in a chair across from her, is working on a crossword puzzle, with one eye on Everybody Loves Raymond. With her laptop and her brown and white chihuahua on her lap, Nettie types a Facebook status about what she’s thankful for: friends, family, good health.

Then she heads to the bathroom, slips on a cream 70s’-style floral dress and applies her makeup, glossing her lips, brushing her eyelids with brown shadow. Her eyebrows have fully grown in.

Looking at the tuft of dark blonde hair on her head, she pauses for a second, debating whether to put on her wig. She slips it on, adjusts the bangs in the mirror, and heads out the door. Nobody talks about her disease at Thanksgiving dinner. For the first time in a while, Nettie, wearing someone else’s hair, feels like herself.