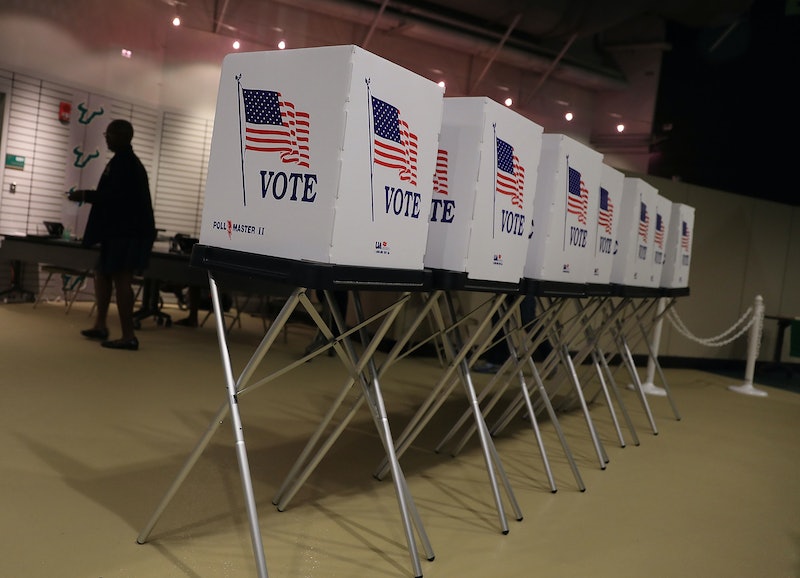 The midterm elections are just around the corner, and they have the potential to fundamentally transform the rest of Donald Trump's presidency. But many states have enacted voting restrictions, and some of them are quite complex. If you're wondering what ID you need to vote on Tuesday, the answer will depend on where you live.

The Supreme Court's gutting of the Voting Rights Act in 2013 gave states — specifically, southern states with histories of voter suppression — significantly more leeway in crafting their own voting laws than they'd previously had. Many of those states immediately got to work passing new restrictions on voting, and a lot of those restrictions concerned what kind of identification voters are required to present before casting their ballots.

Thankfully, several organizations have created centralized databases for this information. Select your state at the U.S. Vote Foundation's website, for instance, and you'll be presented with all the information you need about polling access, including what kind of identification you need to cast a ballot. The National Conference of State Legislatures (NCSL), meanwhile, has a visual guide to voter ID requirements by state.

According to the NCSL, seven states are "Strict Photo ID" states; this means that would-be voters in the state who don't have government-issued photo identification on them when they arrive at the polls won't be able to cast a regular ballot. Instead, they'll have to fill out a provisional ballot and take some form of additional action afterwards, such as sending a copy of their photo ID to a state agency, in order for their provisional ballot to count.

Those states are Georgia, Mississippi, Virginia, Tennessee, Kansas, Indiana and Wisconsin, so if you live in any of them, make sure you have an accepted form of photo ID on you when you leave for the polls on Tuesday. (Pennsylvania and North Dakota have also enacted strict photo ID laws; however, those laws have been struck down by courts and won't be in effect for the 2018 election.)

Meanwhile, three states fall into the "Strict Non-Photo ID" category; this means that voters without an ID will have to cast a provisional ballot and take further action afterwards in order for their votes to be counted; however, the ID doesn't have to have their photo on it. Ohio, North Dakota and Arizona are all in this category, so residents of those states should also take an accepted form of ID with them while heading out to vote.

It's worth stressing, however, that each state has it's own voting laws, and many of them are different from each other in crucial ways despite seeming superficially similar. In Mississippi, for instance, voters without a photo ID who cast a provisional ballot have five days to show their ID to state officials if they want their provisional ballot to be counted. But in Georgia, such voters only have three days, while Tennesseans only have two.

Although nobody will know for certain until the ballots are counted, Tuesday is expected to be a good day for Democrats. According to FiveThirtyEight, Democrats have a six in seven chance of winning control of the House of Representatives, an outcome that would severely imperil Trump's ability to pass any legislation in the second half of his term. However, FiveThirtyEight also gives Republicans a five in six chance of retaining control of the Senate, so a divided Congress is a strong possibility in 2019 and beyond.