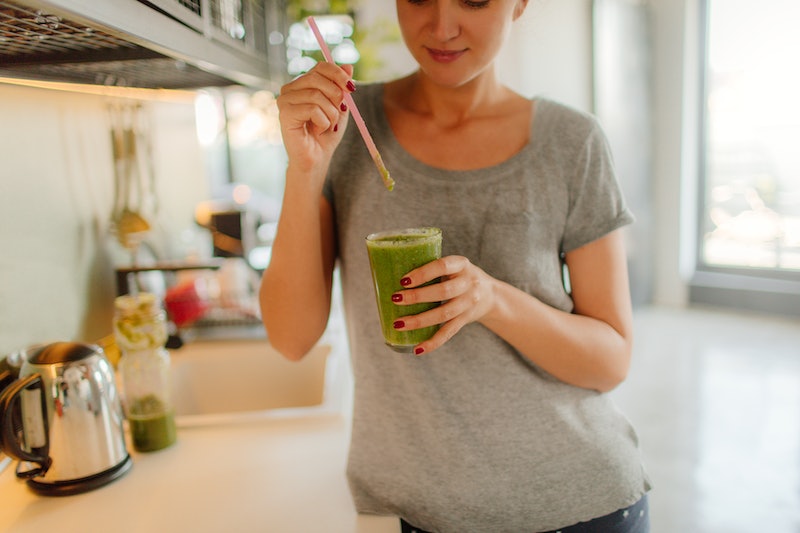 It's positioned as the anti-diet: Abandon all inhibition, guilt, or shame around food and eat like a baby, or in tune with your body's natural rhythms. Intuitive eating sounds pretty simple — but for many, it means radically reframing their entire relationship with food. And for people used to living under a toxic diet culture, the practice may be a lot harder than it seems.

“The process is about reconnecting with our intuition and learning to trust our body again,” says registered dietician-nutritionist Laura Silver.

But, as Claire Mysko, CEO of the National Eating Disorders Association (NEDA), puts it, “It's tough to ... really understand what it means to trust your appetite when all you've known is this cycle of restriction.”

Many people are raised in this cycle of dieting, some starting from a very young age. While proponents of the idea remind people that they were technically born with the ability to discern what their body needs, getting back to that point is easier said than done.

Understanding that intuitive eating isn’t just another diet can be difficult for people who are always on some kind of food plan. The term was coined by nutritionists Evelyn Tribole and Elyse Resch about 25 years ago. The practice is becoming more widely recommended as body positivity and neutrality have become key social issues over the past few years. Unlike restrictive diets, which can lead to anxiety and obsessive behaviors, intuitive eating centers on honoring what the body needs or wants, and making peace with fueling and satisfying it. “The way I bring that up oftentimes with clients is, ‘Think about when you were an infant,’” Silver says, “Newborn babies cry when they're hungry, they eat when they're hungry, and they stop when they're full. As soon as they've had enough, they immediately start turning away.”

Somewhere along the line, Silver says, people tend to lose that sense, especially under the sway of diets that indirectly encourage cravings or even binging. Her practice focuses heavily on addressing the challenges of trusting your body, like managing anxiety associated with meals and learning how to recognize hunger and fullness. She acknowledges that most people have developed certain judgments about foods being “good” or “bad” by the time they’re adults.

There’s no clear-cut path to becoming a more mindful eater.

Further, dieting is a social construct in more ways than one. “It's something that I think a lot of women bond over,” Silver says, “And so we just learn from an unfortunately young age that that's how we're supposed to live our lives.”

While dieting in itself does not necessarily constitute a disorder, stressful or strict diets can lead to disordered eating, or behaviors like prolonged fasting that prevent people from getting the nutrients they need. Both dieting and disordered eating can be precursors to eating disorders.

“When people start to feel that their thoughts and behaviors around food are starting to dominate their lives in a negative way,” Mysko says, “that's where I think that the reframing of what ‘health’ actually means is very important. You have to learn how to incorporate food in a way that doesn't fit into black and white categories of good or bad.”

Silver says that relationships with food can fall onto a spectrum; some are able to shake old habits more easily than others. But she stresses that facing challenges when it comes to reframing how we look at our meals is common, and that “everyone and anyone” can benefit from it. “We don't want to pretend like this is easy for everybody and that if they can't figure it out, that means there's something inherently wrong with them,” Silver says.

For people with eating disorders, working on trust and mindfulness when it comes to food doesn’t need to happen until further down the line in their recovery, Silver says. Because intuitive eating hinges around learning to recognize and trust physical cues from the body, Silver stresses that it may not work for people who aren’t in a place where they can identify those cues. “You can't really dive into intuitive eating for someone with anorexia or bulimia or binge eating,” Silver says, “because these are people who really have lost connection with their hunger and fullness in that their body's not giving them those cues.”

Mysko says that trying to get back into a more mindful routine before long-term dieting becomes a disorder is key. “We can start talking about this and educating people to embrace this when we talk about food and weight and nutrition,” she says, “particularly for younger people, before they get caught up in the cycle.”

Silver pushes her clients to remember that their relationships with fueling their bodies will ebb and flow. There’s no clear-cut path to becoming a more mindful eater. “People can end up taking intuitive eating and making it into a new sort of diet,” she says. “That's just not what this is. There's no doing it right or wrong and everyone's just got to go at their own pace. It's something we have to do kind of forever.”