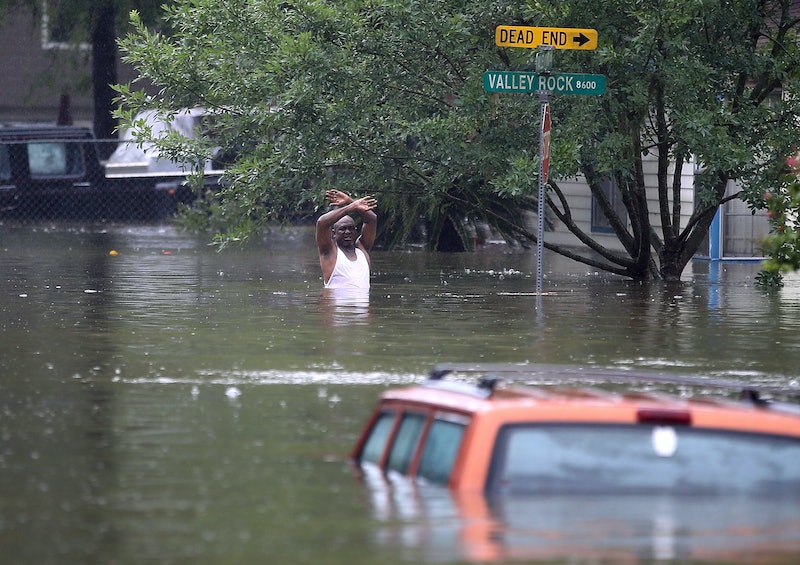 The aftermath of Hurricane Harvey has brought intense flooding to Houston and surrounding areas, leading both President Trump and Texas Sen. Ted Cruz to describe what is happening in the region as a "500-year flood." However, Trump mistakenly referred to it as a "once in 500 year flood" on Twitter, even though experts actually use the phrase to discuss probability, not history.

According to The New York Times, a 500-year flood — or any event, for that matter — is one that has a one in 500 chance of taking place in a given year. Vox reported that experts might even classify the flooding caused by Harvey as a 1,000-year flood, which would mean there was a one in 1,000 chance of such a flood taking place this year.

This distinction is crucial. Sandra Knight, a former official at the Federal Emergency Management Agency, told the Times that failing to make this distinction may lull people into a false sense of security. “People think: ‘Well, it’s a one-in-100-year flood. We had one last year, so it won’t happen again,’” Dr. Knight said. But in reality, “they can happen back to back.”

In the case of Texas, this distinction has tangible consequences. In fact, parts of Houston were exposed to 500-year flooding twice last year, and the National Center for Atmospheric Research's Kevin Trenberth told the Times that climate change has turned "what used to be a 500-year event" in the region into "a 50- or 100-year event.”

Mother Jones' analysis of illustrations from the Fourth National Climate Assessment confirms this probability increase for events like Harvey. By 2030, according to Mother Jones, what was once a five-year event in the Houston area will become a two-month event. Considering these numbers, that means that the probability of an event like Harvey could significantly increase to a one in 30 or even one in 20 chance of occurrence.

As Vox pointed out, public policy is largely designed to target 100-year events, but not 500-year events. As a result, despite the fact that Harvey's aftermath signifies the third 500-year flood in three years, most city and regional policies are designed to provide for people who live in 100-year floodplains.

Moreover, Houston is not alone in experiencing these devastating events. Cedar Rapids, Iowa faced a 500-year flood in 2008 and a 100-year flood just last year. And although Hurricane Harvey and its aftermath have not yet been officially classified as a 500-year event, climate change makes it far more likely that we will see a similar — or worse — event before 2517.