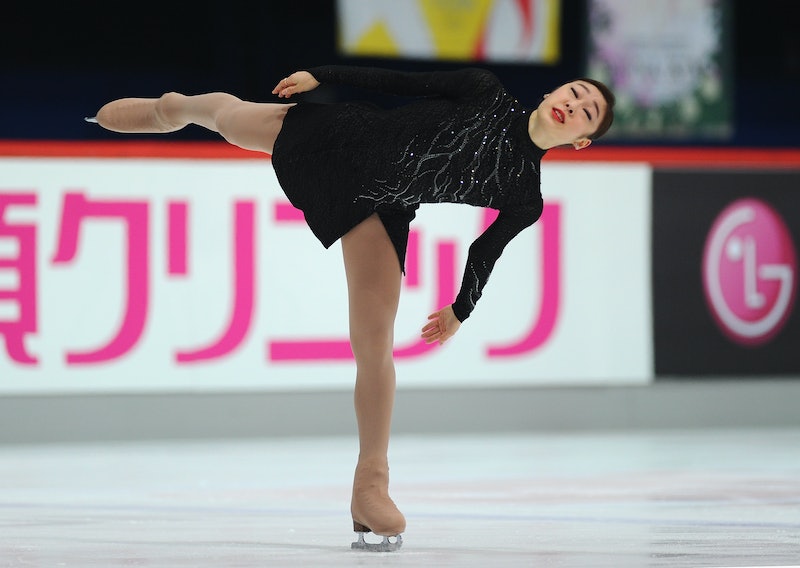 Based on its name, you would think that the "camel" technique in figure skating was inspired by an elegant, gravity-defying camel somewhere twirling in the desert. But this particular spin is most popular given its use in the physically-demanding world of skating. The camel spin, it turns out, has a rich history, different schools of thought when it comes to its name, and nine intense variations.

Technique-wise, the camel spin is probably one of the most famous and well-recognized spins in figure skating history. You've probably seen it, too. In this particular style, the skater raises his or her free leg above hip level, parallel to the ice, while holding their free arm above their hip as they begin to spin.

Historically, there are — as mentioned before — two different ideas about how the name came to be. One school of thought says that the camel spin was first performed by the British skater Cecilia Colledge in 1932. Back then, the spin was highly gendered and viewed as a technique used by women given their physical flexibility. Now, both men and women learn to do it.

The other school of thought, often attributed to the late figure skating coach Gustave Lussi, said that the name originated after an Australian skater Campbell performed the spin. "Campbell" sounds close to "camel" and thus, the name became camel spin. But the disputes continue, so there's no definitive say on who gave the move its very name.

Camel spins can be done by single athletes as well as pairs. In fact, sometimes the spin is done by a group of skaters — usually four or six — in synchronized fashion, creating an incredible vision for the audience.

When it comes to its types, the camel spin has nine different faces. For instance, one of the spins is known as the "flying camel" which starts with a jump by the athlete and then begins a camel spin. Then there's the "layover spin" in which the athlete spins in such a way that their torso is facing upward, not toward the ground. It seems to be one of the more dramatic variations of the camel spin in which the skater almost appears as if they are suspended mid-air.

In addition to these variations, there's the "catch-foot camel spin." Here the skater's physical flexibility plays a fundamental role in their making (or possibly breaking) the perfect camel spin. In this type, the skater holds their free leg in the air over their back with the help of their free hands.

Apart from those types, there's the doughnut spin. Holding the free leg's foot and bringing it almost to their head, the skater takes on the appearance of — you guessed it — a doughnut. There's also the Grafström spin in which the skater does bent-knee skating with a camel spin. For the Hamill camel, the skater drops their free leg and torso down and begins spinning. It's one of the common variations of the camel.

Illusion is another variation in which the skater attempts to create a stunning spectacle by rhythmically moving up and down at a rapid speed in a camel spin.

The final variation is the forward camel in which requires immense control over one's body and even more command over their speed. In this variation, the skater commences with a camel spin and then takes it to a forward edge while spinning in concentrated circles until they quickly revert to the normal camel spin. Talk about dizzy.