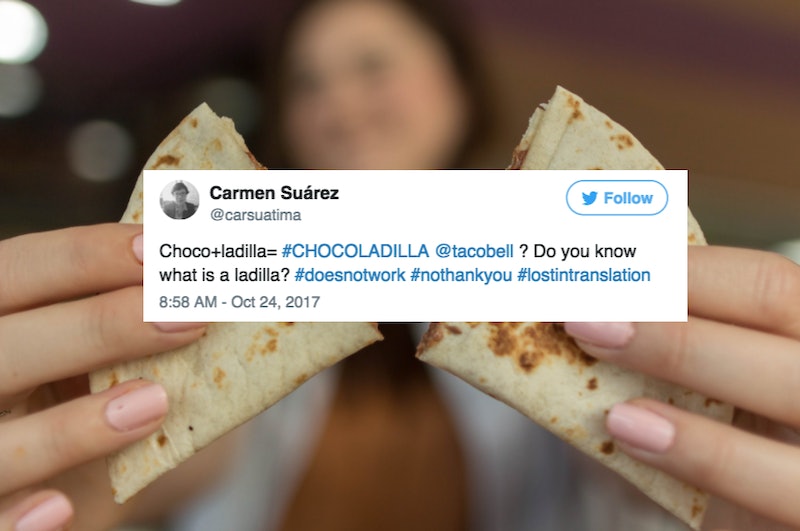 Have you been worrying that your 3 a.m. fast food runs were too healthy lately? Fear not — Taco Bell's Kit Kat Chocoladilla will ensure that you'll never again leave the premises without the proper combination of sugar high and nausea to keep you awake as you mentally review your regrets before bed. Taco Bell enthusiasts may recognize the name, as the chocolatey quesadilla was released in the UK last year. (Spanish speakers may also recognize the name, because "ladilla" is a Spanish term for pubic lice. Bustle has reached out to Taco Bell for comment on the less-than-appetizing comparison and will update when we hear back.)

So what makes a Chocoladilla? A large flour tortilla is filled with chocolate and crunchy wafers, then it's grilled until sweet, sweet perfection has been achieved. If Kit Kat bars aren't your thing, Brand Eating has reported that some Taco Bell locations are also offering a Twix version. Basically, it's a quesadilla made of bits of melted Kit Kat bars instead of meat and vegetables, also known as every American child's absolute culinary fantasy. Best of all, it goes for $1. I repeat: You can buy a tortilla stuffed with melted candy for less than the price of a pumpkin spice latte.

Well, as long as you're willing to travel to get your hands on it. According to Mashable, Taco Bell's creation has been spotted in several locations in Wisconsin, mostly in the Milwaukee area. It first showed up on Twitter, where several users posted photos of the dessert, and Mashable later confirmed that it is being tested in the United States through mid-November.

Although chocolate quesadillas have been available in the UK for the past year, they went by a different name across the pond. According to Brand Eating, the sweet treat is called the Chocodilla in other countries; Taco Bell may have altered it slightly for the American menu to avoid being too similar to other brand names. However, as mentioned above, the American name invites a different comparison. In Spanish, "ladilla" refers to pubic lice, which isn't exactly the kind of creature you want to envision when you're eating. According to Urban Dictionary, it's also common slang. "[Ladilla is] a word most used by the Venezuelan people, to refer of someone or something as annoying," explains the online dictionary's entry.

Naturally, it didn't take long for the Internet to notice the misstep. Plenty of pointing and laughing ensued.

But if you're into the idea of a Kit Kat quesadilla, a silly name is unlikely to make you stop craving one. Unfortunately, a Taco Bell representative told Mashable that only "customer response" will decide whether the Chocoladilla makes it past the initial round of testing.

This is far from the only time the fast food chain has forayed into food mashups. Since its release in early 2012, the Doritos Locos Taco — a taco made of Doritos chips — has become Taco Bell's most successful product launch in the chain's history. Then there was the short-lived Naked Chicken Chalupa, which used fried chicken as a taco shell, the line of biscuit tacos, and many, many other odd combinations. But while these stunt foods are weird, they still sound strangely tasty half the time. At this point, Taco Bell may want to consider opening a new section of the menu: "head-scratchingly delicious" foods.

So rejoice, chocolate lovers! Somewhere out there, Taco Bell employees are grilling Kit Kat bars in a tortilla to hand out to the munchy masses in Wisconsin. If you can't join them yourself, at least you have an idea of what to do with your leftover Halloween candy this year.