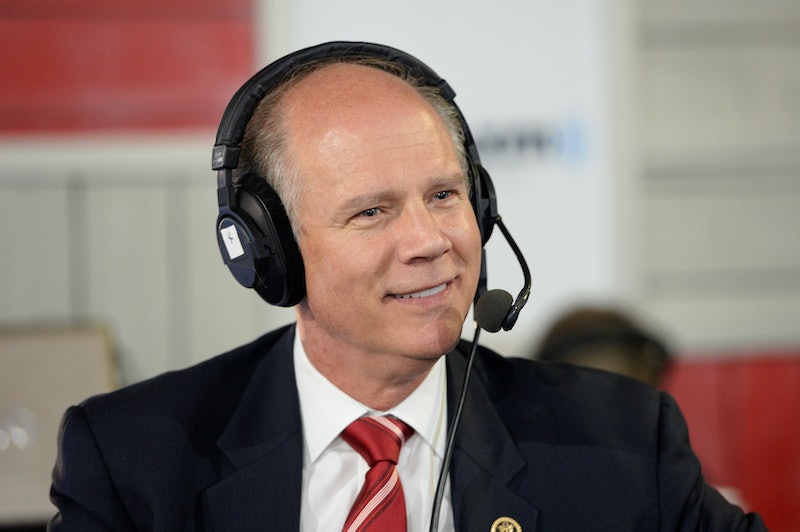 On Sunday, high school sophomore Gisele Mendez, member of New York nonprofit Make the Road, stood up to her congressman in a town hall meeting on Staten Island. The teen confronted Rep. Dan Donovan and took him to task over whether or not he would support a "clean" DREAM Act. By "clean," she means a bill that would provide a path to citizenship for minors brought to the United States without tacking on other stipulations, like funding for border control.

"We collected thousands of petitions to show you that your constituents from all sides of the spectrum - Republicans and Democrats - [do not] support having a bill that would terrorize immigrant families," Mendez said, reading a prepared statement off of her cell phone. As Whitney Kimball explains at Jezebel, the extra national security stipulations tied to bills that aren't "clean" would protect DREAMers while effectively increasing funding for programs that would target other members of their families.

Mendez went on to tell Donovan that her sister is protected under DACA. "I want to personally hand this to you so that you would know [that Staten Island] will not support families like mine being ripped apart," she said.

She then got to her question, asking Rep. Donovan if he would be willing to support a so-called clean DREAM Act. In turn, he attempted to deflect it by claiming Congress doesn't have the votes. "There will be a fix for DACA," he says. "There's not enough votes to get a clean DREAM Act." Donovan insisted that the only way to get a DACA bill passed is to attach national security stipulations to the legislation.

While this might be true, it doesn't answer Mendez's question, which is whether Donovan would vote for a clean DREAM Act at all, particularly in light of demonstrated constituent support. But before Mendez could push Donovan on the issue, he veered off into a tangent about a group of people who reportedly died in a van while attempting to cross the United States border:

About a month ago, about nine people died in the back of a van that was brought across our country because they weren’t given any water or air conditioning in that van. And my belief is that if that van had been stopped at the border maybe – I'm not sure when those poor people died – but maybe those people would still be alive today. So I support DACA, but I also support protecting the border. And there's not enough votes in Congress right now to get a clean DACA - clean DREAM Act bill passed without attaching some moneys for some kind of border security.

Mendez pushed back in response, requesting a clear answer. Much like the proposed legislation at hand, Donovan repeatedly linked the path to citizenship with national security.

"I’m in favor of fixing DACA, and I’m also in favor of securing our borders," he said when Mendez asked him to be more specific in his response to her question.

After a back and forth exchange, Mendez coaxed a straight answer from him. "A clean DREAM Act isn't going to get passed and I won't vote for it because I want border security and tax cuts," Donovan said. "I want both. I want your family protected and I also want those nine people who died in that van protected."

In the video shared on Facebook by Make the Road, someone is heard in the background saying that Donovan did not give a good answer.

In effect, I am not going to just cut DACA off, but rather provide a window of opportunity for Congress to finally act. We will resolve the DACA issue with heart and compassion — but through the lawful democratic process — while at the same time ensuring that any immigration reform we adopt provides enduring benefits for the American citizens we were elected to serve.