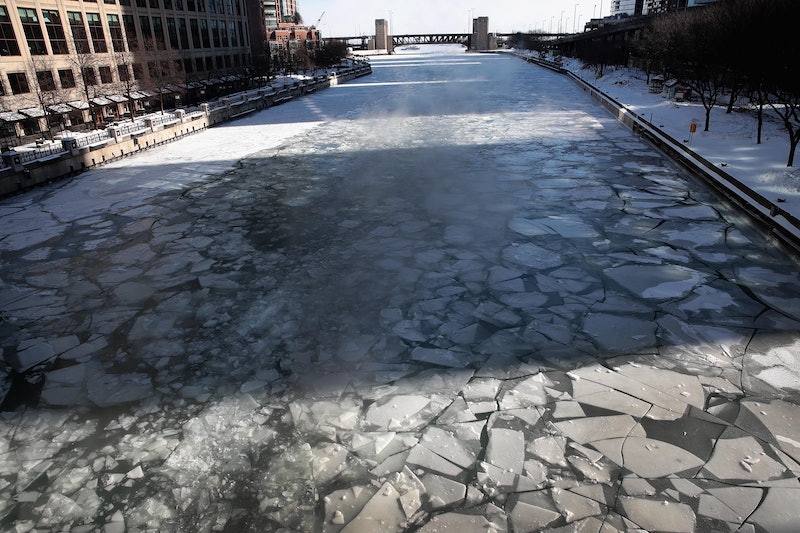 Some Chicago residents have reported hearing loud booms outside as the polar vortex sweeps across the city, and CNN reports that the phenomena may be "frost quakes" caused by the extreme weather change. Naturally, many people may be wondering what a frost quake is exactly.

The quakes, also called "cryoseisms," are somewhat rare, according to Live Science. They occur when water saturates the ground, freezes (thereby expanding), and splits the ground with a booming sound. In extreme circumstances, frost quakes are believed to have the power to shake homes. They're nowhere near as dangerous as earthquakes, but they are technically in the same category — it's just that "the driving force is temperature rather than tectonic forces," geologist David Eaton told Radio-Canada in 2014.

WGN-TV reports that many people in Chicago heard booms during the night on Tuesday. "I thought I was crazy! I was up all night because I kept hearing it," one women said on Wednesday, according to the outlet. "I was scared and thought it was the furnace. I kept walking through the house. I had everyone's jackets on the table in case we had to run out of here."

While it hasn't been confirmed that the phenomena in Chicago were frost quakes, it's highly possible that they were. "All of the ingredients were certainly there," as ABC's Melissa Griffin put it on Wednesday.

The temperature in Chicago has dropped to record-breaking levels for these particular days in January, according to CBS. There's even a chance that it could fall to -28 degrees or lower, which would break the city's all-time record for the lowest temperature recorded, per CBS.

But Chicago isn't the only place that seems to be experiencing frost quakes. They've also been reported in Ohio and Pennsylvania, according to the BBC. Dillsburg resident Michelle Tebbetts told WHP-TV on Tuesday that she'd heard a similar booming: "It sounded like a big piece of furniture fell over... and I'm thinking, what did the cats knock over that was that big and that loud?"

Tebbetts reached out to a geologist for answers. "He said he's gotten a bunch of calls from people," she told WHP-TV. "He said, 'You are having a frost quake.'"

"These frost quakes, they sound more like a boom or a bang and then we get a little shake in the house," Steven Tebbetts told the outlet. "Who knew that Dillsburg would be the California of the east?"

Frost quakes have even been known to occur in the South during extremely cold weather. During a record-breaking period of subzero temperatures in Spring Hill, Tennessee in 2015, WKRN reported that some residents called 911 to report booming sounds. "It sounded like an explosion," one caller said. "It moved the floor. They say it sounded like a plane hit the building. But it was three different buildings."

National Weather Service meteorologist Bobby Boyd told ABC at the time that he's never heard of an instance in which a frost quake damaged someone's property. He said he's not sure whether it could ever happen, but that the quakes generally occur in ground that's too shallow. Boyd also stressed that the quakes are normal.

"Any movement in the ground where you have frost and freeze, even without the explosion, can cause cracks in sidewalks or heaving in the soil," he told ABC.