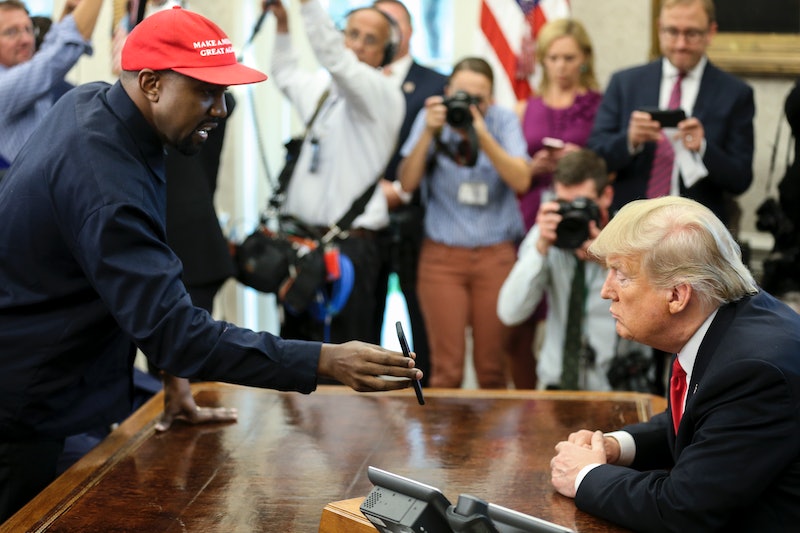 Kanye West met President Donald Trump in the Oval Office on Thursday for a meeting that was just as peculiar as you'd expect. At one point, West suggested an aircraft that he believed could replace Air Force One. If you watched the exchange, you might be wondering what a hydrogen-powered plane is.

Most planes are powered by petroleum-based fuels. But as part of efforts to increase sustainability, inventors are increasingly designing experimental planes fueled by power sources like electricity and hydrogen. Hydrogen is considered to be more environmentally friendly than petroleum because it emits very few greenhouse gases and can be produced from a wide variety of natural resources, according to the Alternative Fuels Data Center.

"I brought a GIF with me right here," West told a room full of reporters and White House officials on Thursday. "This right here is the iPlane 1. It's a hydrogen-powered airplane, and this is what our president should be flying in. We're going to have Apple, an American company, work on this plane."

Air travel produces a large carbon footprint. In fact, depending on how often you fly, it could constitute a significant chunk of the emissions for which you're responsible. According to The New York Times, a roundtrip flight from Europe to San Francisco, or from New York to Europe, generates about 2-3 tons of carbon dioxide per passenger. Americans typically produce about 19 tons a year, which means that single flight could account for about 13 percent of your annual footprint.

That's where alternative fuel sources come in. Many vehicles are already powered using hydrogen, including NASA's rockets and some electric cars. But airplanes have taken longer. German researchers flew the first hydrogen-powered plane that could carry more than a single rider in 2016. Passenger planes are also in the works, but they'll be a while: A prototype of the first one is scheduled to have its maiden journey in 2025.

As far as how the hydrogen fuel works, the process involves combining hydrogen and oxygen to incite a minor explosion within a fuel cell, which sends an electrical current to the motor. "But there is no bang," engineer Andre Thess told CNN in 2016. "Just electricity and water vapor as the exhaust gas. It's a way of taming this explosion and extracting electric energy directly from hydrogen and oxygen."

It's unclear what specific plane West was referring to in his conversation with Trump. Apple doesn't seem to have publicized any plans to build the iPlane 1, but it's potentially conceivable that West has been talking to the company about it. Or else those GIFs are his own.

But the president apparently took well to the idea. "We'll get rid of Air Force One," he told West, per Bloomberg.