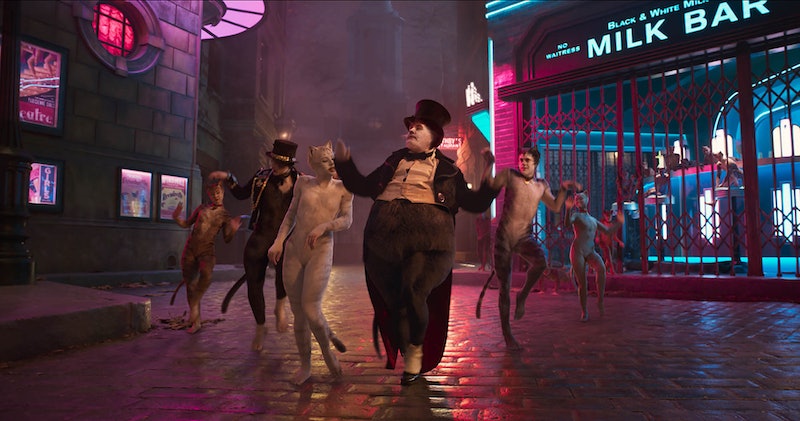 The cats in Cats aren't regular cats — they're cool cats. Most of the felines onscreen, including Jennifer Hudson's Grizabella, Jason DeRulo's Rum Tum Tugger, and Taylor Swift's Bombalurina, are Jellicle cats. These strangely talented creatures introduce themselves one-by-one via song to show off their skills, in a bid to get chosen by Judi Dench's Old Deuteronomy to be reborn at the Heaviside Layer. But what exactly is a Jellicle cat?

The answer to that question is not made clear in the new film. It's not a breed, as all the cats feature different coats and colors. And it's not a reference to a place, as they all live in London. In fact, it turns out that even fanatics of Andrew Lloyd Webber's original stage production, based on T.S. Eliot's poetry book Old Possum's Book of Practical Cats, don't have many answers when it comes to the mysterious moniker. According to The Telegraph, the term "jellicle cats" originates from Eliot's 1936 poem "Pollicle Dogs and Jellicle Cats," which Webber unveiled in 2002. "Jellicle cats" is reportedly a contraction of "dear little cats," and "pollicle dogs" means "poor little dogs."

As reported by the outlet, Jellicle cats were first described in another Eliot poem, "The Song of the Jellicles," as commonly noctural, black-and-white cats. This is where the Jellicle Ball, the event where the Cats gather to perform in front of each other and Old Deuteronomy (also known as the moment in the movie when Swift finally makes her appearance), is first mentioned as well.

Old Possum's Book of Practical Cats contains poetry about many of the main felines seen on stage and in the new film. In his musical, Webber expanded these cats into full-blown characters, each with their own journey and personality quirks, but still calling them all Jellicle cats. Without any real answer as to what makes a cat a Jellicle cat, it seems the main thing that binds these characters together is their stupendous theatrical talents, and their shared desire to be reborn at the Heaviside Layer. This may be what distinguishes the Jellicles from so-called regular cats.

Whatever they are, these felines can sing and move better than most humans can, and it's enough to make anyone wish they lived in a Jellicle world.