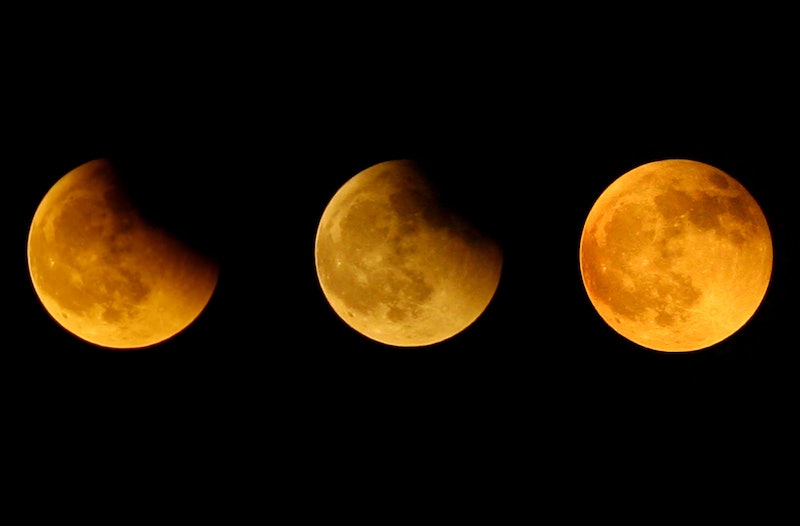 Summer is the perfect season for star-gazing, with clear skies and warm temperatures. This season will be a particularly good time to look up to the heavens, as a lunar eclipse is expected to take place this August. Though your view of the astronomical event will vary depending on where you are, many regions of the world are expected to see parts of the eclipse. So, what is a partial lunar eclipse, and what exactly can we expect to see?

As EarthSky.org explains, there are three kinds of lunar eclipses: partial, total, and penumbral. Each occurs when the Earth moves between the sun and the moon, casting a shadow on the moon. In the case of a partial lunar eclipse, the moon, the sun, and the Earth don’t align in a perfectly straight line. So instead of completely covering the moon, only a portion of the Earth’s dark shadow (officially known as the umbra) covers the moon’s face — essentially taking a bite-sized fraction out of the moon.

This year, the partial lunar eclipse will take place on Aug. 7. The Earth’s umbra is expected to cover about a quarter of the moon’s southern region, with mid-eclipse occurring at 6:20 UT. Though North Americans won’t be able to glimpse the fragmentary covering of the moon, the partial eclipse will be visible from much of Europe, Asia, Australia, Africa, East in South America, Pacific, Atlantic, Indian Ocean, and Antarctica.

The total duration of the eclipse — from when it begins to when it reaches its maximum to its end — will reportedly be around five hours, so those in the right spots of visibility will have a good chunk of time to find their best view.

So mark your calendars and start planning your viewing party! There’s plenty of action to witness in the sky this summer.