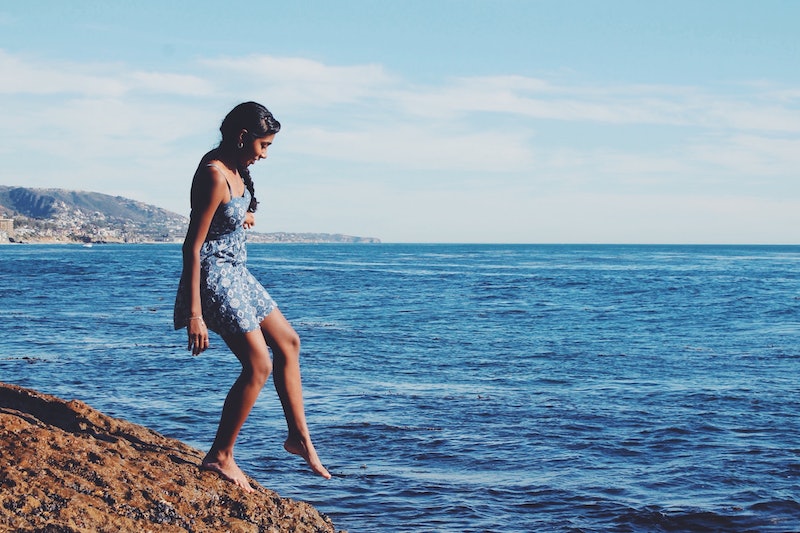 Gone are the halcyon days of early Instagram, when every duckface was planned to meticulous perfection. Apparently, a new photographic trend called the "plandid" is sweeping the app, and it's all about appearing natural — just not too natural, because social media is a judgmental place. Of course, given that this is a basic modeling technique, you've probably been doing this all along, so give yourself a pat on the back for being ahead of the curve.

As you may have guessed, plandid is a portmanteau of "planned" and "candid." According to the Urban Dictionary entry, which dates back to 2010, the contradictory term refers to a picture "meant to look like it was taken unbeknownst to the person in it." Unlike a posed photo, a plandid is supposed to look as spontaneous as an unwanted pregnancy, but unlike a true candid, a plandid is carefully staged. While it probably took 47 poses and some light bribery to convince your friend to keep trying for the perfect shot, the end result looks totally casual. Oh my god, someone was taking your photo as you gazed pensively into the horizon? You had no idea. You were too deep in thought to even notice.

Most plandids are solo shots, with the subject looking anywhere but the camera. To look at the camera would be to admit that you knew you were being photographed, although an exception can be made if you look like you were caught in the act. Take, for example, this old-school photo of yours truly.

That, my friends, is a plandid. Not a great one, but it still fits the category. Other common examples include someone laughing uproariously over lunch, pushing their hair out of their faces on a windy beach, climbing out of a pool, and moodily lounging against a wall.

Again, these aren't actual candids. Users control exactly what they look like, leading Man Repeller to refer to the plandid as a "super-selfie." Celebrities have been doing this since the dawn of Instagram, although some use the technique more often than others. At this point, Kylie Jenner could teach a master class on the subject.

So, how are you supposed to plan your best plandid? There appear to be a few main points. First, take approximately a million photos, so you'll have more choices later. If your phone has a "burst" function, use it. Second, whether you're going for "happy lady with salad" or "philosopher atop a mountain," put on your best emoting face and aim it away from the camera.

Finally, don't take it too seriously, or you'll ruin the whole casual vibe — a cardinal sin in this case. I would wish you luck, but most of us have been posting plandids all along. You're probably as much of an expert as any Hadid or Jenner by now.