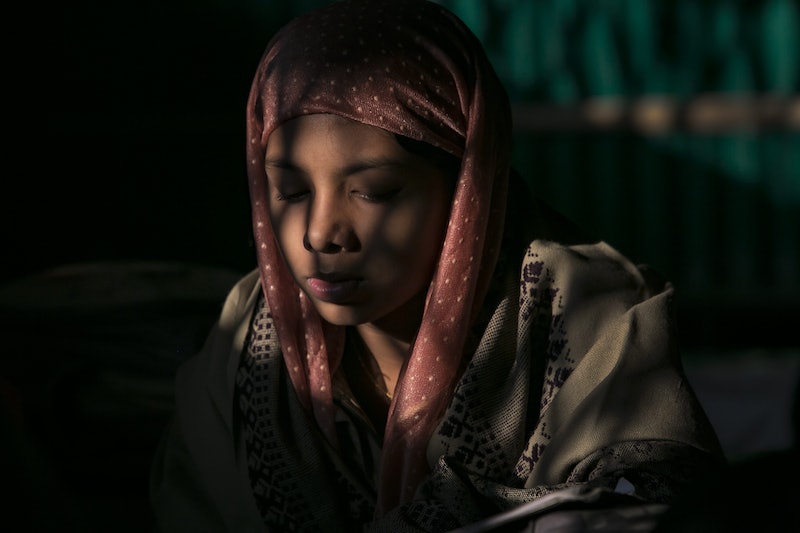 Each day violence forces thousands of people around the world to flee their homes and seek safety in new and unfamiliar places. They become refugees or asylum seekers, leaving everything they know behind in the hopes of building a safer future for themselves or their families. As part of the Trump administration's "zero tolerance" immigration policy, the White House has made it more difficult to obtain either refugee or asylum status in the United States. But are refugees and asylum seekers the same? While each is a protective status, there's some important differences between the two.

Asylum or refugee status can be granted to anyone who has been "persecuted" in their country of origin or who fears they will be persecuted as a result of their race, religion, politics, or membership in a particular social group, according to U.S. Citizenship and Immigration Services.

Both individuals seeking asylum or entry into the United States as a refugee must meet the legal definition of a refugee as laid out in the Immigration and Nationality Act, so a refugee and an asylum seeker are essentially the same. There is one key difference in the two classifications, however: where the person applies for protection.

The criterion for being granted status as a refugee or asylee is the exact same, "so the bar for a successful application is the same," Shannan Mattiace, a professor of political science and international studies at Allegheny College, tells Bustle.

Here's where the exact distinction lies: An asylum seeker is either already inside the United States or is physically present at a legal port of entry. Someone seeking to enter the country as a refugee applies for protection from abroad.

Applying for asylum via the defensive process means that an individual files their petition for asylum in defense of removal from the country. For this, the applicant must be involved in removal proceedings with the Executive Office for Immigration Review in immigration court.

Refugees, on the other hand, undergo a thorough vetting process before they ever enter the country. The president consults with Congress each year to determine the specific number of refugees the United States will accept that year. President Trump announced last year that he planned to lower that number from 110,000 to 45,000.

"Even Americans sympathetic to refugees and their plight, I don’t think they have an understanding of how absolutely difficult and rare it is to get refugee status in the world," Mattiace says. "There are millions of people living in camps... and we accept only in the tens of thousands of refugees, even under the most sympathetic of American administrations."

Obtaining refugee status in the United States can take years. The process can be a little faster for asylum seekers who are already in the country, but they still face a long legal process. Asylum seekers are required to prove that they're in danger because of their race, religion, politics, or affiliations with a certain group.

"Just because things are bad in your home country, or because there’s gang violence in your home country, it’s not enough to establish an asylum claim," says Jacob Monty, an immigration attorney based in Houston who previously served on Trump's Hispanic Advisory Council. "It’s really tough, and what’s more is you have to have some evidence that you’re being targeted."

In an attempt to make the qualifications for asylum seekers more strict, Attorney General Jeff Sessions said earlier this month that anyone claiming fears of domestic violence or gang violence shouldn't be granted asylum. His action didn't change the fundamental definition of an asylum seeker, but rather made it more difficult for someone to prove that they should be granted protection.

"Even before this announcement, it was very hard to establish asylum," Monty tells Bustle. "Now it’s even harder."

Refugees and asylum seekers alike are fleeing dangerous situations in their home countries — from war, to genocide, to gang violence. Only a small percentage of those seeking either protection are granted legal status in the United States each year, and those numbers are quickly diminishing under the Trump administration's "zero-tolerance" approach to immigration.

More like this
Are John Legend & Kanye West Still Friends? The Singer’s Latest Update Is Candid
By Brad Witter
Rishi Sunak's Wife Is Worth More Than The Queen
By El Hunt
It’s Official: The UK Is Hosting Eurovision 2023
By Sam Ramsden and Rachel Mantock
Charlene White & MPs Lead Tributes For Bristol Bus Boycott Organiser Roy Hackett
By Sam Ramsden
Get Even More From Bustle — Sign Up For The Newsletter